Parents make a difference by getting involved with dance program

For Akilah Cage, a former South Side resident who runs a dance program for youth citywide, support from the parents of her young students has made all the difference in the success of her work. “With parental involvement, it allows the kids to feel just as good as they do here with me, at home,” Cage said.

Cage runs Young and Talented Performing Arts Kompany, a nonprofit business that teaches styles of dance ranging from urban funk to jazz to break dancing. The program, which is housed at the James Street United Methodist Church at 3027 James St., is in its ninth year.

Christine Cook, who is a member of the parent-run board of directors for Young and Talented, said Cage is not only a good teacher, but also a positive role model for the students. She said the parents are really there to support Cage as well as the children. 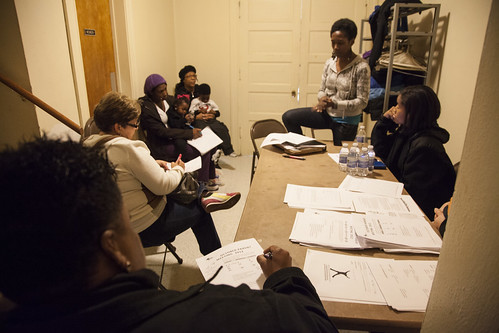 Akilah Cage, center at right in light shirt, talks with parents and leaders about upcoming aspects of the dance classes. Cage has run the Young and Talented dance program for the city's youth for nine years. Something Cage has stressed since she started the program is the parental involvement with the dance company. | Taylor Baucom, Staff Photo

“The engine behind us and the main force is the positive energy of Akilah Cage,” Cook said.

Teaching came easy for Cage because she said she has been dancing since she was 5 years old and teaching dance since she was 14. She also has a degree in criminal justice from Onondaga Community College and studied dance, theater and psychology at Middle Tennessee State University, located in Murfreesboro, Tenn.

Cage, now 32, wanted to find an affordable and meaningful way for young children to learn to dance. When she was growing up in Memphis, Tenn., Cage said she had to pay for dance lessons — something that she didn’t want to happen to the youth in Syracuse. So in 2003, Cage formed Young and Talented and started giving formal dance lessons in her basement on Seeley Road.

In the beginning, Cage said parents would treat her program as a daycare. But when she began charging $5 for lessons, she said parents began respecting what she was doing and looked for ways to help. Once Cage decided what she wanted her organization to accomplish, she looked for parents to help her build the program.

“I found I was taking on the roles of parenting and teaching at the same time,” Cage said. “What I’ve found, too, is when it’s just the teacher and the child, the parent comes in, takes the child out whenever they want to, regardless of what’s going on with the child.”

Now, Cage charges $45 a month for multiple dance lessons at Young and Talented. Since the formation of a parent-run board of directors in 2008, Cage said more parents have become involved not only with the program, but with their children as well, resulting in more positive results from her students.

Cage, who also teaches dance at area schools and for Say Yes to Education, Inc., said she asked parents to volunteer time, donate food to the concession stand at talent shows, and carpool with other parents. After moving from the South Side to her current location, Cage decided she could not run the program on her own and enlisted parents of her students to form a board of directors in 2008. This board, which is composed of seven parents, helped Cage handle money, advertising, teaching and organizing the program.

Bernadette DeMott, who has been a board member all four years, said Young and Talented could not exist without parental involvement. DeMott said every parent plays a role in the program. Some provide transportation for the students and others volunteer their time at events and competitions. DeMott, who used to be Cage’s English teacher at Henninger High School in 1996, 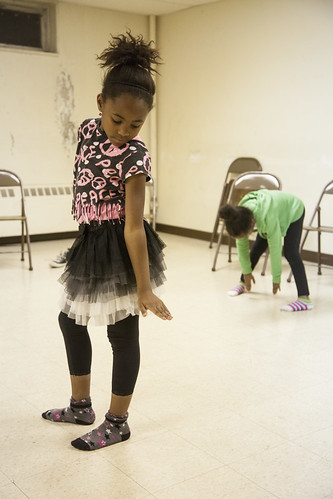 Aliyah Crouch waits for a song to start during her jazz dance lesson at the Young and Talented dance program at the James Street United Methodist Church. Former South side resident Akilah Cage has run the program for nine years. | Taylor Baucom, Staff Photo

serves as assistant director and handles all of the money and communication among board members; she also proofreads brochures and fliers. DeMott said since Cage created a safe and comfortable environment for the students, parents feel just as comfortable getting involved.

“It’s the difference between them being successful and not,” she said.

For Cook, working with parents creates a team mentality that also has a positive influence on the students. Cook said parents regularly attend dance rehearsals and shows now.

Cook said she, like many of the other parents, is very involved with Young and Talented. She said she drove students to rehearsals and bought matching clothing for competitions. But for some parents, especially single parents, it is tough to be involved.

“When parents aren’t involved, I don’t think you can really fault the parents because they have so much on
their plate,” Cook said.

When more children began joining the program, parents started wanting to be more involved in the decision-making process, said fellow board member Katishma Grey, who teaches urban ballroom dancing for Say Yes. She said parents and the board work with Cage to make the best possible program for the children to succeed as students of dance and as human beings.

During the season, DeMott said parents meet once a month to discuss how everyone can be involved. The meetings are held to find the strengths among the group of parents and determine the best course of action for helping the program.

“The kids are inspired by the parents being involved,” Grey said. “They want to impress their parents and show them what they’re capable of.”

“When you see the parents are pushing just as hard as you, that means they see their child’s gift,” Cage said.

See a video by The Stand on YAT PAK from last year:
featured YAT YATPAK Young And Talented 2012-11-03
admin
Share !