Schools in Syracuse engage students in how to respond to conflict

Imagine hearing this in grade school: “You’re the dumbest girl I’ve ever met.”

That’s what 10-year-old Vanessa Williams heard one girl say to another in her fifth-grade class at the Southside Charter Academy.

She’s concerned that the class bully is going to continue for the rest of the year. 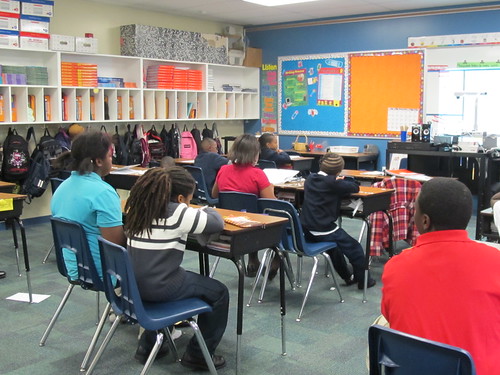 “[The bully] is mean,” 10-year-old Brad Everett said. He’s in the same class as Vanessa.

Bullying happens “all the time, everywhere,” according to Candace Johnson, the school social worker at the Southside Charter Academy. She works with the school’s 650 students and 30 homeroom teachers on bully prevention.

One in four students say they are bullied at least once a day, according to the Department of Education.

Her goal is to turn bystanders into “upstanders.”

Teachers can become bystanders, too, according to Sapon-Shevin.

“Teachers hear it, and they don’t do or say anything,” she said. “When schools don’t do anything, that’s the equivalent of saying, ‘This is OK.’ It’s kind of like a wink and a nod.”

Eighty percent of kids who have been bullied or harassed have never had an adult intervene, according to research by the Gay, Lesbian and Straight Education Network.

As a school social worker, Johnson does not want to be part of that statistic. She counsels students weekly about bullying, teaching them about conflict resolution, assertive responses, and how to be an upstander.

The Southside Charter Academy has its own check on bullying behavior.

A program called Capturing Kids’ Hearts teaches students to monitor one another. If one student senses that another is being a bully, he or she will give thumbs up. Then the perceived bully has to say something positive about the perceived victim.

“It’s not an end-all solution,” Johnson said. But she said it’s a start.

When Brad noticed his classroom bully “ripping on everyone around,” he decided to speak up. “I told her it really wasn’t necessary. And then I went and told my teacher,” he said.

Despite Brad’s efforts, the victim’s feelings may not have been spared. “I think I saw her crying,” Vanessa said.

Since school lasts most of the day and children aren’t allowed to leave, the bullying can feel inescapable to some.

“When you’re a kid and you’re in school, you’re sort of trapped. You don’t have the freedom to leave, like adults do,” Sapon-Shevin said. “So it feels like [the bullying] is the whole world. That’s why we have to take this issue very seriously.”

Johnson said at the Southside Charter Academy they take bullying so seriously that they’re integrating workshops and seminars on anti-bullying tactics and are focusing on “character education.”

When students are caught bullying, the punishment can range from detention to suspension. Sometimes, Johnson has the student conduct a presentation for the entire school about the dangers of bullying.

Sapon-Shevin thinks character education should be up there with reading, writing and arithmetic.  “Everyone is so concerned with achievement, but if you’re worried that you’re going to get beat up on the playground, or come this weekend you’re going to have no friends to play with, it’s really hard for you to learn your math or social studies,” she said.

Lura Lunkenheimer, president of Peaceful Schools in Central New York, said bully prevention programs like her own are often seen as “luxuries rather than necessities.”

Peaceful Schools used to hold bullying workshops in 17 Syracuse schools. After a late state budget, Peaceful Schools received less funding from school districts. It is now only working in one school in the Syracuse City School District: the Delaware Academy. 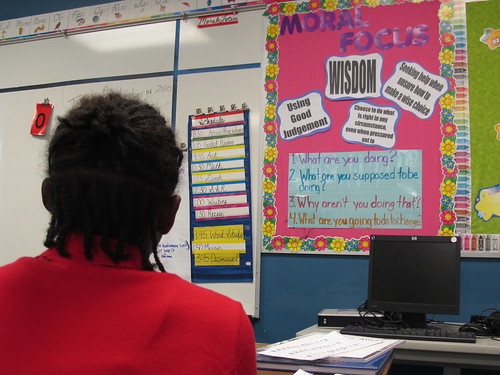 “Schools have been up against layoffs … and the districts have really had to make incredibly hard choices,” Lunkenheimer said. “All of their resources are focused on how to maintain [academic] instruction.”

But according to Lunkenheimer, bullying education is “an essential part of creating a safe community for our kids to learn in.”

Johnson agreed, and stressed that bully-proofing schools has to involve more than teachers. It’s a community issue.

“We don’t expect overnight success, nor do we claim to have the magic wand,” she said. “We understand that we can’t always control what happens to our students when they leave school ground, but we do know that, with the program that we have in place, our school is headed in the right direction.”