Students Represent the South Side Community at a Citywide Art Performance

Students, artists and community activists from the four quadrants of the city — South Side, Eastwood, West Side and North Side — came together to produce a unique, citywide puppet performance titled Art-in-Motion to celebrate the diversity and creativity of each neighborhood and foster an overall sense of community in Syracuse.

Held outside in front of the Milton J. Rubenstein Museum of Science & Technology (MOST) in downtown Syracuse Saturday, Sept. 11, 2010, afternoon, Art-in-Motion was free to the public and featured large papier-mâché puppets, dance and theatrical skits that represented each neighborhood.

For the South Side performance, a group of 10 talented kids chose to highlight the neighborhoods’ love of block parties with a dance performance, which included a large papier-mâché puppet, to the song “Show Out” by DJ Unk.

“We wanted to do stuff that represents the South Side,” said 15-year-old Shunda Smith, Art-in-Motion performer and resident of the South Side.

The performance featured a spoken word element, where the kids discussed the history of hip-hop and their love of music and its impact on their lives. Then the performers broke out into a lively choreographed dance that elicited cheers and clapping from the crowd.

The South Side youth who participated in this multicultural art performance had a strong desire to represent their neighborhood to the greater Syracuse community.

“I wanted to represent the South Side,” said Corey Bones, 14, performer and resident of the South Side. Fellow performer Teyondra Reese, 15, who got involved with Art-in-Motion through the Southside Community Coalition, said she participated because she wanted to make a difference in the community.

Other South Side youth were excited for the exposure to the arts. Performer Kanicia Dunning, 14, said, “I wanted to do [the Art-in-Motion project] because I wanted to build a puppet.” It took the group two months to build the puppet, explained Dunning. “It was a long process,” she said. 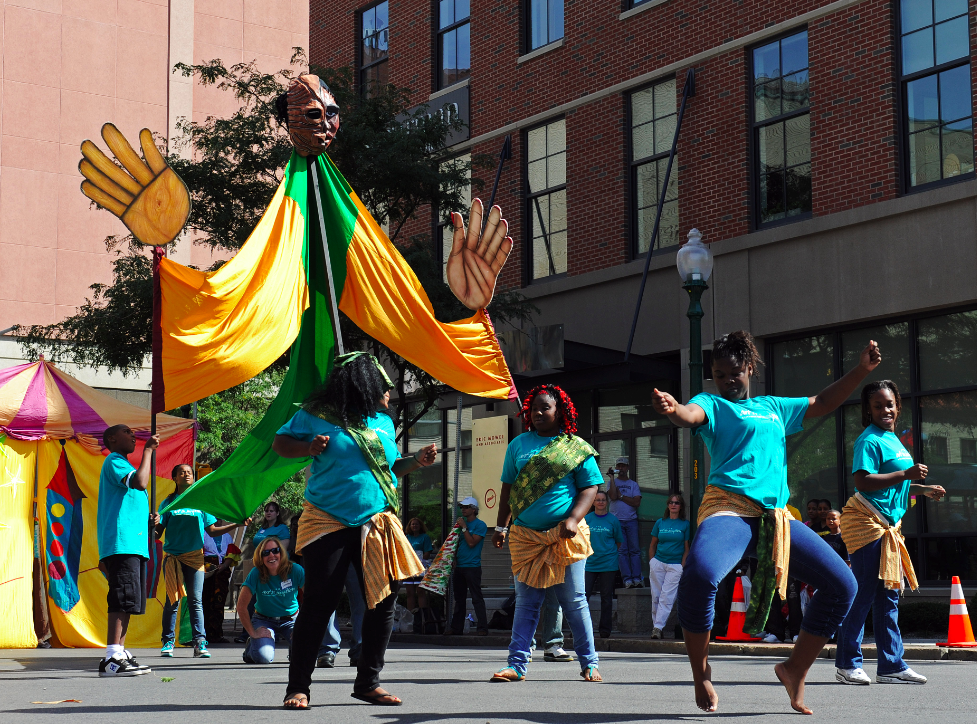 Under the guidance of Lauren Unbekant, director of educational outreach at Syracuse Stage and a professor in the drama department at Syracuse University, the South Side youth were introduced to art, theater and performing. Through the project the students learned how to take their ideas from concept to execution using their own talents. “I think on some level it’s really more about the process than it is the product,” Unbekant said. “And that’s what I really wanted them to get out of it.”

Art-in-Motion gave the South Side youth ownership of what they’re doing, explained Unbekant. “They’re the ones who basically had to come up with the piece and do the work and I was just there to help and guide them,” she said. “But it was really about, especially [for the South Side] community, to perform, be out there, and be part of the larger community.”

Art-in-Motion was the result of careful planning and community collaboration over many months. Imaging America initiated the project with Open Hand Theater, Syracuse Stage and the Syracuse University Office of the Arts Presenter, along with participation from various community organizations, such as the South Side Community Coalition.

Calmesha Givens, chair of the cultural committee for the South Side Community Coalition, was primarily responsible for bringing the South Side youth together for Art-in-Motion. Though the initial group of performers was much bigger (around 25 kids) when it first began in the spring, Unbekant said, “this is our core group that was there at the beginning and they stuck through it.”

The Art-in-Motion organizers main goal with the event is to use the arts to strengthen city neighborhoods and stimulate urban redevelopment in Syracuse. Accordingly, event organizers held a follow up public conversation on Sunday to reflect on the puppet performance and experience at The Warehouse in downtown, with the hopes of making Art-in-Motion an annual event.