Every day after school, Monique Bloomfield’s three children turn off the television, put away their video games and crack open a book.

“From pre-K, we’ve had that rule: no watching TV during the week, except on Fridays when they come home,” Bloomfield said.

She has two children enrolled at Southside Academy Charter School and one in public school. They all enjoy reading.  That’s because they’re accustomed to switching off their electronics to study, Bloomfield said, and because children emulate their parents. 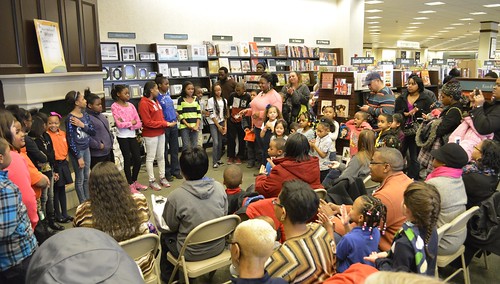 “Myself and my husband, we read a lot,” Bloomfield said. “So, they see us doing it, and basically follow what we do.”

As part of National Reading Month, Southside Academy is encouraging parents to be more like Bloomfield. Through March, the school is conducting an electronic and television blackout, which requires students and parents to shut down their computers, cell phones and other devices and read for at least an hour each night.

Every week, students complete and turn in reading logs. On Mondays, teachers post the total number of minutes for each student and homeroom class on a bulletin board near the school’s entrance. Each week’s winners are announced over the intercom, said Delvin Vick, principal of Southside Academy.

“So, it’s a big competition for classes. Intermittently, we have pizza parties and different prizes,” Vick said. “Like next week, our big prize is students who go get a new library card by Wednesday, [are entered] into a drawing for a Kindle Fire.”

While enrollment has been strong during his two years as principal, Southside Academy has been struggling academically, Vick said, and reading levels are especially declining. The electronic and television blackout is meant to boost parent involvement, students’ interest in books and their reading stamina.

“This is a small start,” Vick said. “But the overall thing is to get parents involved, teach kids that reading is not scary, that in the end, it’s fun.”

As part of the blackout’s kickoff, around 75 parents, children and teachers crowded in a corner at Barnes & Noble to listen to different student choruses. The large turnout surprised and encouraged Vick, especially since the event was coordinated quickly. He suspects it’s because parents love to see their children perform.

“Parents will step up and step in if you give them an opportunity,” Vick said. “So, I’m learning as a principal, we have to give parents more opportunities to get involved in their child’s education.”

When parents and teachers get excited about reading, their passion rubs off on students, Vick said. But students who simply don’t like to read need further motivation – they have to find subjects that interest them. “If you like soccer, well let’s read about soccer. Let’s read about your favorite players,” he said. 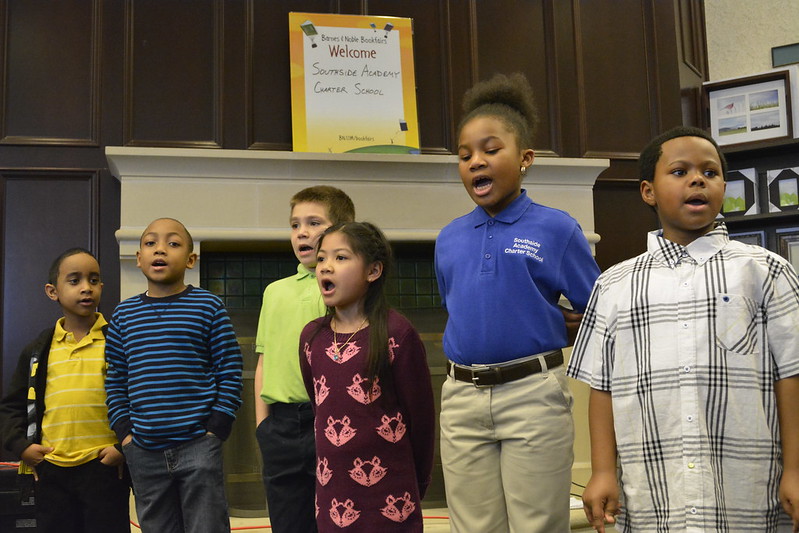 Southside Academy second-graders sing “Yes, You Can” at Barnes & Noble, as part of the school’s electronic and television blackout kickoff.

By the end of March, Southside Academy’s goal is to reach 1 million minutes of reading time.  Teachers started reading logs in February, when students were encouraged to read for at least 30 minutes each night. Now, the school is at around 100,000 minutes.  To meet its target, teachers will also include the time students spend reading in school, said Hayley Downs, a seventh-grade English teacher.

While incentives, such as pizza parties and dress-down days, push more students to read after school, challenges, such as a lack of resources, prevent some. Downs said one of her students explained why he was not submitting his reading log. 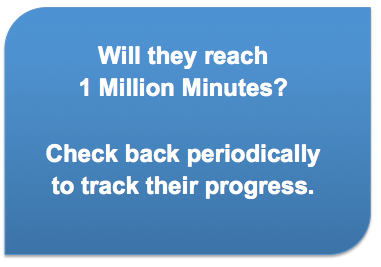 The student explained: “‘Because I don’t have any books at home,’” Downs shared.

For students who don’t have anything to read, she keeps a library stocked with books in her classroom.

On March 28, the blackout’s series of activities and prizes will culminate in a reading recital, during which students, parents and teachers will narrate passages from their favorite books. Those who attend the recital will have a chance to win prizes, such as furniture from Raymour & Flanigan, Kindle Fires and Visa gift cards. Also, at the conclusion of the month, the three homeroom classes with the most reading minutes for each wing will win pizza parties.

Monique Bloomfield’s daughter Nylah, 6, is in first grade at Southside Academy. Currently her class is ranked fourth in her wing, which includes kindergarten through second grade. Even though she started reading just 10 months ago, her passion shows. Her favorite book is “Say Hello in the Jungle.”

“I like reading a lot,” Nylah said. “Mommy got me into it because when she reads, sometimes she reads to me.”

— Article and photos by Valerie Crowder, Journalism student at the S.I. Newhouse School of Public Communications 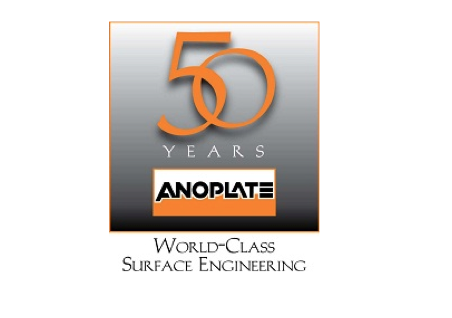