The Southside Academy Charter School found a new way to promote critical thinking in its classrooms and it’s in a way that no other school in the Syracuse City School District has tried.

The charter school now offers a philosophy class to its eighth graders in the junior honors society. The class is held every Friday and is taught by Syracuse University Professor Dr. Mark Heller and three philosophy doctoral students: Amy Massoud, Jake Greenblum and Preston Werner. 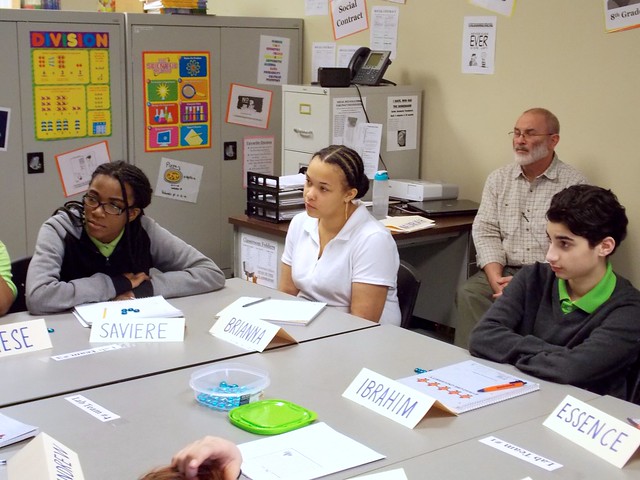 Anton Ninno, a tutor at the charter school, proposed the idea of starting a philosophy class to Ben Bradley chair of the SU Philosophy Department, and asked if there would be anyone interested in teaching the course. Ninno thought a philosophy course would be a great way to facilitate critical thinking, a key aspect of learning being encouraged by the national Common Core State Standards.

The Common Core State Standards are academic goals that outline what students should know at each grade level according to corestandards.org. These standards are maintained by the National Governors Association and the Council of Chief State School Officers. Right now, the common core wants teachers to move away from preparing students on how to take a test and start focusing on teaching how to comprehend the material and think critically.

“It’s not just about memorizing facts,” Ninno said. “Students have to learn how to interpret things and how to rewrite them in their own words. And I thought who does more critical thinking then philosophers. That’s what they do literally to make a living.”

Ninno says that while many people may think philosophy is too arduous for young kids, universities across the nation are now offering programs that train college students to teach philosophy to children; some of these universities being Creighton University, University of Washington and St. Joseph’s College.

“It was once thought by psychologists like Piaget, that due to brain development children can’t reason like that until they’re older,” Ninno said. “We’ve since found out that that’s not necessarily true. They just do it a little differently and not as deeply.”

The Honors Society eighth graders were given a presentation on what the class would entail and then offered the chance to take the course in place of an elective or a study hall. Out of the students who sat through the presentation, 10 are enrolled and attend weekly.

The class follows the structure of the Socratic Method – presenting a series of simple questions and from there try to reach the truth by questioning what the students think they know.

The instructors teach in pairs – Dr. Heller and Werner, and Massoud and Greenblum – switching off every other week. Each class is based on one philosophical theory or concept, which is introduced at the beginning of the class and then discussed.

For example, one class was devoted to the Trolley problem. The instructors told the students to imagine they were on a trolley that is heading down a track that will eventually hit and kill four people. The dilemma is they have the option to hit a lever that will switch the trolley onto a track that will only hit and kill one person. The students have to make a decision on what they would do and then compare their conclusions with the rest of the class. 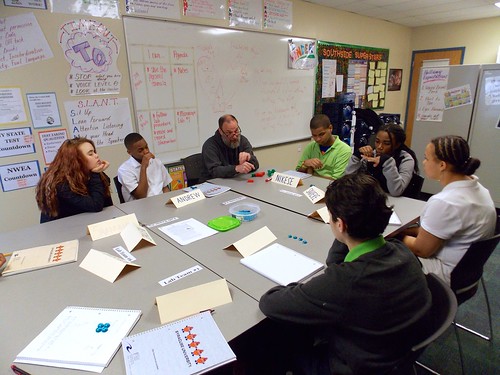 “We challenge them to think about these types of scenarios in a discussion based setting,” Greenblum said. “It’s different from teaching our undergrads (at SU) introductory philosophy because we’re not asking the students to do assignments. We just want to introduce them to the concepts and get them thinking.”

Eighth-grader Brianna Johnson, 14, one of the enrolled students, says philosophy has become her new favorite subject over her long time choice of social studies. She says she was originally interested in the class because it seemed like a college course and she wanted to take it so it would set her apart from other students in the future.

“I wish I could have philosophy every day,” Johnson said. “In other classes you get something wrong and you feel bad about it. But in philosophy you get your own perspective and you can put it out there and go step by step. I like that we can have our own opinion and not get judged for what we say.”

Johnson says the class has given her a new perspective about life and how one has to take risks in order to find out what something is all about.

“We want there to be more of a fun feel to the class,” Massoud said. “We don’t want there to be too much lecture because we want to keep the kids engaged. It’s been awesome because the kids will come back the next week and talk about how they discussed the concepts with their parents to see what they would do in the situation.”

The instructors have been impressed with the students’ ability to grasp the material and their enthusiasm in the classroom. However, some students are skeptical as to how the presented scenarios are relative to every day life.

Ninno says some of the students believe the scenarios will never happen to them, and are therefore irrelevant.

“I told a student, we are currently in a war in Afghanistan. You’re an officer in the army; you’re deciding where to send you’re troops. If you send them to the safe place, no one will die but we won’t gain anything. If you send them to the dangerous place, people may die, but we’ll gain a lot of ground in the war. It’s just like the Trolley problem.”

The class has had an affect on both the teachers and the students. Johnson says the class made her realize philosophy is something she definitely wants to keep learning and possibly make a career out of in the future, while Massoud says the class opened her to the possibility of continuing to teach philosophy to kids, instead of just remaining at the university level.

The Southside Charter School is a public school with students from Kindergarten through eighth grade. It is located at 2200 Onondaga Creek Blvd.