Teen dances his way to Houston

“An old soul,” “ambitious” and “hungry to learn” are all descriptions used to define traits of dancer Tevin Johnson, one of four recent winners of Syracuse’s ACT-SO competition.

Johnson, a 10th-grader at Corcoran High School, will next move on to the national competition being held in Houston July 5 through 9. 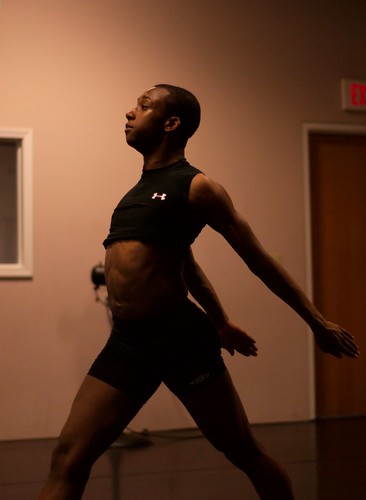 ACT-SO stands for Afro-Academic Cultural, Technological and Scientific Olympics, and it is a program of the National Association for the Advancement of Colored People.

Each piece Johnson choreographs tells a story. His piece for the upcoming ACT-SO competition is performed to “In This Shirt” by The Irrepressibles, which includes the repeating line “I am lost.” Johnson conveys the struggle to find one’s identity through his movements.

“Throughout the entire piece, I’m lost and am continually trying to find myself,” Johnson explained.

“Dance is theater,” added Brandon Ellis, one of Johnson’s teachers and the Artistic Director of The Dance Theater of Syracuse. “Trevin understands the whole concept of storytelling through dance and the need to instill through your performance what it is you want the audience to walk away seeing but also feeling.”

Ellis sees much of himself in Johnson.

“Tevin is eager and does his homework,” Ellis said. “He listens to feedback and applies it; he’s adaptable and very dedicated.” 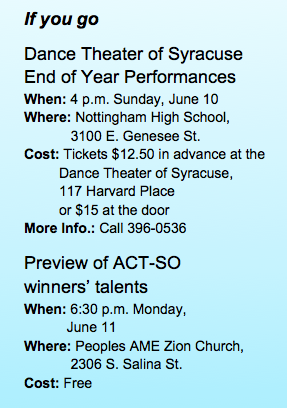 Ellis said he used to rehearse in his living room and spend hours in the library studying great choreographers. And he sees Johnson doing the same.

“He’ll spend hours watching dancers on YouTube because he has that inner passion and hunger to learn as much as he can,” Ellis said.

There are two upcoming opportunities to see Johnson perform: this Sunday and Monday. The Dance Theater of Syracuse students will perform their end of year show at 4 p.m. Sunday at Nottingham High School.

Then Monday, the four students moving on to the ACT-SO’s national competition will hold a showcase. In addition to Johnson, Justin Tanksley, a 10th-grader at Jamesville-DeWitt High School, for vocal/contemporary music; Christian Charles, a senior at Jamesville-DeWitt, for drawing, and Tracee Jennings, a senior at Corcoran, for entrepreneurship, will exhibit their talents at the Peoples AME Zion Church.

In the future, Johnson plans to attend Fordham University and then earn a spot with the Alvin Ailey American Dance Theater, where Ellis studied. He sees himself becoming a triple threat: dancer, actor and singer.

“I want to do it all,” says Johnson with enthusiasm. “I mean why not? You only live once.”

— To contribute or volunteer with ACT-SO, contact Gwendolyn Fagan at 314-6824