Dharma Kids program at Zen Center of Syracuse open to all

Today’s assignment: “Draw what you hear.”

As soon as Reijitsu Paul Batkin says these words, the eyes of the children sitting inside the Zen Center of Syracuse light up. These are the kinds of activities they look forward to on Sundays at the Dharma Kids program. The five children quickly pick up crayons and paper, rushing to a spot inside the center where they can sit quietly, reflect and “draw what they hear.” 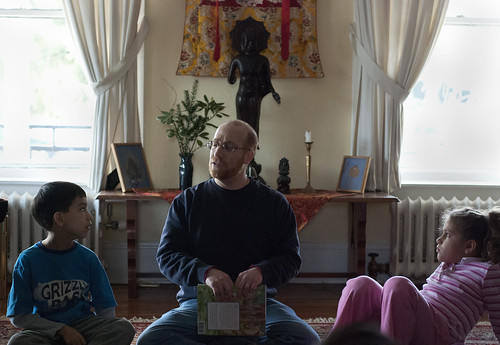 “I decided to track the noise I heard,” says Gene Balian, 7, of Fayetteville, as he holds up a white piece of paper showing red, yellow and blue lines that look almost like a heart monitor. “The spikes up are when I heard something loud, like someone coughing.”

Next to present her findings is Ellen Batkin, Batkin’s daughter. The 6-year-old took a different approach. She shows a paper with splashes of color in different sizes.

“I hear a loud noise, paper shuffling, coloring, trucks from outside, people walking and people whispering,” she excitedly explains. “I showed the different sounds in different colors.”

These creative projects are just one part of the Dharma Kids program at the Zen Center of Syracuse at 266 W. Seneca Turnpike. Recently, the children helped to prepare for a special upcoming event that is a major celebration for Buddhists, according to Batkin’s wife, Lyn Blanchfield.

“We do some fun group activities, like recently we made clay Buddha statues and painted them to celebrate the Buddha’s birthday in April,” she explained.

The Dharma Kids program brings families together at the center so that children can learn more about Buddhist practices and values. The Zen Center is not only a meeting place for those studying various levels of Buddhism, but also a sort of “house of worship,” where people can meditate and partake in Buddhist practices. It is just one of two in the area. 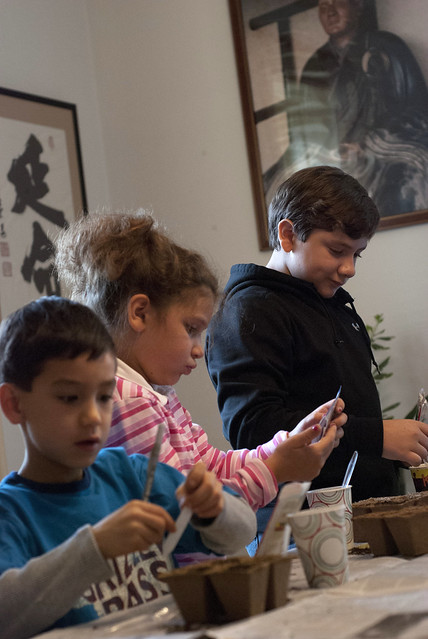 Dharma Kids started around 2000, but stopped for a few years because there was no one to lead it. However, center member Jennifer Waters revitalized it four years ago, and then passed it on to its current director, Paul Batkin. Batkin and his family are from the city of Syracuse.

He leads the group two Sundays each month at10:30 a.m. It is open to children ages 5 and up, as well as their parents. The program is open to all members of the community, not just members of the Zen Center, according to Batkin.

“We have a lot of people coming from communities all around Syracuse because we are the only place that offers a program like this,” Batkin said.

Emily Balian is one of those people, traveling from Fayetteville with her two children Karina, 9, and Gene to take part in the program.

“I started bringing them a year ago when I found out about this Zen program for kids in the area,” she said. “I practice Buddhism in my own home, so it’s great to get a chance to introduce it to the kids.

“When they come here, they can explore it and have some kind of experience with it.”

While the program is well known among Zen Center members and others who “sit,” or participate in meditation and study some form of Buddhism, it has not always been publicized to those in the city of Syracuse. However, the program can benefit local kids even if their families are not Buddhist, according to former participant and Syracuse University Communication and Rhetorical Studies professor Diane Grimes.

“It’s very good for kids because it can calm them down and help them learn how to focus,” she explained. “I’m not sure if you’re just going to practice it for an hour every other week it will stick, but for those who really have it as a part of their lifestyle at home, it works.”

While Dharma Kids is open to everyone, the experience does involve learning about both Tibetan and Zen Buddhism. It also includes a short meditation in the Zendo, or Buddhist Meditation Hall, a reading from the story of Buddha’s life, and some kind of craft or activity.

“Sitting for 45 minutes quietly meditating is great, but it’s a little more than I could ask my 6-year-old to do,” Batkin said. “This is important to me, so it’s a great way to share it with my children.” 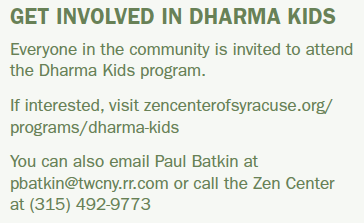 Batkin’s son, Daniel, has attended the program for several years. Soft-spoken and introspective, Daniel proves himself to be an extremely mature and thoughtful 13-year-old. The program really helps children appreciate being in the present moment, he said.

“I think when we go into the Zendo, it’s so quiet and just sitting there really helps us focus on being mindful,” Daniel added.

These types of lessons taught in the Dharma Kids program are not just limited to Buddhist practice, but can apply to all people in all aspects of life, according to Grimes. She took her neighbor’s two children to the program.

“So there is this idea that we are always filling our buckets and be kind to people, and their mom talked about that with them.”

Batkin acknowledges that it is not an immediate process. It takes time for children to really grasp his teachings
“I think it’s more of a slow, evolutionary thing,” Batkin said. “I think that it has affected Daniel, who has been around this practice since he was a baby.” 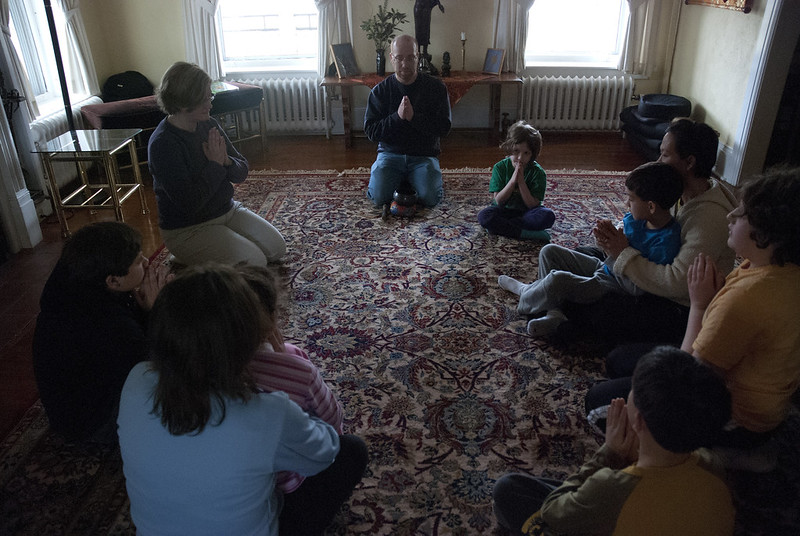