Six adolescents, all student artists at the Community Folk Art Center, at 805 E. Genesee St., circled around Adrianna Cummings, a sophomore at Corcoran High School. As they watched, Cummings pooled bright red paint onto the word “violence” inscribed on a section of what will be a 120-square-foot mural. Once the paint was applied, the group lifted the mural board, allowing the red to flow across the painting like streams of dripping blood. 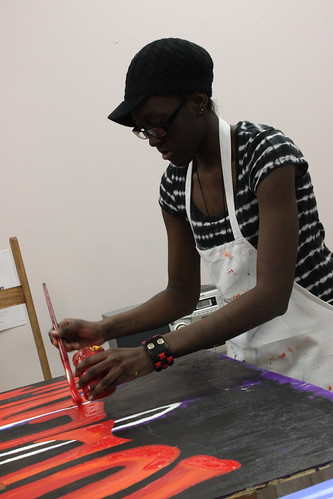 Adrianna Cummings paints a portion of the mural. -- Photo by by Mary Desmond, Staff Photo

“She really worked hard on the ‘violence.’ She brought it home.”

The student artists are members of the center’s Creative Arts Academy — an arts and education program for Syracuse students in grades seven through 12. For almost five months, they have worked under the guidance of a local painter, Arthur Brangman, to create a mural 7 feet high and 17 feet wide that calls for an end to violence in the Syracuse community. With the “blood,” the mural is one step closer to completion.

After a few more steps, the artists finished the mural, which will be displayed on the west side of the Community Folk Art Center for people in Syracuse to see.

The project started in November 2010, when the students met with Ricardo Gouveia, a political artist and muralist who goes by the name Rigo 23.

With Rigo 23’s help, the students developed a concept for the mural. “We talked about violence, how we felt about it, some of us had been dealing with it so much we’d gotten used to it, emotionally detached from it,” Cummings said.

Ever since, they have worked each week to transform the idea into a work of art. The mural has been evolving over time to reflect its makers’ ideas and creativity.

“He gave us an idea, we started with that idea. But then we changed it to fit us a little more,” Cummings said. The mural’s evolution highlights what Brangman says is one of the strongest aspects of the Creative Arts Academy.

“That’s what I like about this program,” Brangman said. “They’re not like puppets. They come to me with new ideas, and we talk it over.” 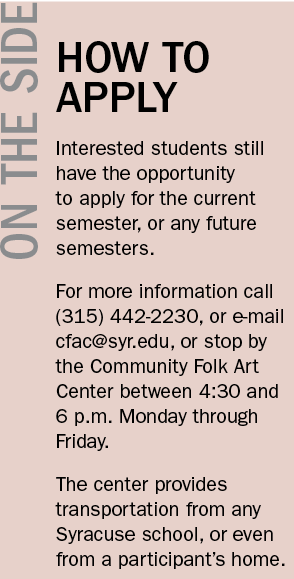 Its aim is to inspire local high school students to engage in their education through programs in the arts. Marshal says the academy wants to give students an outlet to explore their creativity while “defining their futures in terms of college.” Students can choose to follow one of three disciplines: dance, theater or visual arts. Creativity and determination are the main requirements for program applicants.

“We are looking for students who are really heavily devoted to their craft,” Marshal said.

To join the Creative Arts Academy, students must submit a formal application, as well as an example of their work. Aspiring visual artists must submit a portfolio, dancers must audition with a dance, and theater students must perform a monologue or song. The process is implemented to ensure that applicants are truly determined. 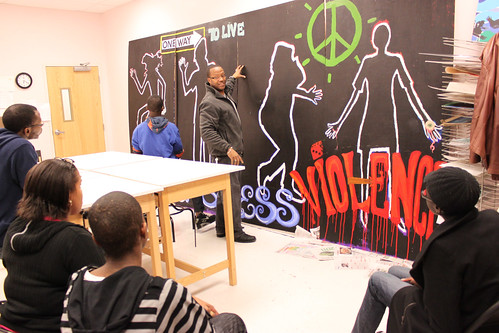 Artists created a mural that is 7 feet high and 17 feet wide and calls for an end to violence. -- Photo by Mary Desmond, Staff Photo

“They don’t get students in here who don’t want to be here,” said Brangman. “It’s kind of neat because they actually like what they’re doing, they audition, they bring in portfolios. It’s just more professional.”

For Cummings, the academy is exactly what she was searching for because she had found that other art workshops were too elementary.

“Every time I’d go look for an art program, it was like little stuff, like making a mask out of paper or Martha Stewart stuff. But I was looking for a serious art program.”

Chaz Griffin, a Fashion Institute of Technology graduate, shadows Brangman’s art classes. Griffin said he hopes to one day teach classes at the Creative Arts Academy. After his first two weeks, Griffin said that of all the things he has seen, he is most impressed by the students themselves.

“Honestly the kids, even though they are teenagers and they’re a little young, at the same time they’re artistic, they’re very intelligent. They’re smarter than I was when I was their age.”
The Creative Arts Academy provides transportation, a snack and academic tutoring for participants. In return, Marshal said students must maintain a good attendance record to the art classes, and above a “C” average in their academic courses.

Today, the program has 13 students, but Marshal says the program is still accepting applications for the current semester.

“A lot of artists can be shy,” he said. “I would encourage them to get over their shyness and be in touch with us.”