At least, that’s how tall the 7- and 8-year-olds were who represented him as part of an Interactive Black History Museum project at the Dunbar Center. Maya Angelou, Jackie Robinson, and Harriet Tubman were also in the crowd.

The students range in age from 5 to 14, and are part of an after-school program at the center. While younger students read quotes by Dr. King, older students presented short speeches in character about a famous African-American of their choice.

“This project brings us back to how things started and why it’s important to celebrate Black History Month,” said Crysten Rushmore, one of the event’s organizers.

The students held a dress rehearsal at the Art Rage gallery, to an audience of teachers and parents. 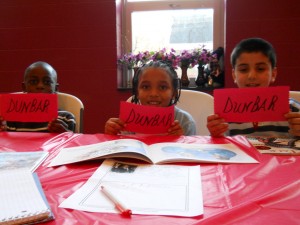 Adalsa Latty is an after-school supervisor for 10- to 14-year-olds. He said the project gave the students the chance to research and reach a greater understanding of African-American leaders not traditionally taught in schools.

Black History Month carries a special meaning with the Dunbar Center. It is one of the few African-American settlement houses still in existence and dedicated to its original goal of serving the community.

Ruthnie Angrand, teen coordinator at the center, says her students were hesitant at first.

“They feel like every day is Black History Day, which makes it challenging to make February significant,” she said.

To change things up, Angrand decided to focus her teen program on the Black Panthers. She said that although the decision was a bit unorthodox, her students could relate to the poetry and hip hop culture of the youth
movements of the 1960s.

The project culminated in a Teen Open Mic Night, where the students performed original raps. “They learned so much! I was so surprised!” Angrand said.