Nearly four years ago, aspiring hip-hop artist Seth Dollar talked about his career goals, hip-hop, and thoughts about high school, in an interview with The Stand. He was 16 then, a student at William Nottingham High School.

“That kid doesn’t exist anymore,” Dollar said with a chuckle. Today he wants to make it in hip-hop more than ever, and has plans to transfer to Syracuse University’s School of Visual and Performing Arts after the fall semester at Onondaga Community College. He’s carving his own path into the hip-hop world now.

Dollar, whose given name is Seth Colton, turned 20 in June and plans to release his newest album, “It’s Only Right,” next year. 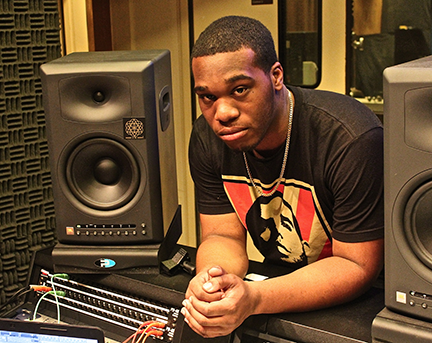 The album will draw from his recent experiences in young adulthood, Dollar said. He’s planning to tell one story over 14 tracks so listeners will need to hear the whole album to fully understand the message.

Dollar began drafting lyrics for “It’s Only Right” in 2011, with plans to finish it for a 2012 release. But he said that summer, when he visited his brother in Miami and played him the entire record, his brother gave it a lukewarm response. “He didn’t appreciate it,” the young rapper said. “The music was good, but the overall message didn’t equate.” So Dollar kept a few elements from that version of the album but largely started over with the project.

Dollar recorded most of the album in the audio suites of Syracuse University’s S.I. Newhouse School of Public Communications. Dollar said he and Traevon Robinson, his friend and sound engineer, like to work in the older of the two Newhouse studios. With the lights dimmed, the two spend weekend evenings over Chinese food and a sound mixing board working on their music. Their two voices are the only ones on the coming-of-age album, Dollar said. 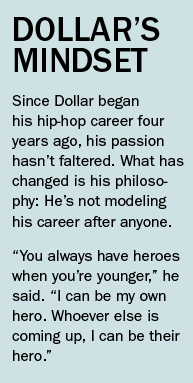 writing program at William Nottingham High School when Dollar was a sophomore.

“He has a strong voice and message,” Haddix said. “That is important.”

Though Haddix acknowledges that she is older than Dollar’s intended audience, she appreciates his passion about his work.

Dollar looks to Haddix as a role model. “You’ve got to keep people with Ph.D.s around,” he said, explaining that Haddix worked hard to achieve her degree. Dollar said at some point, he hopes to be the equivalent in the hip-hop world.

“You get support with them and you can do anything,” Dollar said.

For Dollar, support is everything, though he said it’s been difficult to gain and maintain throughout his young career.

“I feel like our town looks down on Syracuse music,” he said. “We’re already compared to people who are star status. I think that’s kind of ignorant.”

Robinson agreed, saying that friends who grew up together have a hard time looking at their old friends as artists, especially successful ones. Dollar said, “You have to involve the people. It’s almost like the town has to be your wingman before you win over America.” As a part of that, Dollar has expanded his creative reach beyond music.

In 2011, Dollar, Robinson and another friend launched Children of the Summer, a clothing brand name that Dollar said he hopes to build into a broader “lifestyle brand.” Now the brand has merchandise in J. Michael Shoes and will distribute “It’s Only Right” through its website.

J. Michael Manager Erik Hicks said he is often approached with student projects, but only about one in 10 makes it into the store, located at 173 Marshall St. There, he said, some can sell quite well. “I think young people are underestimated for their fresh ideas,” Hicks said.

The young hip-hop artist has also taken an interest in art, going to art galleries and drawing on different types of visual art as inspiration for his own projects. He explained the inspiration for his album’s cover art came from a Steven Spielberg movie and the work of Venezuelan artist Carlos Cruz-Diez, whose work often incorporates color in a way that seems to blur the line between two and three dimensions.

“Nothing is just because,” Dollar said.