When Ginny Donohue responded to her daughter Shanley’s request to help a friend get into college, she could not have predicted that one good deed could affect thousands of young lives — and also cause her to change careers. Donohue, a chief financial officer for a local electronics company at the time, broke away from her corporate life and founded On Point for College, a nonprofit organization dedicated to helping underprivileged students attain a higher education. 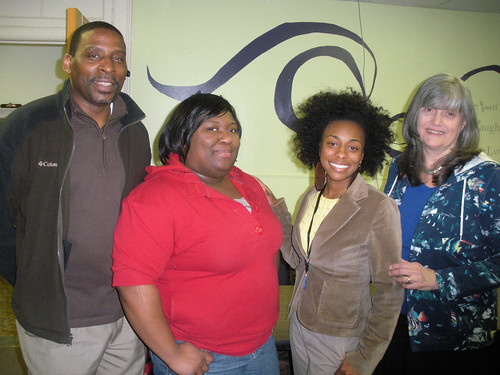 From left, On Point's Director Sam Rowser stands with Sheleia Horton and Caly Givens, former On Point recipients and volunteers, and the organization's found Ginny Donohue. -- Photo by Jason Krakower

“I feel like we live in this land of opportunity, and yet it wasn’t really an equal playing ground,” said Donohue, who was named a 2010 Purpose Prize fellow for contributions to the Syracuse community. “Someone said once that it’s an honor to be able to change the course of somebody’s life, and I just think that we’re in this wonderful position to make their road a little easier.” The Purpose Prize is provided by the Atlantic Philanthropies and the John Templeton Foundation.

Sheleia Horton’s life was changed by On Point, and her success at The College at Brockport State University of New York is an example of the inspiration that the program provides. “Looking at statistics, it shouldn’t be possible,”

“With that struggle, I’m surprised that I completed college, and I’m going back for graduate school. It’s inspired me to help other people the same way that they helped me.”

Though On Point was Donohue’s brainchild, she credits Sam Rowser, the program’s director, with a large share of her organization’s success. Rowser was eager to join On Point when Donohue learned of his experience working with admissions and financial aid for 12 years at Onondaga Community College. Donohue gave him a chance to do what he was doing at OCC for students across the country, he said.

“It’s an overwhelming feeling of happiness after you do something for someone and they’re so appreciative,” Rowser said.

Rowser said that his passion and commitment led him to “the trenches” for years doing outreach work for On Point, especially in the Syracuse community. He and the 13 full-time employees and 160 volunteers have worked with area community centers, boys and girls clubs, the Salvation Army’s Barnabas House at 1912 S. Salina St., and programs such as Say Yes to Education to get the word out and find students for On Point.

“Our goal is to remove barriers that would hinder students from being successful,” Rowser said. “I see education as the great equalizer. If we can help the youth become educated, we give them equal footing to be successful at whatever they want to do.”

The major barriers that Rowser refers to are the application process, transportation, and financial problems. 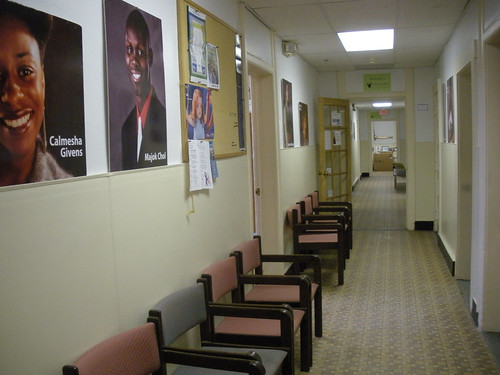 The offices of On Point for College located at 1654 W. Onondaga St., Syracuse. -- Photo by Jason Krakower

It is part of his responsibilities to deal with these issues every day. For example, On Point will guide a student through standard and financial aid applications and help them understand what everything means. If a student has an interview or needs help moving into a dorm but does not have access to a vehicle, On Point will provide transportation.

“Our program is not one where we just help kids get in. We work with them throughout that process,” Rowser said. “We call it application to graduation. We’re not giving up on a member.”

Horton and other students have come back to work for On Point — at least temporarily — partially in gratitude for the help that the program provided. Another student assisting the organization now is Caly Givens, who said she was a former gang member who needed someone’s help to get on track.

“It was necessary that I sign up with a program like On Point for College because I was headed down the wrong path,” said Givens, who went on to the Fashion Institute of Technology and an acting career. “Through their assistance, it created opportunities for me and opened doors. It made me who I am because I still sometimes wonder how I’m in the position that I’m in right now.”