As the research associate professor in the Civil and Environmental Engineering Department of Syracuse University, Peter W. Plumley often asked his freshmen class why they decided to take on an engineering path. In response, he often hears back “because I was in an engineering design competition in sixth grade.”

Those answers became the biggest driving force for Plumley, along with a group of staff members from the L.C. Smith College of Engineering and Computer Science at SU, to start a mini bridge design competition called “Build ’em and Bust ’em” in 1999.

On the morning of Nov. 10 in the Milton J. Rubenstein Museum of Science and Technology, more than 600 students from across Central New York in fourth though 12th grades competed in this year’s competition. Schools from the South Side, including Danforth Magnet Elementary, located at 309 W. Brighton Ave., and Corcoran High School, at 919 Glenwood Ave., were just part of this competition.

“Our hope is that our young people get excited about topics in engineering and hopefully one day they will pursue careers as engineers,” said Diane Darwish, a committee member of Build ’em and Bust ’em. “But our biggest goal is just for them to get out, have some fun and do some engineering-based activities.” 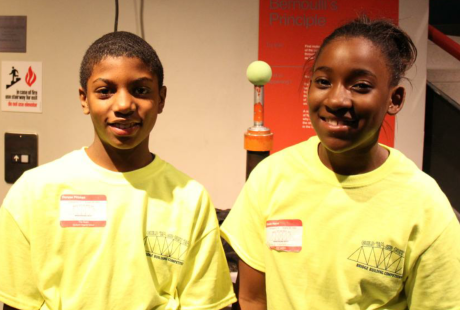 Build ’em and Bust ’em participants are divided into three categories according to their grades and vie for 18 awards including bridge efficiency, Best Bridge Design and Best Team Name.

“I love to build, cooperate and compete,” said Donyae Pittman, a sixth grader of the Danforth Magnet Elementary and a member of the school’s technology club. Pittman said he wanted to become an engineer in the future.

All Build ’em and Bust ’em teams need to bring in their pre-built mini bridge made with lightweight balsa wood. During the competition, every bridge is placed on a platform where increasing force is applied by a square pad until it breaks and reaches its maximum load. The square pad is connected to a computer and the exact peak load can be shown on the computer screen.

According to Kevin Barnett, director of Computer & IT Services at SU and a committee member of the Build ’em and Bust ’em, the winning bridges are decided based on bridge efficiency, that is, the ratio of peak load to the weight of the bridge.

Corcoran High School’s 12th grade student Gabriel Smolnycki, whose bridge bore 1,700 times its weight before it broke, won fourth place for bridge efficiency in the high school category. He said the most challenging part of preparation was designing. 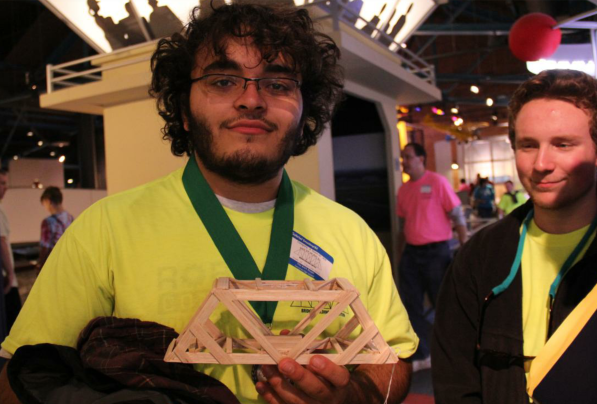 “I built the model of the bridge on my computer, using CAD software” Smolnycki said. “I put in structural property for it, and then you can model how the bridge will react to a certain load, so I did it for multiple designs and chose the one that has the best strength rate ratio, which is the ultimate goal of this competition.”

Students also have to be cautious in the building process because the dimensions of the bridges need to meet certain parameters so as to be properly placed on the deck of the measure machine, according to Jimsak Daoreuang, assistant director of the Le Moyne College Science and Technology Entry Program. Daoreuang mentors STEM programs in several city high schools — including Nottingham High School and Henninger High School — and helped the students prepare for this competition.

“We do a unit on structures, and how structures work by having forces all set in different directions,“ Williams said. “This competition really gives them the best hands-on opportunity to actually work with those concepts, make something, test it and see how those forces work.”