In 1964 a city ordinance that fined persons or businesses not clearing their snow-covered sidewalks was repealed, essentially leaving the police with tools “with no teeth,” said Syracuse police Sgt. Gary Bulinski. 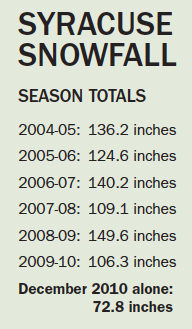 Sidewalk complaints are dealt with by the community-policing unit, whose officers will try to contact people or businesses when snow piles up, Bulinski said. The police can detail the civil liabilities involved if someone is injured in the snow, but no ticket or written citation is given out, said Bulinski, who hopes that citizens will do the right thing.

“It’s a matter of common courtesy for your neighbors and people in your community. It would be beneficial if they cleaned their sidewalks,” Bulinski said. “All the police can do is work with whatever law is on the books.”

The city of Syracuse is evaluating the situation and looking at ways to improve things, said Lindsay McCluskey, press secretary for Mayor Stephanie Miner.

In the meantime, many students on the South Side are forced off the sidewalks and into the streets when they walk to and from school. 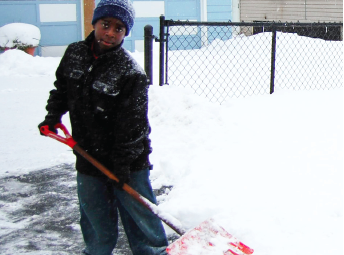 Dennis Rice, 11, once walked five blocks through 8 inches of snow to get to school. -- Fernando Alfonso III, Staff Photo

In the month of December alone, Syracuse received 72.8 inches of snow. This includes a four-day, lake effect snowfall that set a record of 37 inches of snow from Dec. 5–8, said Tom Kines, senior meteorologist at Accuweather.

This is not good news for Dennis Rice, 11, a sixth-grader at Danforth Magnet School who walked five blocks or so through 8 inches of snow to get to school Dec. 4.

“I stomp off and I wait in the auditorium to dry off,” Rice said about how he deals with the snow once he gets to school. “It’s cold.”

Charles Jennings, 15, and Kyseen Robinson, 15, are both students at the Institute for Technology at Syracuse Central. Like Rice, both students must contend with the snow on their journey to and from the bus stop, which is a couple of blocks from home and usually takes about 10 minutes, Jennings said.

The sidewalks are usually so packed with snow it’s easier to walk in the street, said Jennings, who brings an extra pair of socks to school when the weather gets bad.

“The sidewalks are terrible,” Jennings said. “The snow goes in your shoes. It adds about 10 more minutes. I’m wet up to my knees, sometimes.”