Highlight of six sessions: Building of a 14-Foot Geodesic Dome

From building websites to growing food, students from Syracuse University and the city’s high schools are practicing ways to sustain themselves and their communities through a workshop series, which began Saturday, Feb. 8, at 601 Tully.

“We put all these different workshops together that would be kind of a nice balance between more technological skills – we’re going to do web design today and bike repair – to more so-called primitive skills, like gardening or building a structure,” said Susannah Sayler, co-director of the Canary Project.

The Canary Project, an arts organization that works to deepen public awareness about climate change, received a grant from The Rockefeller Foundation to finance the series, which is called Wilder Compound. Six workshops throughout the spring will teach participants skills, such as building a bicycle-powered phone charger to building an earth oven and a greenhouse for the Southwest Community Farm. 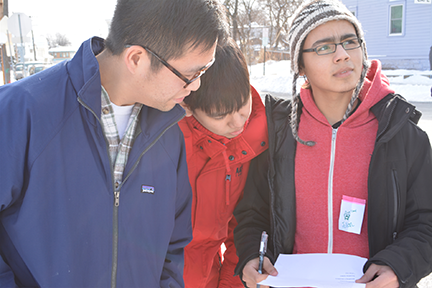 From left, Philip Wong, junior at Syracuse University, Michael Zhang, freshman at SU, and Julian Velandia, 15, sophomore at Nottingham High School, contemplate what makes them proud of Syracuse during a photo scavenger hunt outside of 601 Tully.

Around 20 students attended the first workshop, which began with participants writing their hopes for the program on bright orange, yellow and pink note cards.  Some of these included:  Learning about urban gardens, building communities, becoming a vegetarian and, of course, having fun.

Later in the day, participants went on a photography scavenger hunt and posted their pictures on the group’s blog. They also learned how to navigate Squarespace, a web hosting service. Throughout the series, students will add more content to the website, said Jill Peterson, a design instructor in the series.

“Do we want to add an Instagram gallery over here? What other features would be good?  Eventually, we can put video in really easily,” Peterson explained.

Visitors to the Wilder Compound’s site will also find details about each workshop in the series.  Philip Wong, a junior studying environmental engineering at SU, looks forward to constructing a geodesic dome and gardening.

“You can be more resilient if you grow your own food.  You can cook your own food if you make your own earth oven,” Wong said.

He also expressed excitement about building a bicycle-powered phone charger.  “What if you get a blackout?  You’d just find your bike, charge your phone and call someone to get you out of there,” Wong said.

For some students, the workshops are primarily about having fun. Rashon Isaac, a sophomore at Nottingham High School, is excited about the opportunity to interact with other people.

“All of these people from college are probably going to help me with which college and what major I want to do,” he said.

In April, students will build a 14-foot geodesic dome, which will serve as a greenhouse for the Southwest Community Farm. The structure will extend the urban garden’s growing period, so crops can survive through the winter, said Susannah Sayler, co-director of the Canary Project.

“They [Southwest Community Farm] had a stated need for a greenhouse,” Sayler said. “They had plans to build one and then their funding fell through.”

In addition to contributing to the South Side community, the series seeks to help students become more self-sufficient, Sayler said, and resiliency is a popular topic among environmentalists.

“Particularly after Hurricane Sandy because people found that they couldn’t do the things they needed to do to function, like charge their cell phones or get around,” Sayler said.

That disaster pushed the group to start thinking more about resiliency. “There’s going to be a need for that more and more in the future,” Sayler said, “as we have unstable ecological situations.”

If any college or high school student wants to sign up for a future event in the series, they can by contacting Ethany Uttech at eauttech@gmail.com or (917) 502-8530 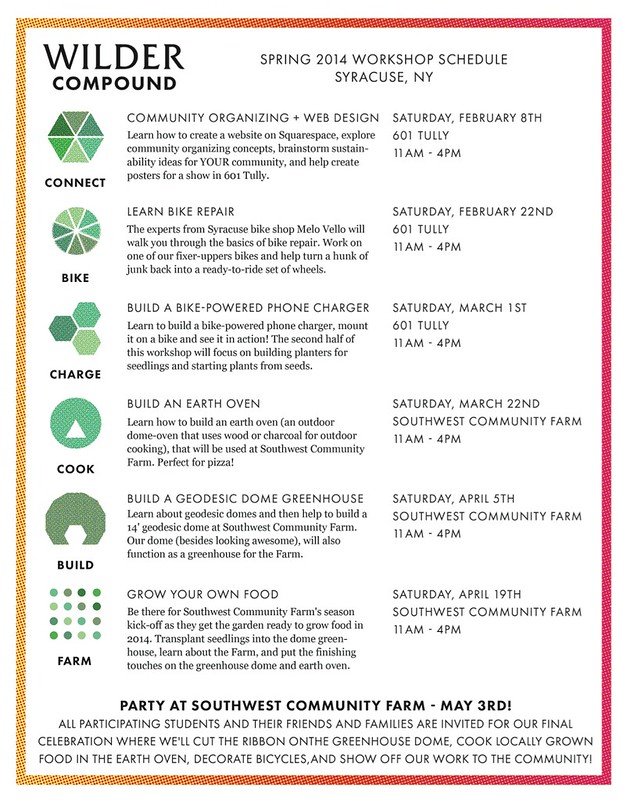