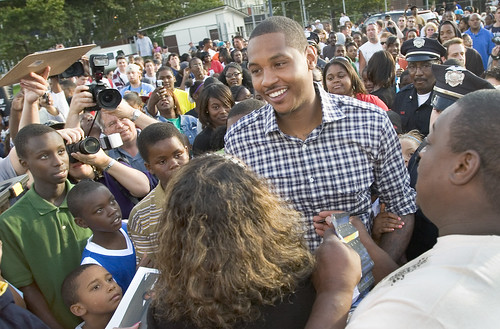 Anthony and Boeheim were on hand to dedicate the courts, located at the corner of McBride and Taylor streets, and also play host to a tournament between teams of Syracuse-area boys and girls.

The courts were renovated as part of the “Courts for Kids” program, a venture between the Carmelo Anthony Foundation, Jim Boeheim Foundation, Time Warner Cable and TV One. Both courts were resurfaced, painted blue and equipped with new hoops. There are plans to renovate more courts throughout the city in the future.

Anthony was only on hand briefly, but he played a vital role in getting the courts renovated and was the main reason many people showed up for the event.

“He’s been very supportive of everything we’ve tried to do here,” Boeheim said. “It shows the kind of character he has.”

Also at the event was Syracuse-native and former Super Bowl champion Dorsey Levens. Although not directly involved in the “Courts for Kids” program, Levens has been in contact with Anthony and Boeheim, and felt that attending the event was important.

The event had added meaning to Levens: he used to pay ball on these courts when he was growing up. Levens has also aided the community through his own foundation. Monday he expressed hope that the courts would provide children in the neighborhood an alternative to the streets.

The event was not just attended by South Side residents. Attendees from all backgrounds and areas of Syracuse showed up to get a glimpse of Anthony and the new courts.

While much of the excitement was reserved for the NBA superstar, the response to the new pristine blue courts was overwhelmingly positive. Chris Graham, 17, and his brother, Corey, 16, were both pleased with how the new courts looked.

“They used to be sloppy, torn up and old, but now they’re perfect,” Chris Graham said.

Levens’ grandmother, Gloria Mims, was just thrilled at the turnout for the event. Seeing people from all over Syracuse come out in support of one another was good for the community, she felt.

“Respect and love are flourishing in people,” she said. “This makes my day.”

Yolanda Brown, a registered nurse, attended the event with her five children and husband. She was glad to see so many people taking an interest in the community, but she wondered why money was not being used to fund other projects.

“We need things that show kids they can reach for more than just a basketball hoop,” Brown said.