On Dec. 8, 1994, the Rolling Stones played at the Carrier Dome as part of their Voodoo Lounge tour. Their opening act was the then hot band Spin Doctors, whose final song was their Top 10 hit “Two Princes,” a catchy tune with the refrain “if you,” which could be summarized as follows: “if you want to call me baby, if you like tell me maybe, if you want to buy me flowers, if you like to talk for hours.”

Although the Doctors, due to their more limited slate of hits couldn’t upend the Stones, at least they had fans leaving the Dome with the word “if” reverberating in their heads.

Twenty years later the word “if” resonated with similar intensity within the walls of the sanctuary of Tucker Missionary Baptist Church at 515 Oakwood Ave., just a stone’s throw away from where the Doctors concert was staged.

“Right now I keep hearing ‘what if’ in my head,’ Heidi Holtz said. “That is powerful.” 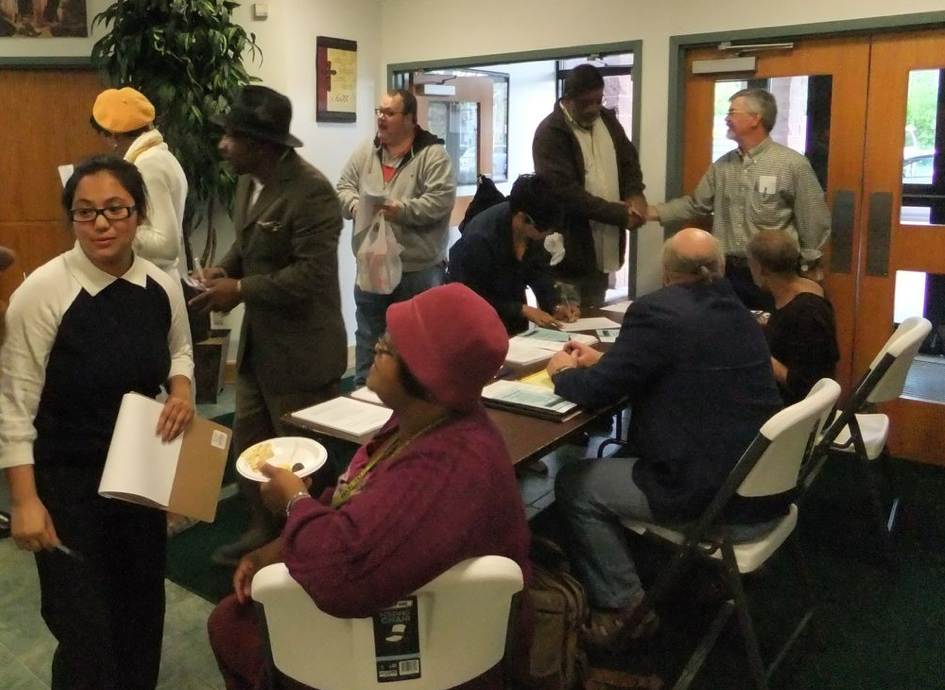 Participants check in before the film screening and discussion. | Photo Provided

On May 19, Holtz, who works at the Rosamond Gifford Foundation, helped coordinate a free and open community discussion that centered in answering a different set of four big “ifs”: “If development companies are building in our neighborhood, what would it take for them to hire local residents?, if local organizations would like to speak for the residents, what should they do?, if local youths organized themselves, what would occur in Syracuse?, and if residents learned the point of view of the developers, how would it help the residents?”

Reggie Siegler, an activist with the Urban Jobs Task Force, took to the podium to frame the discussion. He advocated for a community benefits agreement (CBA) for a $350 million project in the Syracuse Inner Harbor that has been awarded by the city to COR Development Co.

“The community needs to get leverage to talk to the developer,” Siegler told a crowd of close to a 100 people gathered at the church. “Since the developer is receiving public money, we need to talk to the politicians. If we are all together, if we are a cohesive community, we would get jobs for workers in our neighborhoods.” 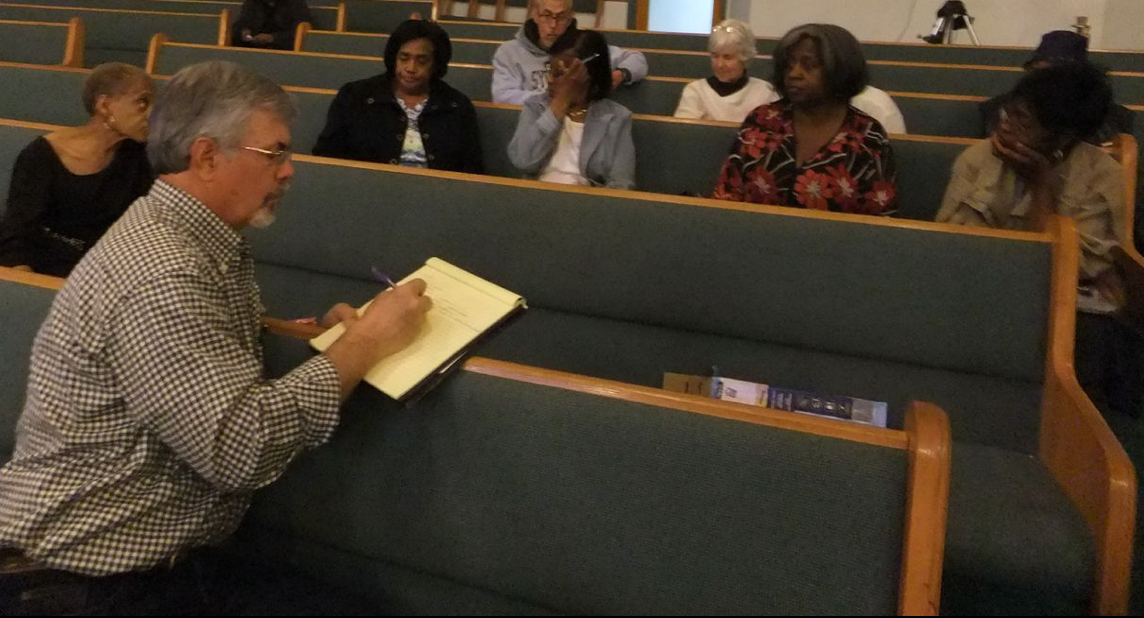 One of the four breakaway groups brainstroms. | Photo Provided

Barry Lentz, also a member of the Urban Jobs Task Force, said that currently there is a lack of trust between the developer and the local community. “In order to surmount the problems, community leaders need to seek mediators who can act as trust brokers, not only with the developer but also with the union so as to work with them.”

Lentz went on to say that there would a greater chance of success of getting jobs for the community if it took action before a request for tender (RFT) is put out by the city government, not after as in the case of the Inner Harbor development.

“We need to start a CBA dialogue before RFTs are out for school district projects and the I-81 highway viaduct replacement in Syracuse,” he added.

Speaking at the plenary session, Lentz was synthesizing the conclusions of one of the four breakaway groups that were assembled to brainstorm the four big “ifs.” 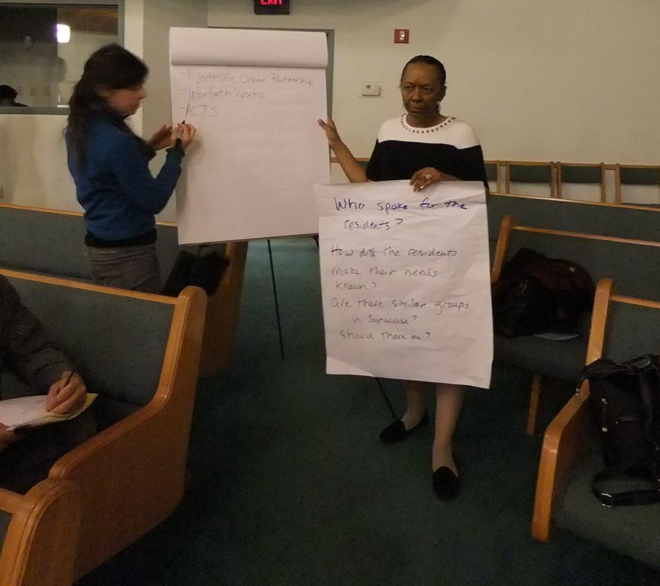 Irwin’s group reflected on the role of the youth in a 58-minute inspirational film screened prior to the discussion: “Gaining Ground: Building Community on Dudley Street” by director Llewellyn Smith.

Two parishioners of Tucker Missionary Baptist Church, Angie Griffin and Virginia Glover, participated in the lively conversation that took place in this group.

Both agreed that the youth depicted in the documentary set a model that could be successfully replicated on the South Side.

“The youngsters were very unselfish and they thought about everybody,” Griffin said, whereas Glover added, “The teenagers were very concerned and took responsibility to empower themselves to get educated to get jobs.”