In the quiet upper auditorium of Beauchamp Branch Library, a little more than a dozen neighbors and a criminal justice class from Onondaga Community College gathered Tuesday, March 26, for an intimate and sensitive dialogue sharing their ties to what has become a common American experience: prison stories.

Calmesha Givens, Syracuse native, and Shannon Fernandez, a Syracuse University student from Brooklyn, NY, shared their childhood, upbringing and personal turning points as their relationships with their parents were reshaped by incarceration. 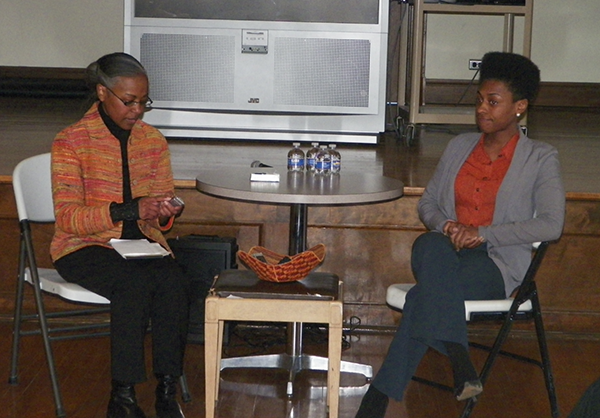 “I love my father, but him being [in prison] doesn’t shape who I am,” said Fernandez, who is majoring in management.

Fernandez’ story began at 6 years old when her West Indian family immigrated to the United States and her father was incarcerated and sentenced to over 50 years on what seemed to be possession charges.

Propelling her curiosity, Fernandez learned as much as she could about the legal process and the events around his arrest but later found that understanding her identity separate from her family dynamics took precedence.

“I have accepted who he is and how long he’s there. I mean who wants to tell your child that they’d be 50 years old when you leave prison?” she said.

Developing a relationship with a father through bars, though difficult, taught both Fernandez and Givens to understand and respect their parents as people.

“I think my parents didn’t know how to support me,” said Givens, whose mother and father were incarcerated within six months of one another. “You can’t fault a person for not knowing.”

Givens, who shared stories of wearing her mother’s shoes and accessories and being her father’s princess, credits her grandparents for taking her to constantly visit her parents and teaching her resilience.

“I remember [my grandmother] saying that if I keep acting like I don’t want to leave [the prison], she won’t bring me back for visits. So I had to cut that out,” Givens shared.

As a pre-teen, Givens eventually developed a clique of her own to engage in fighting and defending herself and friends on the South Side. Once released, her father was interested in seeing a different life for his daughter who grew up in the constant presence of surveillance and seeing uncles and family members put away. She credits On Point for College and her college experience for turning not only her life but her ambition around.

“College was like the best thing ever,” Givens said. “I started all over again.” 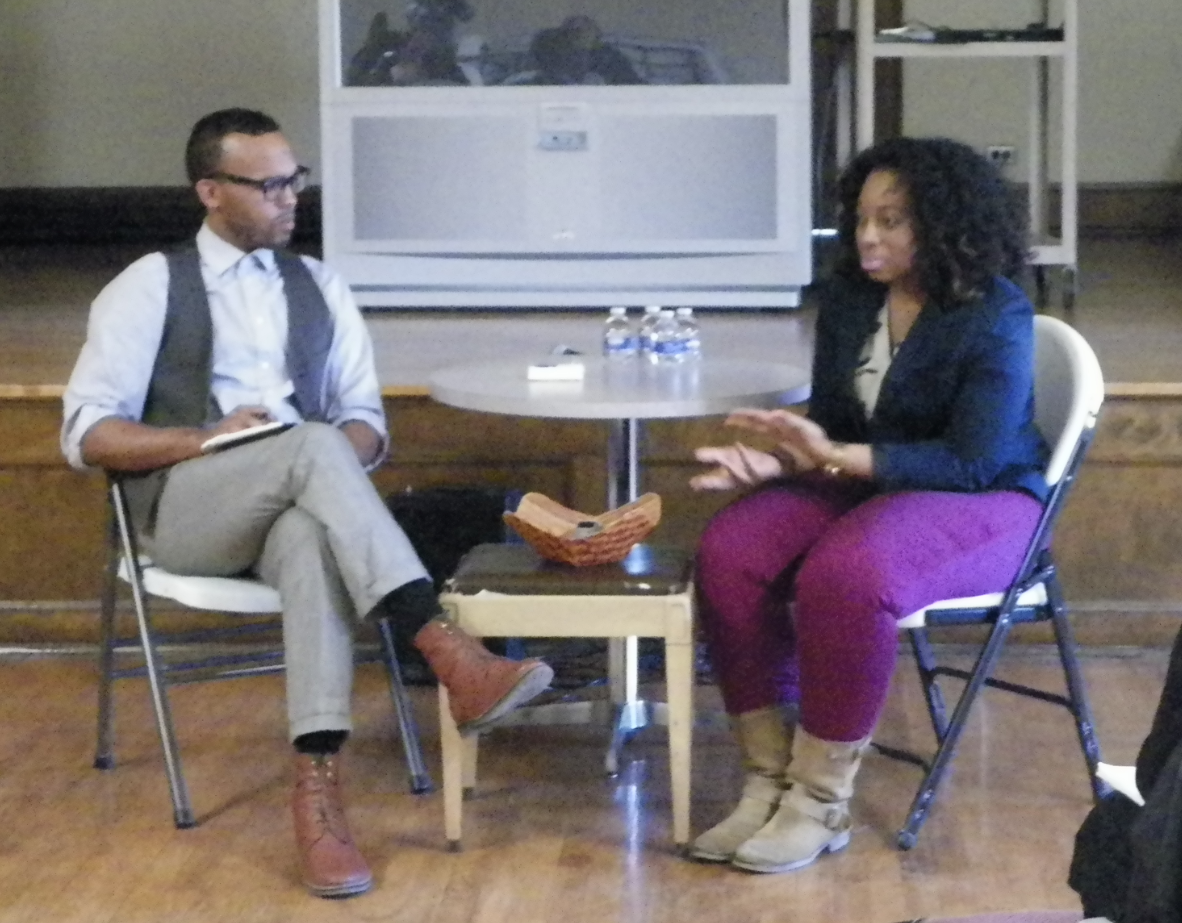 “By college, I just wanted to distance myself from that life,” said Fernandez, whose first visitation experience included ridiculing from guards and an onslaught of rules she wasn’t prepared to understand.

“But I’m still defensive,” said Givens in response to how she feels when remarks or television dramas portray inmates in entirely negative light. “Everything has a bias. The media will portray that, but it’s not ‘truth,’” she said in theme with the purpose of the “Prison Stories” project, which is to share and document communities’ stories, not judge them.

The Reason for Prison Stories

Moderated by the event coordinator and Black Syracuse Project’s Joan Bryant and Johnson-Travis, “Prison Stories” is part of a series of the “Your Story” initiative that aims to explore and document residents’ oral history. The initiative is also produced with Imagining America, La Casita Cultural Center and is housed in the Department of African American Studies.

Prison stories, in particular, drew not only stories of two youth whose parents had been incarcerated but a legally blind teacher who struggles to see her incarcerated husband out of state and a youth counselor who spoke on the hurt of seeing “beautiful kids and good people make foolish mistakes.”

After Mia Bullock, teacher and wife, spoke about the struggles and discrimination she has faced for having an interracial marriage and family, the consensus of the room began to understand that her incarceration story, though not entirely because her husband was black, bore a lot of currently trending symptoms of profiling.

According to a recent article on thinkprogress.org, black men between age 20 and 34 with no high school diploma, for example, are more likely to end up in jail than to have a job, according to a 2010 Pew Charitable Trust study.

Eva Carafa, former prosecutor and criminal justice teacher at Onondaga Community College, agreed that the prison system has become profitable and devolves inexpensive labor to developers and corporations. She also shared that variances in sentences are subject to federal guidelines as opposed to being on a case-by-case basis, so fairness becomes a difficult feat to attain. 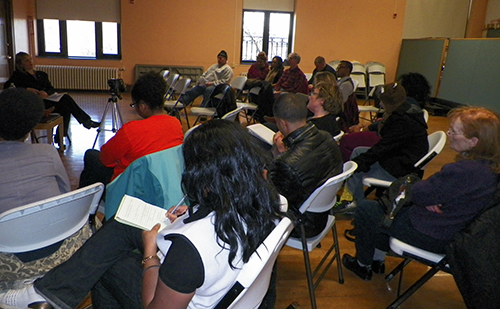 The Prison Stories discussion was held Tuesday, March 26, at Beauchamp Branch Library. The next two Your Story events are scheduled for April 3 and 9.

“I wanted my class to think about how people are affected by these systems,” she said, emphasizing the evening’s focus on the people left to navigate their relationships against social stigma of incarcerated persons.

Though African-Americans make up a significant demographic of inmates, the women who shared their stories hold strongly to the notion that prison is not synonymous with “minorities,” “being doomed” or “people who are bad.”

Elizabeth, one of Carafa’s students, made the switch from culinary arts to criminal justice for that very reason: to help families of criminals because they are often looked down upon.

As groups mingled afterward sharing their prison stories with one another, some exchanged information regarding how to help others navigate complex rules, seek resources and find support. 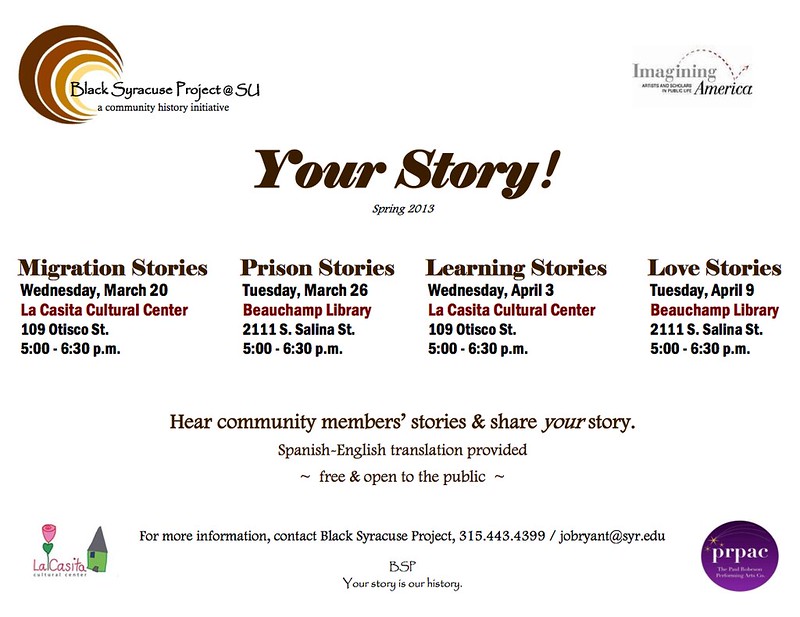