“Teaching at its best is very much like a romance, which reaches the heights it should reach only when both sides do their part,” Thomas, a philosophy professor, said, “No one person can make a romance, and unrequited love is a deep source of pain.”

If teaching a semester-long class is analogous to romance, then presenting to the public for just a few minutes might be analogous to speed dating, which is a formal dating structure in which males and females generally have only eight or so minutes to captivate each other.

The time constraints imposed on the students forced them to be laser-focused as they had to condense and distill a semester-long amount of laborious investigation in a handful of minutes.

The event, titled Underground Research Conference, was put together by professors Joan Bryant and Patricia Roylance, who are colleagues of professor Laurence Thomas at Syracuse University.

Two of the main topics covered by the annual conference, which took place in the Graham Scholarly Commons, were religion in African-American history and the tension between slavery and abolition. 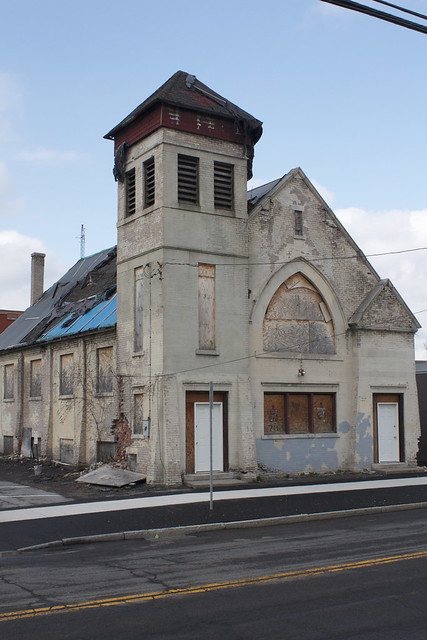 The original site of the People's A.M.E. Zion Church was at 711 E. Fayette St.

A distinctive feature of the event was that the students were required to use sample documents held at SU’s Special Collections Research Center (SCRC) as the foundation for their presentations, which demonstrated that the center can be considered a treasure trove for those seeking to learn more about slavery and abolition. Further, unlike the Onondaga

Historical Association, the SCRC doesn’t charge a fee for accessing its collection.

One of the presenters was Nathan Woods, from Washington, D.C., who has volunteered at the Southwest Community Center on Syracuse’s South Side. His theme was the “Prince of the Underground Railroad,” the Rev. Jermain Loguen (1813-1872), who was a bishop of the African Methodist Episcopal Zion Church. The current place of worship of this denomination is located at 2306 S. Salina St., also on the South Side, where it advertises itself as “the church where God’s people are our priority.”

“Who Jermain Loguen was and how his experiences shaped his life was my starter question,” Woods told the audience. He added that he based his project on Loguen’s autobiography, titled “The Rev. J.W. Loguen, as a Slave and as a Freeman,” published in Syracuse in 1859.

Woods said that Loguen in 1834 stole his slave master’s horse, named Rock, and escaped from Tennessee to Canada. Seven years later Loguen came back to Syracuse, where he bought a house and, as agent  for the Syracuse Fugitive Aid Society, turned it into a busy depot on the Underground Railroad. He is credited for having helped approximately 1,500 freedom seekers. 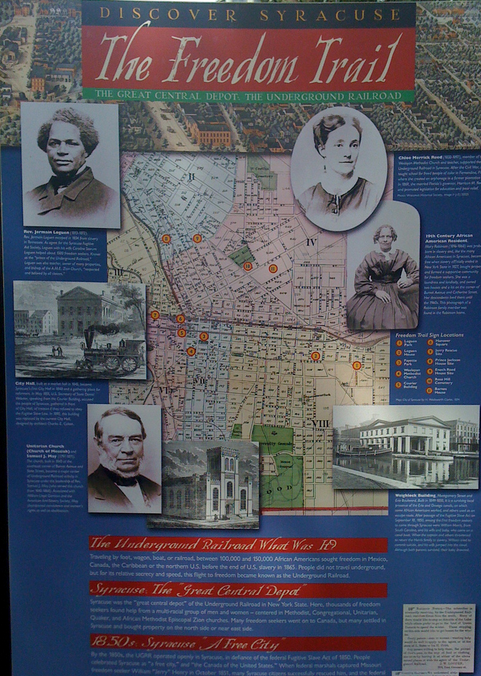 Syracuse’s Freedom Trail is Boston’s Freedom Trail’s poor cousin in terms of the amount of the attention the trails have received from their respective governmental  authorities. For instance, Boston’s is a prime tourist destination and has a red path connecting its 16 historic sites. Even in Syracuse few people have heard about its trail. Also, the 11 sites listed as being part of the trail are disconnected.

This neglect of Syracuse’s trail contributes to a lack of consciousness of Syracuse’s abolitionist history. “Coming from D.C.’s inner city, I didn’t any idea of the rich role that Syracuse played in the struggle against slavery,” Woods said. “It took me a visit to the Special Collections Center to become aware of this role.”