Pastor Jonathan Stephens
Pastor Stephens has been the pastor at Fountain of Life Church at 700 South Ave. for 23 years. He operated his own private security company, the Stephens Security Task Force, for 15 years. He is head of security for western New York’s First Ecclesiastic Jurisdiction, the equivalent of a county within the nondenominational church system. 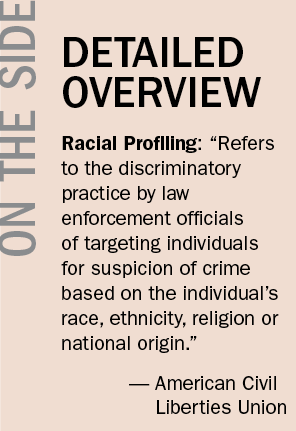 A: “You know, racial profiling is not as overt as it was. It’s more of a tendency and a problem that lies with guys (officers) that have been raised up outside of Syracuse, particularly white gentlemen. The only thing they know about the inner city is what they hear on the news. They come here with the attitude like ‘I’m going to change that.’ The white guy doesn’t know anything about the city except what he hears, so really, he actually thinks he’s contributing to the betterment of the neighborhood. We call it being ‘badge-heavy.’ ”

(Stephens encourages youth who have committed crimes to turn themselves in to him if they have a warrant out for their arrest.)

“While the youth don’t trust the police, one thing black people trust is their pastor. I make sure that if a person turns themselves in to me, that he’s allowed to get arrested but with some dignity, and that’s why the kids want to turn themselves in to me.”

Pastor Burnell Reid
Pastor Reid has been the pastor at Refuge Tabernacle for 16 years. He grew up in various places around Erie, Pa., and Niagara Falls. He has lived on Syracuse’s South Side for 45 years.

A: “Racial profiling? There’s no way to say no or yes. When you talk to someone my age, 63, with what we’ve seen, I would say no, but I come through a period when schools were segregated, actual racism. Today it’s not so drastic, but if you talk to my children, they would say yes, racial profiling exists.”

Q: What would make your kids say that racial profiling exists?

A: “We see a lot of officers being ‘badge-heavy,’ meaning that these police officers come into the community not knowing anything about the inner city except what they see on TV and think that they’re going to change things. That’s one of the problems, but the kids here also need to realize that police officers are human, too. They’re scared also. They have the mentality of going forth and doing what they have to do, but they want to go home in the end also. Every time they make a stop they put their life in jeopardy and have to protect themselves.”

A community activist and director of the Mary Nelson Youth Center, Nelson has been spearheading the recent community grassroots movement to “Stop the Violence” in Syracuse.

Q: What do you think of the police? Do you think that racial profiling still exists?

A: “I never had a problem with the police. With so much going on in our community, I want them doing roadblocks and taking whatever measure necessary. If you’re doing the right thing, you don’t have anything to worry about. I absolutely do not believe that racial profiling exists. We need to throw our support behind the police department to try and put a stop to this violence.”

Dixie is the executive director of Jubilee Homes, leader of the local chapter of the National Action Network, and lifetime local activist. He is a native of Syracuse.

Q: Does racial profiling exist in the community?

A: “If you ask the community, they perceive that racial profiling does exist. It happens where fights and crime break out, and it’s not just Syracuse. I’ve talked to the National Action Network in New York City and they say the same thing. Stopping people based on a profile is a tool the police use for prevention, but at the end of the day it makes it kind of hard to live in an urban setting, where there are more black people versus like the Irish neighborhood, where there hasn’t been a spike in crime. But I think there is a bigger question now: crimes and shootings. There are too many guns on the street, too many young people not working … so really it cuts both ways.”

A: “Well, I think it would be different with a different chief, but Fowler, he’s a person of color. He knows the community and has a lot of goodwill. People are willing to trust him. You have to have a good chief with the determination to get to the point of having conversations between the residents and the police, because today, officers do cross the line at times.”

Q: What can be done about the rise in crime over the past year?

A: “The most important point is giving young men and women a way to be constructive in what they can do. At the end of the day from all sides of town, one thing is not going to stop the violence, but it’s about building kids’ character and giving them a sense of purpose if they’re treated the right way. I think it would be great if kids can prevent crime themselves. We need to give them the leadership and support they need.”