Pedal to Possibilities offers bikes, bonding and beverages for the homeless

It’s barely dawn on a Monday morning, and Andrew Lunetta is already up and working. The senior peace and global studies major at Le Moyne College is busy fine-tuning a bicycle for one of his riders. It’s all part of a routine he follows every Monday, Wednesday and Friday.

“I grew up in Boston, and my mom and dad really influenced me to get involved,” he said. “They are very community driven. When I came here for school, it was something I wanted to replicate.” 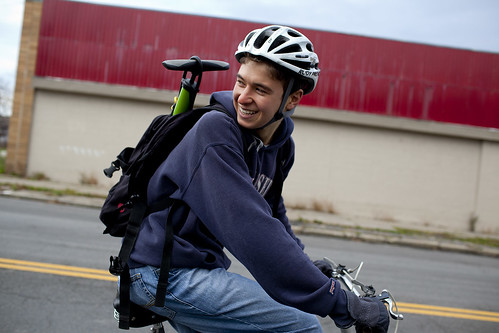 Andrew Lunetta is the founder of Peddle to Possibilities. The first thing on Lunetta's mind is always safety. He relies on his fellow riders to wear a helmet, use proper turning signals and always warn other riders of cars and potholes. -- Photo by Peter Caty

Lunetta said his need to serve led him to The Samaritan Center, a soup kitchen, and later the Oxford Street Inn, a homeless shelter for men, both in Syracuse.

“From there, it kind of snowballed into this,” Lunetta said, gesturing at the bikes lining the Brady Faith Center on South Avenue.

Last March, Lunetta was searching for an activity to offer homeless and underprivileged people in Syracuse.
“Food, clothing and shelter were readily available but what was lacking was a healthy activity,” he said.

So in January, Lunetta began welcoming people into the Brady Faith Center for coffee three days a week. Once the weather warmed up, he began to think about alternative activities to offer the group and came up with Pedal to Possibilities, a program that gives people donated bicycles for participating in group rides.

The program, which provides riders the opportunity to bike three days a week, also offers incentives to keep them coming. “Once a rider completes 10 rides, they get to pick out a bike, and we give them a lock and a helmet,” Lunetta said. 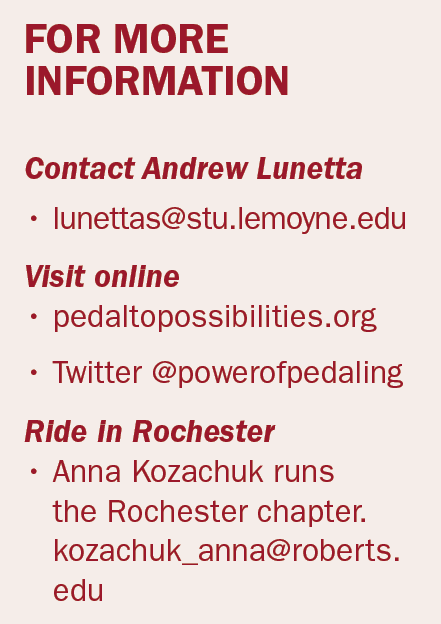 The group ranges from 12 to 15 riders who begin at 9 a.m., and Lunetta said many continue to come even after they’ve earned a bike.

Once winter comes, the program will retire until spring. Some riders expressed their disappointment after hearing that the season was nearing its end.

“I keep hearing depressing news that you’re going to stop riding in November,” one biker said as he walked into the Brady Faith Center on a Monday last month. Lunetta confirmed that Nov. 30 would be the last ride of the season, but he promises to continue to open up for coffee and conversation in the winter months.

Lunetta devotes a lot of time to Pedal to Possibilities. 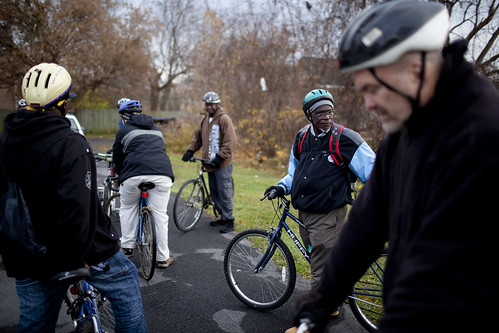 Riders at Peddle to Possibilities prepare to ride on the morning of Nov. 16, 2011. Lunetta requires all of the riders to wear helmets and ensures that all the bikes are in proper working order prior to the rides. -- Photo by Peter Caty

“I started drinking coffee — that’s how I balance it,” he said. “It’s working out because this is something that I love and am passionate about, and I think that’s how I can do it.”

He also says much of his support comes from the Brady Faith Center Executive Director Kevin Frank.

“They do incredible work and have been extremely accommodating, and the program is successful because of the support from them,” Lunetta said.

Frank was happy to offer the venue to Lunetta.

“Andrew is such a ray of light and just so refreshing and life giving,” Frank said. “He brings wonderful energy and spirit to the people and the program, and the riders are positive, engaged and look forward to taking a ride because of it.”

The program that began less than a year ago has grown into a regular healthy activity for many on the South Side, and Lunetta couldn’t be happier with the way the program has evolved. “When it started it was all about the rides, but they have become secondary to the people,” Lunetta said.

“A human connection is something that cannot be overlooked, and getting the chance to chat with so many neat people is really what it’s all about.” 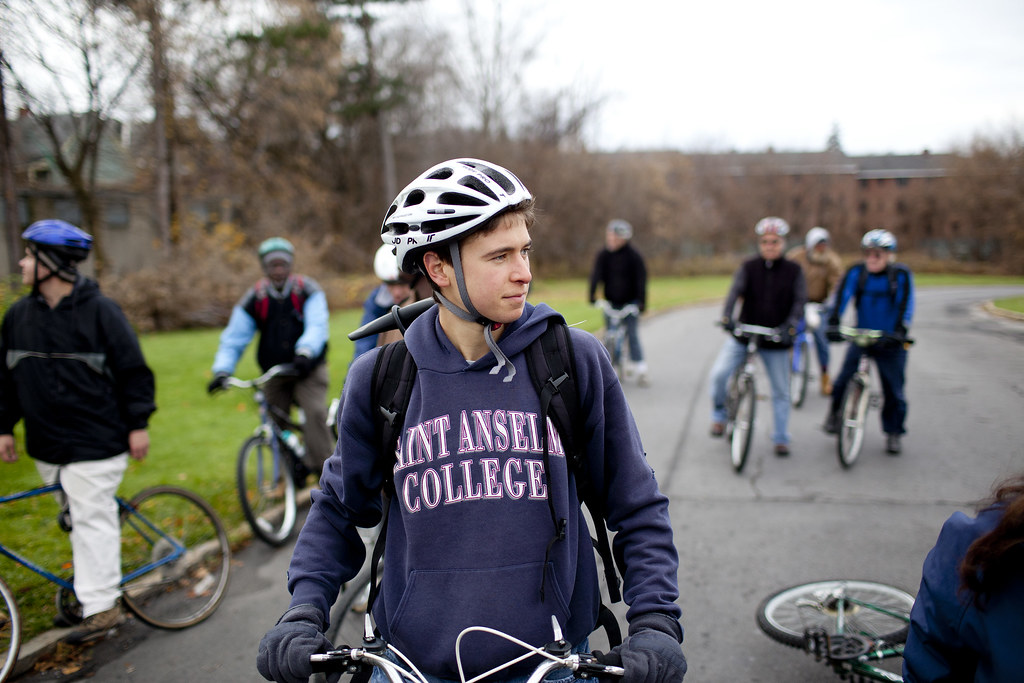 Andrew Lunetta, the founder of Peddle to Possibilities, pauses at a red light with the rest of his riders. -- Photo by Peter Caty, The Stand staff photo