Sitting at his desk in the South Side Innovation Center, Vincent B. Love, 59, describes how he isn’t perfect.

The Syracuse native — who grew up just down the street in Pioneer Homes — points out that he made some wrong decisions in his earlier years. However, one of his goals in life is to do right by giving back to the very community that helped bring him up.

Re-elected for another two years this past January as president of the 100 Black Men of Syracuse chapter, his third term in a row, Love is continuing his platform of leadership and mentoring. He says he wants to help foster respectable, achieving and successful young men through his personal experiences.

Love grew up on the South Side, moved to the West Coast after college and eventually settled back in Syracuse to take care of his mother. He sees himself as a catalyst for the youth of Syracuse to prosper and thrive by having mentors. 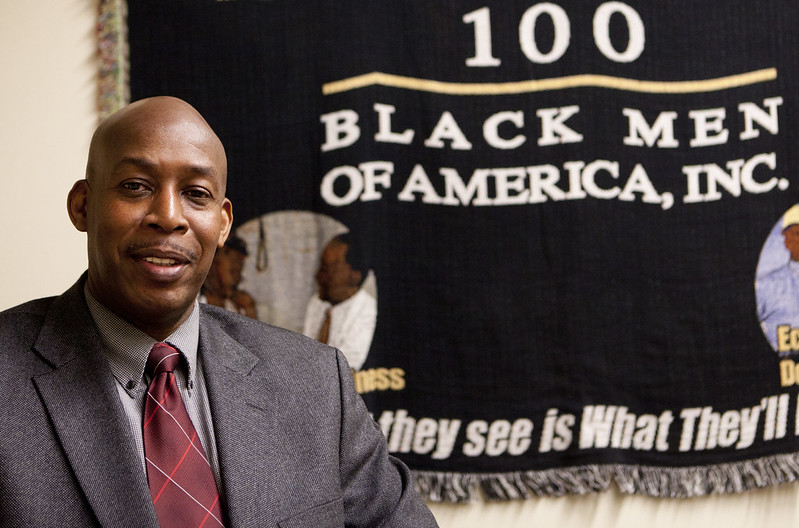 Vincent B. Love, president of 100 Black Men of Syracuse, an organization that aims to connect youth with adult mentors, poses in his office on the South Side of Syracuse. | Allison Milligan, Staff Photo

“When I was young, I had older gentlemen as role models,” Love said. “They weren’t always the most model citizens, but they were there.”

He was brought up by a single mother and a supportive family system that included four brothers and two sisters. He received a full, four-year scholarship to Florida A&M and earned a degree in accounting with a minor in business administration. Love moved to San Francisco after his older sister, whom he credits as one of his most influential mentors, convinced him that the job market was a good match for candidates like him. He eventually ended up in Los Angeles during the early 1980s. Love recalls that while he made some questionable decisions during his time on the West Coast, he saw the experience as a building block to chart the right course in life.

“It was a huge culture shock,” Love said about his time in Los Angeles. “It was a rocky road with some poor lifestyle choices.”

He credits a strong family support system as the foundation he needed to get back on track and realize that a move back to Syracuse, to care for his ailing mother, would be the best decision he could make.

Now Love, who is an accountant and deputy treasurer for the North Syracuse Central School District, makes it his mission — in line with that of 100 Black Men — to devote his time and resources outside of work to “improve the quality of life within the Syracuse community to help young men progress.”

100 Black Men of Syracuse, a local chapter of the national organization 100 Black Men of America, was officially inducted in June 2009. Even though there previously had been two unsuccessful attempts to get a chapter started in Syracuse, Love knew this time would be different: More than 30 men attended the initial meetings, purely by word of mouth.

“Whether he realizes it or not, he’s a born leader,” said Drake Harrison, director at large for the organization. Harrison notes that Love has really come into his own in the position — skillfully able to strike a balance between motivating the members to give as much as they can, yet always ensuring that the members themselves feel valued. Harrison, who is director for the Collegial Science Technology Entry Program at Onondaga Community College, is familiar with overseeing others. Love, he says, knows how to lead by example.

“Vincent will always receive your call or return it,” he said. “He’s willing to listen.”

The national organization is devoted to helping young men pave a successful future through “respect for family, spirituality, justice and integrity,” according to the group’s website. 100 Black Men of Syracuse builds upon those virtues, Love says, but adds four components: mentoring, education, economic empowerment and
health/wellness.

Some of 100 Black Men’s mentoring efforts include, at minimum, weekly visits to Westside Academy at Blodgett, Fowler High School and Percy Hughes Elementary School Bookman Program. Members make sure to engage in activities such as reading to students, checking up with teachers and helping with homework.

“Youth are the basis for the future,” said James McCampbell, vice president of administration with 100 Black Men of Syracuse. “However, I think that the kind of foundation needed so that there is a brighter future for our youth is people stepping up and committing time and effort to make sure that those things are in place that will help foster and enhance that future.”

McCampbell, like many of the other men, had strong role models around him as a young man and believes that continuing that model is crucial in helping shape a more engaged and giving community.

Love wants to make sure that these young people don’t simply see him and other members as older men criticizing or trying to change them. In fact, he says, it’s quite the opposite.

“We want them to know that their current situation, whatever that may be, does not have to dictate their future,” Love said. “We want to give our young people some hope.” That idea of hope as a gateway for a more promising tomorrow is a common mission among the 100 Black Men of Syracuse members.

“A lot of us had similar backgrounds as these youth, so we can share the challenges, give them direction and hope,” said Robert Sykes, a manager of resource planning at National Grid and the vice president of operations with 100 Black Men of Syracuse. “A lot of us have been blessed, so now we have the opportunity to share those blessings.” Sykes helps ensure the organization operates smoothly through tasks like taking minutes, running meetings in Love’s absence, helping to mentor at schools and coordinating youth activities.

Those activities include taking the young men to basketball games at Syracuse University, bowling and picnics. 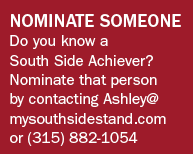 “We want to set the right example of doing the right thing, making the right decision, creating the framework to be successful,” Sykes said about why they put in so much time and effort. “When you make the difference in the lives of young people, you can’t help but feel good about it.”

And in Love’s third term, the work and goals to be achieved are still in motion, he says. He and the other members are always working to achieve such things as higher recruitment of volunteers, partnerships and perhaps — most important — funding. The main source of economic support comes from the annual December banquet. Regardless, Love is determined to continue the work, no matter the time.

“I want my life to be worth something,” he said. “100 Black Men of Syracuse is what makes my life worthwhile.”