Singing Her Way to Fame

The first time Tonaisa Hurt stood up to sing a solo in front of her church congregation, it was because her mother had slipped her $20 to do so. But her anxiety at performing in public fell by the wayside. Tonaisa has been singing and dancing nearly every day of the week since she was a child. And lately, she’s started writing avidly.

As a 14-year-old freshman at Syracuse Academy of Science Charter School on the West Side, Tonaisa is what some could call hyper-involved in the arts. She sings with three choirs at her South Side church, Bellegrove Missionary Baptist Church, 219 W. Castle St., and dances in the Dance Ministry. Tonaisa also was recently cast as a lead in her school’s rendition of “Daddy’s Girl,” a comedic play set in a diner. 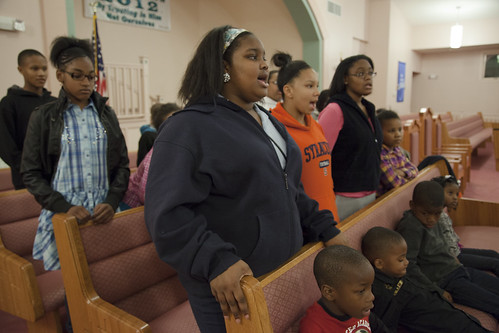 Tonaisa’s busy schedule keeps her going from one rehearsal to the next.

Tonaisa said she has been singing ever since she can remember and that it is “a natural gift.” But Tonaisa’s most recent hobby is creative writing. It is her favorite class in school, and she says she loves the “freedom” in creative writing.

“You don’t have to think about others,” she said. “It’s just how you feel.”

She credits her parents for her love of performance. She said that every week, they would take her to church, where she first started performing.

Her mother, Rosalyn Hurt, recalls those days. “My family used to tell me, ‘That little girl can sing,’” she said.

After Tonaisa’s first few solos, she started to stand on her own, Rosalyn Hurt said. “Just about everything she does, she does well.”

Both of her parents say they try to live their lives as examples for Tonaisa, her older sister Jah-ni and younger sister Charity.

Tonaisa’s father, Jesse Hurt, is a deacon at Bellegrove and considers himself a community activist. He founded Operation H.O.P.E., which stands for Helping Other People Excel, an organization providing residents on Hope Avenue — where the family lives — with everything from food around the holidays to home and garden supplies to improve their property.

“Some of the things you see out here are not good things,” Jesse Hurt said, pointing to Hope Avenue. “But we have to teach them to love all people and to not become a product of your environment.” 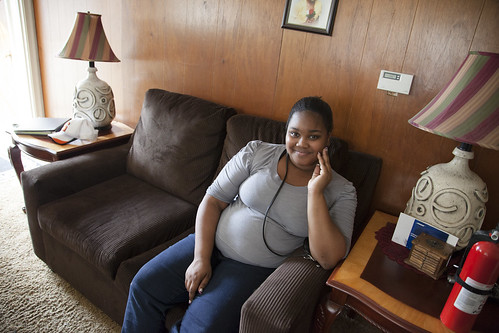 Jesse Hurt said that the area they live in is not the best, but he thinks his family is blessed to be where they are. “I love the South Side. I haven’t been anywhere, in the 30 years I’ve lived here, but on the South Side of Syracuse.”

Rosalyn Hurt agrees. “A lot of people think that the South Side is bad, but it’s not. It’s all in how you make it.”

Tonaisa has made the best use of her singing talent, and she doesn’t attribute her perseverance to an idol or a role model. “My ambition makes me want to sing,” she said.

Although usually confident, Tonaisa recognizes the pressure that comes with performing. She recalled one time this past year when she forgot the lyrics to a song during a church performance. She stopped and fled the stage. Tonaisa said she cried for three days over the incident, then thought, “Wait, why am I crying? I sing all the time.

“I have the gift of knowing what key you’re supposed to be in, this and that,” she said. “But the responsibility factor? I’m still a kid. I’m still goofy.”

Tonaisa said that she tried to change before entering high school out of fear that her older peers wouldn’t like her. “I tried to change it and I realized I wasn’t being me, I was being fake.”

Tonaisa intends to go to college and wants to be successful. She said her parents have never given her an option, always telling her that she will go to college. “I’ve always thought that college has to be the next step.”

She hopes to attend either New York University or Princeton University. She even named her dog Princeton, a companion she has had for three years, she said. 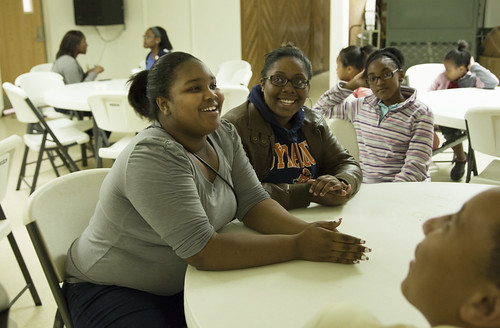 Tonaisa Hurt and her sisters Jah-ni and Charity chat with their friends at Bellegrove Baptist Church. | Katie Hogin, Staff Photo

Tonaisa acknowledges that most of the youth she spends time with on the South Side or at school will not be able to go to college. “If they’re on the streets, that may be all they know is streets because no one gave them that push or that drive to try to make something of themselves,” she said. “But I’m glad I do have that push.”

In the front window of the Hurt family home hangs a sign that reads, “Joy.” Three years ago, while decorating for Christmas, the family decided to leave that sign hanging year-round. “We stand on that,” Rosalyn Hurt said.

Though Tonaisa will always call the South Side home, she has big plans for herself even beyond NYU or Princeton.