Actress Calmesha Givens sits in a room with three other people — waiting — anxious to hear who made the cut. The room is silent as the tension builds. Everyone in the room seems on edge, except Calmesha, better known as “Caly.” She looks confident, sitting up straight with her shoulders back. She has done this many times before.

You might guess this is a typical scene for an aspiring actress, but not in this case. 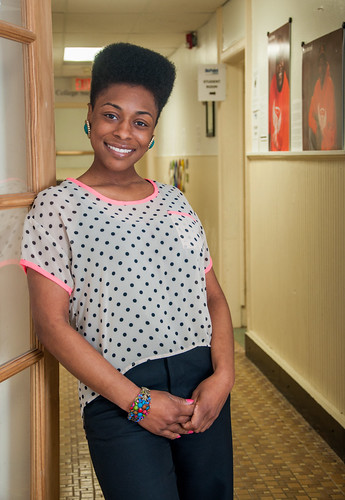 The difference: Givens is behind her desk in her office at On Point for College, where she handles special projects. Givens and On Point student Catri Stokes, along with Catri’s mother, have been placed on hold with Syracuse University admissions. Today they find out if Givens’ six months of helping Catri with college preparation has paid off. As Catri holds the phone nervously to her ear to find out if she’s been accepted into her first choice, Givens is relaxed. They’re missing some paperwork, Catri says as she hangs up the phone. Givens gets right on the computer and tells Catri the steps she needs to take moving forward.

On Point for College helps high school students to transition into, and graduate from, college. “From application to graduation” is the On Point motto. Givens is a full-time employee who says she’s wanted to help the youth.

“When I was young, I used to teach my younger cousins how to write, how to spell words. I was like a teacher at a very young age. I’ve always done this type of thing. This is just what I love. I do a lot of motivational speaking, mentoring. I really think it’s just part of my personality,” Givens said.

Catri’s mother, Demetria Gunn, said she would be lost without Givens. “She helped me with going through this whole process of getting her ready for college. I mean starting the financial aid process, applying for all the applications for Catri to go to college. Every stop sign, every problem that came up with all the schools, I came to her and she was right on it with me.” 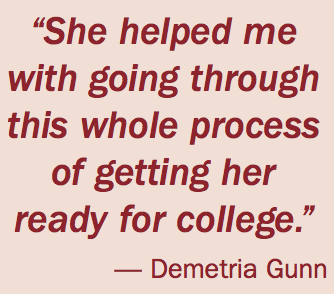 Catri eventually received an acceptance to SU and will be majoring in criminal justice. “She made me feel better, more confident about me getting into the schools,” said a shy Catri.

Givens grew up on the South Side of Syracuse. After graduating from Howard University, she moved to Los Angeles to pursue an acting career, but returned here to refocus her career path. She wanted to be closer to New York City, where she plans to go back to school and get a master’s degree in theater.

“I don’t want to be a face on TV. I want to be the best that I can be, and I feel the only way I can do that is to seek professional training in grad school,” she said.

Givens was a student at On Point for College, and she credits the program for helping her overcome many obstacles she faced growing up on the South Side. Because she has gone through the program herself, Givens feels especially qualified. “I feel like it’s more of an inspiration to the students to see that ‘OK, she’s gone through the program, now she’s here giving back.’ I think they’re also more open to taking (my) advice,” Givens said.

On Point for College Deputy Executive Director Samuel Rowser worked with Givens when she was in high school. Now being able to see Givens on the opposite side, working with young people, Rowser believes that Givens truly has a gift.

“It has to be something that is innate in you that you really want to do, and I see that in Calmesha. Without
a lot of training and a lot of direction she’s able to talk to students where they’re at and help them get to where they need to be,” Rowser said.

“We really did not expect for it to become what it became and eventually the gang became well-known throughout the city,” Givens said. “Being one of those gang members I feel like it really made me a stronger person, and it also made me realize how much more is out here in life than what surrounded the streets of Syracuse.”

Both of her parents were incarcerated when she was young. “My father was a really big drug dealer, I guess you would label him a kingpin here in the Syracuse area. And when I was 5 years old my father went to prison, and my mother went a little bit after. Once they went off to prison my maternal grandmother raised me — it was probably about eight, nine of us in one house.”

Givens describes her grandmother as a strong, single parent who expected a lot from her and her siblings. She realizes her life could have been much worse if it hadn’t been for her grandma. “I’m very thankful that she was in my life and thankful that she took both my brother and my sister and I in,” she said. 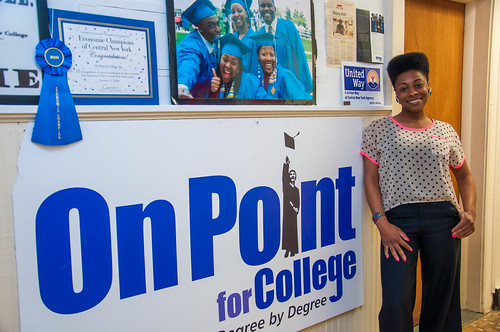 Rosalie Bailey, Givens’ grandmother, is proud of her. “She’s done very good, she surprised me. I prayed the Lord for her, and I’m glad I lived to see it.”

Both of Givens’ parents are out of prison and live in the Syracuse area. She has built a close relationship with them over the years, especially with her mother.

In 2008, Givens graduated from Howard University, where she minored in theater arts and received a bachelor’s degree in administration of justice. She was in her final semester of undergrad when she decided she would seriously pursue acting as a career. Since graduating, Givens said she has landed various roles, including Shaqueeta, a lead character in the play “Invisible Women Melting,” by Jessica Ann Mitchell. She starred in the short film “Venus Jungle Jig,” and played a role in the independent film “Black Butterfly.” In Los Angeles, she landed roles for television shows such as “Glee.”

Now, Givens is a member of the Southside Community Coalition. “Their mission is to revitalize, rejuvenate and restore the South Side area, so that’s another organization that I’m a part of, as well as the Kirk Park Colts. I used to be a cheerleader for them. I usually go back and coach. … And of course the Paul Robeson Performing Arts Company.”

Givens is the new director of development there.

It is where she landed her first major role, in the play “Invisible Women Melting.” Ryan Johnson-Travis, artistic director of the arts company, speaks highly of Givens. “Caly is great. She works hard, and she is an incredible resource not just for PRPAC but for the entire Syracuse community. I’ve seen the people that have been affected by her inspiration, and I’m really thankful to say that I know her. Because in time, we’re going to look back and say ‘Oh my God remember those days?’ Because she’s going to ‘blow up,’ ” Johnson-Travis said.

Givens says she plans to continue to give back.

“I’m always going to be a part of On Point, even once I have soared and I’m at that place where I want to be. I always think about what size my first check would be, and I always say, ‘Such and such is going to On Point for College.’ ”