The Rev. Colette Matthews stands out in a male-dominated ministry

Purses in the pulpit, stilettos stomping to the beat of drums, lipstick-laden lips singing praises to God and skirts draped at the knee with handkerchiefs.

These are the sights and sounds of New Covenant Baptist Church on the South Side of Syracuse under the leadership of the Rev. Colette Matthews. In a country where female pastors are rare, Matthews has been the leader and driving force here for the past four years. 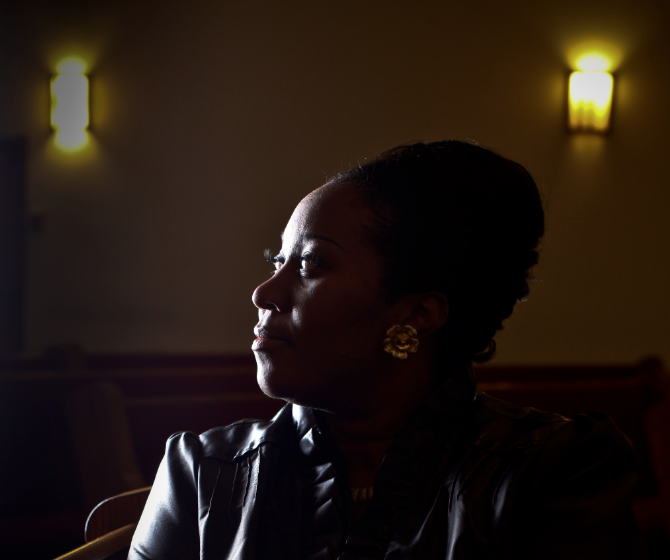 The Rev. Colette Matthews is not easily deterred. She waited a year to be licensed to preach and now preaches at the New Covenant Baptist Church on the South Side of Syracuse. -- Mackenzie Reiss

At 5-foot-3, it’s as if she can barely see over the pulpit, but that doesn’t stop her from delivering a powerful message. Matthews has an engaging disposition and preaches the word of God harder than 20 men put together. Nearly a month ago at the 11th annual Candlelight Service at New Jerusalem Missionary Baptist Church, the Rev. Jimmie Lee McMillon Sr. was so moved by her words, he shouted, “She’s just a short little ol’ fireball. She can tear a church up!”

During one 11 a.m. service, Matthews reached the climax of her sermon and transformed. No longer able to suppress her intense emotions, with an embroidered towel that says “Pastor” draped across her left shoulder, she put one hand on her hip, dipped to the side three times and unleashed the fire she felt inside.

The drummer saw she was on a roll, and heightened his level of playing. This nudged her on as she shouted, “We have to break the curse of mediocrity. … God can take a mess and make a miracle.” In agreement with their leader, the three female associate ministers she has taken under her wings throughout the years jumped from their seats in the pulpit, and a congregation of nearly 100 sprang to its feet. They needed more, and Matthews gave them more. “God is like a gas station. When you’re running on empty and you need to fill up, God will put His pump in your belly and fill you up,” she exclaimed.

As hard as she preaches, once praises have been lifted and the crowd has simmered down, Matthews is as graceful as a dove. Though her preaching can match that of any male, she is certainly all-woman; as she beckons onlookers to give their lives to Christ or come down for special prayer, she speaks in a sultry voice that captivates.

As captivating and intriguing as Matthews is, women in the pulpit are not always embraced, and female pastors are rare. According to the Hartford Institute for Religion Research, religious organizations like the Southern Baptist Convention, the Free Methodist Church and the Assemblies of God are known to be more conservative. Combined, the pastoral population for these organizations totals nearly 60,000 — but fewer than 10 percent are women.

As fiery a preacher as Matthews is, she didn’t set out to preach the word of God. “I studied political science at Syracuse University and ran for office a couple times.  I was about 25 or 26 years old working in local government, but I felt this tugging in my spirit. God was calling me,” she said.
When Eric Dickson was asked if he ever thought his childhood friend would be the pastor of a church, he thought back. “Colette has always been a good person with a good heart. Even when we were growing up together she loved God, and I knew He had a bigger plan for her,” Dickson said. Though Matthews was called to lead a church, statistics show not every female minister is allowed this opportunity.

According to an article published by The State Journal-Register of Springfield, Ill., in a survey conducted by the Barna Group, one in 10 churches employs a woman as head pastor. The Hartford Institute for Religion Research estimates there are roughly 335,000 religious congregations in the United States, which suggests only 33,500 or so are led by a woman.

Yet according to the U.S. Census, the American population totals just over 282 million people, and at 144 million, women out-number the male population of 138 million. 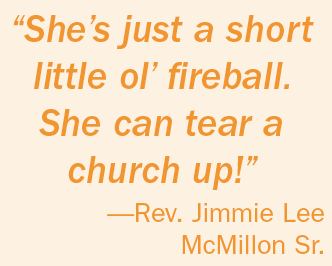 Matthews is a rare case in more ways than one. In addition to New Covenant, she also pastored at United Baptist Church for two years. “United is an American Baptist church, and they tend to be more open to female pastors.  National Baptist churches are not as open,” she said.

During a time when most female ministers only dream of pastoring a church, Matthews knows she’s blessed, but the journey to hold the esteemed title of pastor or even minister for that matter, was not easy. “It took me about a year to convince my pastor to license me. I had to keep meeting with him and made sure I worked hard and stayed visible in the church,” she said.

Her pastor was the Rev. Leslie Johnson of Tucker Baptist Church. “I didn’t believe in women preachers, but the more she kept asking, the more I thought about it,” Johnson said. “I asked God to send me a sign if it was His will for me to license her. One day I was watching Bishop G.E. Patterson on television, and I heard him say, ‘If women can sing in the choir, work on the usher board and be deaconess in the church, then why can’t they be ministers?’ That was all I needed to hear, and I knew that was my sign from God,” he said.

The day Matthews announced that she had been called to preach was memorable. “As soon as I said it, I got a big round of applause from the church, but afterwards, an older member walked up to me and shook her finger in my face and said, ‘You’ll never preach in this church.’”

Shortly after becoming a licensed minister, Matthews quit her job and enrolled in Colgate Rochester Divinity School. “People thought I was crazy.  I was young, I had a good job and could have been a rising politician, but God had something else for me.”

As Matthews pressed forward in the ministry, her new calling did not come without opposition. “Some pastors didn’t want me to preach in their churches, and even when invitations were extended, they told me I had to preach from the floor,” she said.

Declining those invitations, Matthews also faced other opposition from a less obvious group. “Often times it would come from women — mostly from women my age.  There was a group of women in the church in their 30s and 40s; they stirred up a lot of trouble. Those were some rough times, but the elders and deacons were on my side.  Those women eventually left — they all left at once.”

Despite the struggles she faced early on, there is one woman who is proud to stand by her side, Armor-bearer and Minister Brenda MacDonald. “I’m so glad to have Pastor Matthews as my friend, but most importantly as my mentor. She has taught me so much in the ministry.”

Even with all that Matthews endured while charting “male-only” territory, she has remained humble and made light of her struggles. “My journey is not unique.  Any female pastor has probably experienced some of the things I’ve experienced, but without prayer, there’s no possible way I would even be able to withstand the things I’ve endured.”