“I’m so happy that I finally get to spoil someone,” Sprague said at her home. “I didn’t get a chance to do that with my first child so I’m very protective of her.” 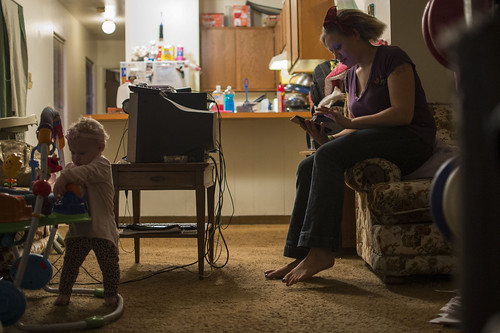 Sarah enjoys several storage bins crammed with clothes, books and toys, sure. But she has a good diet, too, and is benefiting from healthier foods provided in recent years through WIC, the program that provides federal grants to states to help young families like Ashley’s. A new study just completed in New York state — the first such research nationwide — shows new guidelines for what moms and dads can buy are working.

“This food is helping her eat better. Now she’s able to drink things like regular milk, when before she was just on Enfamil (formula),” Sprague said. Sprague, 22, of East Syracuse, said what she buys with WIC funds is helping her 1-year-old transition into solid foods as her body and mind develop. She seemed to enjoy her new solid food recently, munching on her breakfast of sliced apples as her mom talked with a visitor. The seven food packaging options under WIC transition children from baby food into solid foods.

“Isn’t it so good to finally hear some good news?” said Merilee Mohr-Twardowski, who is Women, Infants, and Children coordinator of Onondaga County. Under her supervision, approximately 11,500 women and men are able to meet the nutritional health needs of their children. With the below-poverty rate of 32.3% in the city of Syracuse alone, the WIC program is an important way to help people purchase healthy food.

The WIC program helps promote healthy weight gain and nutrition statewide to 125,000 low- income pregnant, post-partum or breastfeeding women, as well as 400,000 infants and children up to the age of 5 each month, according to the state health department.

Until four years ago, little had changed with WIC food packaging. Since its origin in 1972, the WIC food packages provided milk, cheese, eggs, fruit juice, infant and adult cereals and infant formula with relatively lenient guidelines. After 1980, foods such as beans, carrots and tuna were added. In 2007, the federal Food and Nutrition Services issued a rule that revised the packages to make food options stricter and healthier. All WIC state agencies were required to implement the improvements.

The New York State Health Department released a statement in January of this year reporting that “the results of a recent study show a positive connection between the new food package being provided under New York State’s Supplemental Nutrition Program for Women, Infants, and Children (WIC) and a decline in obesity and overweight among children enrolled in the program.”

New York state was the first to revise its packaging by January of 2009. According to the Nutrition Assistance Program Report Series, changes in WIC introduced new food categories, revised maximum purchase quantities and provided the option for state agencies to implement new food substitution policies under each of WIC’s seven food packages. Mothers and children worked with a more balanced group of foods that reflected the dietary recommendations to consume less fat and sweetened beverages, and to eat more fiber and fruits and vegetables.

Sprague is happy to receive such good-health help, but acknowledges there can be disappointment. 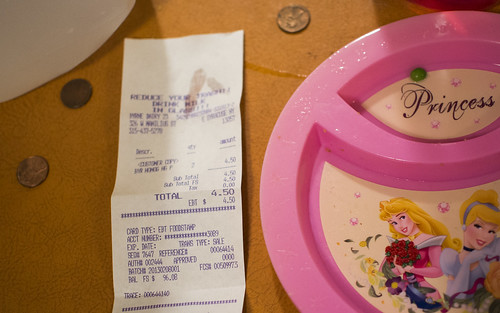 “With some of the checks, they can be a little strict and you can only have a certain amount of food. When I would go shopping somewhere like Wegmans, besides her (Sarah) getting what she needs to get, they may take one of the jars of food away because of the price. And it’s like my daughter gets all of this off of WIC, why can’t she have one more jar? It’s not like she doesn’t have enough food already, but it’s kind of like you’re taking food from a baby,” Sprague said.

Sprague was receiving approximately $15 per check (out of $400 per month) to go toward jars of baby food for Sarah as she was transitioning into solid foods. She said there were a few times when  she couldn’t buy as many jars as she thought Sarah should have. So to cover the balance, she paid out of pocket. “Of course I’m not big with paying out of pocket, so I just thought that it was a little unfair that I would sometimes have to put some of her food back on the shelf.”

But, she added, “Sometimes you have to give up a few things to get what you and your child really need.”

To help out, Sprague takes her friend Emily along for her shopping trips during the first week of the month. “Emily has a pretty good understanding of WIC and all the guidelines, so she helps keep me on track with everything. I never exceed the cost given to me or pick the wrong food or number of ounces anymore.”

Since Ashley has been a recipient of WIC checks since the rules were revised, she never shopped for food for Sarah when the guidelines were less strict. But before the rules were tightened, Sprague would have been able to purchase 2 to 2½ dozen eggs each month. That has been cut back to a dozen eggs per month. There were no restricti

ons on milk before the revisions. This allowed women to purchase whole milk or Vitamin D milk, which have a larger fat percentage than milks in the new guidelines, such as skim or fat free milk. (In addition, the number of quarts has been minimized).

Baby Sarah — at 29 ½ inches — is among hundreds of the thousands of New York state babies who are helping to “make a dent” in the obesity rates among children, the state said in its recent report on the study. As recently as 2003, the obesity rate among children was more than 20%. The State Health Department says, “Researchers compared early childhood obesity prevalence and related healthy behaviors for New York state children enrolled in WIC prior to and after the implementation  of the changes in the food packaging. Results show post-implementation improvements in healthy eating behavior along with a continuing decline in obesity and overweight that is greater than the national trends.”

Ashley beamed with joy as she hoisted Sarah into the air and gave her a peck on her rosy cheek. She giggled, “She’s a chunky baby, but it’s a good kind of chunky, you know? She’s growing and getting all the food she needs, and I’m so thankful for that.”