A call to action with a little help from Hollywood

Mayor Stephanie Miner’s office, along with a number of various organizations including Mother’s Against Gun Violence, held a panel discussion featuring notable Syracuse figures and Hollywood actor Khalil Kain at the historic Landmark Theatre Thursday, March 21. The issue at hand? How to help prevent the rise in gun violence among our youth. 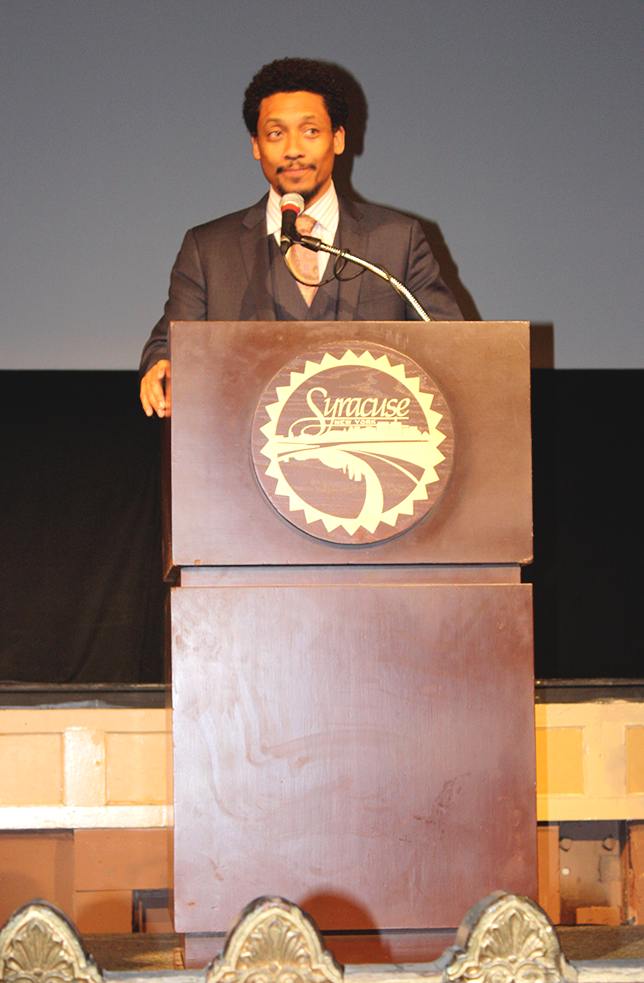 Keynote speaker Khalil Kain, and actor and activist, has been touched by gun violence in his personal life. | Photo by Natalie Caceres, Staff photo

A slew of Syracuse figures of authority and community members gathered to hold a discussion panel called “Stop The Violence: A Discussion On Guns in Our Community.” It’s a topic that for many in the audience, which had at least 100 in attendance, hit close to home. Miner opened up the discussion by saying that the Syracuse community needs to celebrate all that is Syracuse by coming together and talking about this often hush-hush topic.

Other panel members included Assistant U.S. Attorney John Katko, Syracuse Police Chief Frank Fowler, Syracuse Common Councilor and Mother’s Against Gun Violence member Helen Hudson and Firearm Safety Instructor and lobbyist Scott Armstrong, to name a few. The event was co-sponsored by Mother’s Against Violence and the Trauma Response Team of Syracuse, two organizations that consistently deal with the fatal consequences of gun violence. Actor and New York native Khalil Kan, asked by Miner to come and speak, also started the discussion by sharing his personal story and emphasizing that however one feels about the issue, all need to take action.

“Our youth is brilliant. They can do anything they want, but they don’t know that,” Kain said in regards to part of the overall problem. “It’s our job to tell them that they are beautiful and brilliant. You all as individuals need to start deciding to do something, anything, we are in a desperate time right now — we all need to pitch in.”

Kain, who is most notable for his rule as Raheem in the 1992 film “Juice” starring the late Tupac Shakur, is no stranger to violence. Born in 1964, he grew up during some of the roughest times on the lower East Side of New York City. A witness to violence in his early years, Kain says that the murder of his cousin helped him come to terms that reacting to violence with more violence, although easy, only makes one a weaker person. Raised by a single mother, who had Kain at 17, and by 24 had two other children, he says that his success in life would not have been possible without a role model like her.

“The only way I was able to make good choices was because of my mother’s love,” Kain told the audience. “She was persistent and passionate to let us know that if everybody else hated us, it didn’t matter because she would always love us … she never put us down.”

The Stop the Violence forum was held Thursday, March 21, at the Landmark Theatre downtown. | Photo provided by City of Syracuse

One of the main topics brought up by Kain and touched upon by almost every other panel member, was that of empathy. It’s something they say some youth are lacking, and many feel is a cause for violence.

“I’ve asked some of these people if they ever feel bad about killing the person?” said Assistant U.S. Attorney Katko. “Never has anybody said yes. We need to change that. We need to teach empathy.”

Hudson also spoke out by saying that the violence starts at a psychological level and is perpetrated when that psyche is shared amongst groups.

Audience members were allowed to write down questions on notecards, passed around by Mother’s Against Gun Violence members, which the panel was then given to answer. One topic that came up was the lack of resources and programming available to youth that could help keep them off the streets.

“There are not enough things to do in the community,” Arnett Haygood-El of the Trauma Response Team said. “There are a lack of resources for young men and women to reach their potential.” Many in the audience agreed. Mayor Miner reinforced the idea that it’s not just the lack of programming but the low turnout of community help.

“You have to work with us to help — whether it’s showing up, refereeing a basketball game or helping trauma response,” Miner said. “What we find is that we need more people to come together and help these programs because when we give, then we can change our community.”

Two young boys in the audience, Jeffry Mateo, 16, and Kalyse Cannon, 12, were inspired by the panel and Kain and hope to continue to do good in their community. 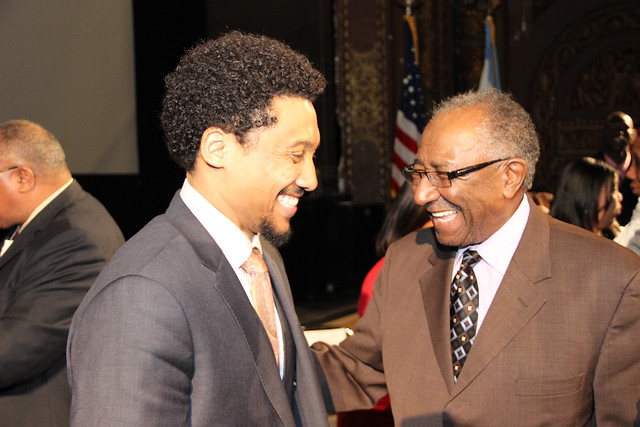 “Seeing his movie [Juice] and then having him come talk about violence was a really great thing,” said Mateo, a sophomore at Henninger High School.

“It makes us want to do good things,” Cannon, a sixth-grader at Blodgett, added.

The panel went on for about an hour and a half, eventually closing out with the request for those in attendance, and those not, to take action — plain and simple. Kain put it best when he said that all it takes is, from both parents and youth, is to make a choice.

“Me standing up here is doing what I can do,” he shared. “But at least I’m deciding.”

Keynote speaker Khalil Kain of the Stop the Violence event poses with forum attendees. | Photo provided by City of Syracuse