A widow in her 80s once wrote to Kerry Quaglia, thanking him for fixing her roof. Now, she told him, she wouldn’t have to lug heavy trash cans upstairs to catch the rainwater leaking through the cracks, and she could sleep peacefully at night, gratefully.

Home HeadQuarters, an organization that works to revitalize neighborhoods and create housing opportunities for people of all income levels in upstate and Central New York, often encounters such questions. 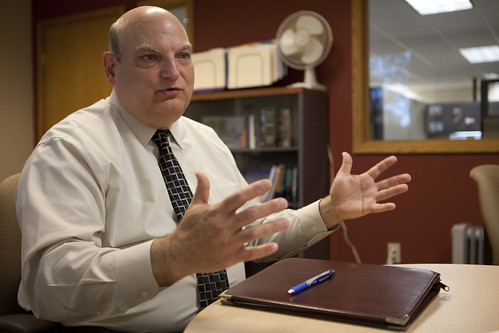 Kerry Quaglia is the executive director of Home HeadQuarters. -- Photo by Allison Milligan

With loan programs such as its urgent care program, Home HeadQuarters can help people like the widow with the leaking roof. People can repair the homes they have lived in for decades, paying back just 20 percent of the cost at $20 to $25 a month, Quaglia said. Federal grants can help pay for the rest, he said.

Quaglia, who used to be the director of the city’s housing department, founded Home HeadQuarters, located at 990 James St., in 1996 after growing frustrated that the city was not accomplishing enough for housing, he said.

“I just felt that as a city, we weren’t leveraging enough dollars into the housing arena,” Quaglia said. “We needed to do a better job trying to get banks, credit unions and other financial institutions involved in housing.”

The best platform to channel more money into housing was as a not-for-profit organization, he said.

Andrew Maxwell, director of the city’s Bureau of Planning and Sustainability, said Home HeadQuarters has been a “real partner” to the city and the South Side community during the six years he has been familiar with the organization. Home HeadQuarters lends to more than five counties in New York, but “they continue to be focused on the South Side as one part of the city where their services can really make a big impact,” he said. 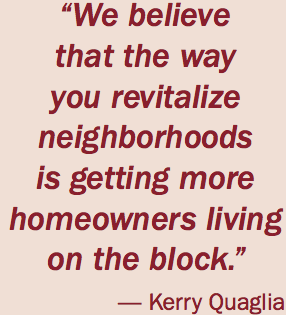 Home HeadQuarters functions like three agencies in one, Luckett said, and there is a lot of interdepartmental coordination.

“We’re a very collaborative group,” she said. “There’s a lot of crossover between departments.”

In its real estate and development track, Home HeadQuarters redevelops 35 to 40 properties a year, constructing about 15 new homes in the inner city and rehabilitating about 25 “in some of the worst neighbor- hoods,” Quaglia said. From tax delinquent properties to vacant homes, Home HeadQuarters purchases distressed houses and renovates them, later turning them over to home occupants, he said.

“We don’t ever sell to investors or landlords,” Quaglia said. “We believe that the way you revitalize neighborhoods is by getting more homeowners living on the block.”

One example is the 200 block of Kennedy Street on the South Side, which had a number of abandoned homes about four years ago, Quaglia said. Home HeadQuarters has constructed five single-family residential properties there, and has sold two of three homes that are next door to each other. One is already occupied. 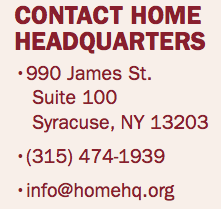 “It was not a street homeowners felt comfortable moving onto,” Quaglia said. “We’ve turned this from one of the least desirable streets in the neighborhood to one of the most desirable.” One of the occupied homes already has flowers on the porch, he said.

Luckett said two construction projects have been completed on Woodland Avenue, also on the South Side.

In addition to interdepartmental crossover, Home HeadQuarters collaborates with outside groups, such as Syracuse United Neighbors and the city’s department of Neighborhood and Business Development, Luckett said.

Home HeadQuarters’ ability to collaborate with others, Maxwell said, helps it maximize tax dollars.
“They make a lot of great things happen with very limited resources,” he said, stressing the professionalism of the staff.

“We have a lot of different irons in the fire,” said Schroeder, who has been working at Home HeadQuarters for about nine years. “We’re all very passionate.”