PRPAC’s season premier set in the South Side

When Ryan Johnson-Travis wanted to create a play based on the lived experiences of people that his actors knew, a beauty salon on the South Side seemed like the best setting.

But when talking with his mother, whom he says is always his inspiration, she urged him to set it in a consignment shop, a business where people sell their high-end clothing in order to make a profit for themselves.

“I thought about that and the idea was great because it lent itself well to the bartering, the exchange, looking at resources, being an entrepreneur in a city such as Syracuse,” he said. “So it enabled us to examine a lot of issues, in addition to the social relevance piece.” 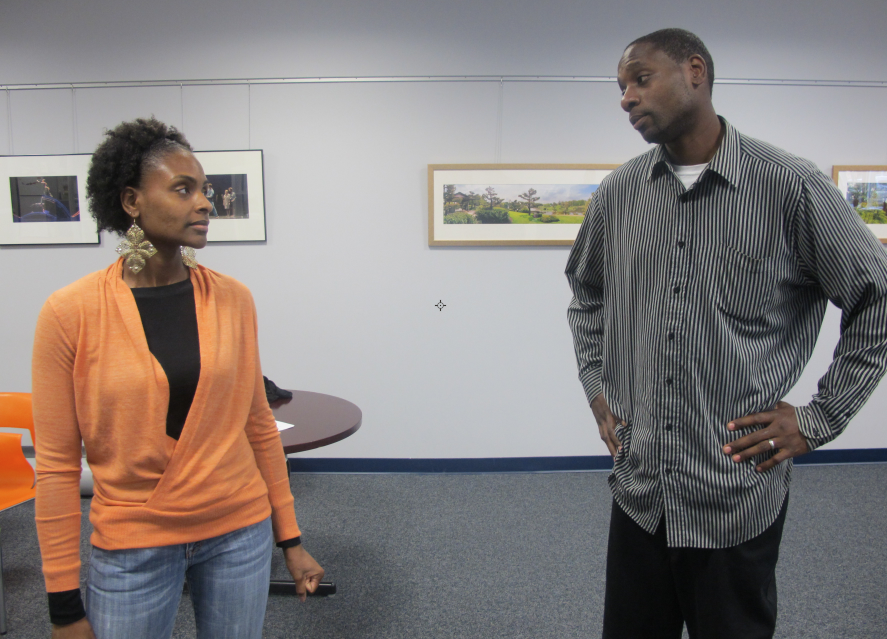 The play, “Aunt Dee Dee’s Consignment Shop,” follows Aunt Dee, a woman in her late 40s, who owns a consignment shop on the South Side that becomes a space of refuge for the community. The play, which features about 11 different actors, highlights a variety of issues, including domestic violence, gun violence on the South Side, bullying of young people, coming-of-age issues and forgiveness.

“‘Aunt Dee Dee’s Consignment Shop’ is a play that actually explores the lived experiences of people that the actors know in Syracuse,” said Johnson-Travis, artistic director for the Paul Robeson Performing Arts Company. “So essentially the play is what one might consider a devised piece that’s birthed out of the lived experiences of community members.”

The play will be staged starting at 8 p.m. each evening Sept. 26 through 28th at Jazz Central, located at 441 E. Washington St. 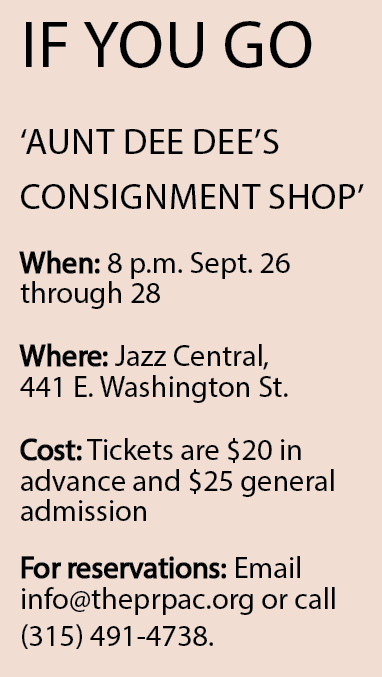 Some of the other characters featured in the play are Ophelia, a woman in her early 30s whose marriage is in turmoil; Mel, Ophelia’s brother, who struggles to understand African-American women; Reigna, who works with battered women and started her own business; Lessley, Ophelia’s husband, who has experienced molestation and abuse; and Grandpa Pete, who is silent but the characters all come to him for advice.

Johnson-Travis gave the actors scenarios and, through improvisation, they run through the scenes multiple times, tossing out ideas until the plot eventually begins to take a dramatic texture. This is where Johnson-Travis steps in, shaping it and inserting into the larger story.
“What the audience is going to see is a piece that explores the number of issues that specifically affect the Syracuse community,” Johnson-Travis said. “So we’ll have some fun references in terms of businesses and organizations, but the heart of the play deals with this woman, Aunt Dee Dee, and the people who come in and out of her shop.”

The South Side was the neighborhood that the actors could identify with the most, Johnson-Travis explained.

“When we talked about the themes we wanted to deal with and the street names and the businesses that we were talking about in the creation process, it just made sense to set it in the South Side,” Johnson-Travis said. “And there’s such a rich history around cultural experiences in that part of Syracuse.”

Robert Jackson, who plays Lessley, lived on the South Side for a total of 26 years. He said that the consignment shop mirrors his experiences growing up in the neighborhood.

“The place to hang out and talk was always the barbershop growing up, and the aspect of him using a consignment shop,” said Jackson, “it still can relate because people come to the consignment shop to talk: tell their problems, gossip, per say, what’s going on in the community, stuff like that.”

But Jackson stressed that the play highlights the positive aspects of the South Side, too. His character, Lessley, is a lawyer. Many county legislators, councilors, doctors and lawyers came from the South Side. He also cited big-time figures who have been abused, hurt, molested or part of gangs but strived to do better for themselves and their families.

Indeed, the play touches on issues that hit close to home for most of the actors. Jackson said that whenever he went to the barbershop with his father as a young boy, he would hear about some of the issues that the play addresses. For example, his character Lessley is abused by one of his relatives.

“I can relate to that because it happens a lot. It’s sad, but it does. Me growing up and going to the barbershop with my dad, just some of the stuff that they would talk about,” Jackson said. “Anything could be brought up, from the girl walking past the window with the wrong leggings on to the football game that’s on TV.”

In one scene, Aunt Dee Dee discusses the death of her son, Ray Ray, something that actress SonCeria Warren, who has lived in Syracuse her whole life, can relate to: her 16-year-old cousin went to a party and was shot.

“He got hit by a stray bullet by a 30-year-old who shot him to the ground. He felt disrespected and that’s what happened,” Warren said. “That was that. That’s with me still. There’s a lot of different things in here that a lot of people can relate to.” 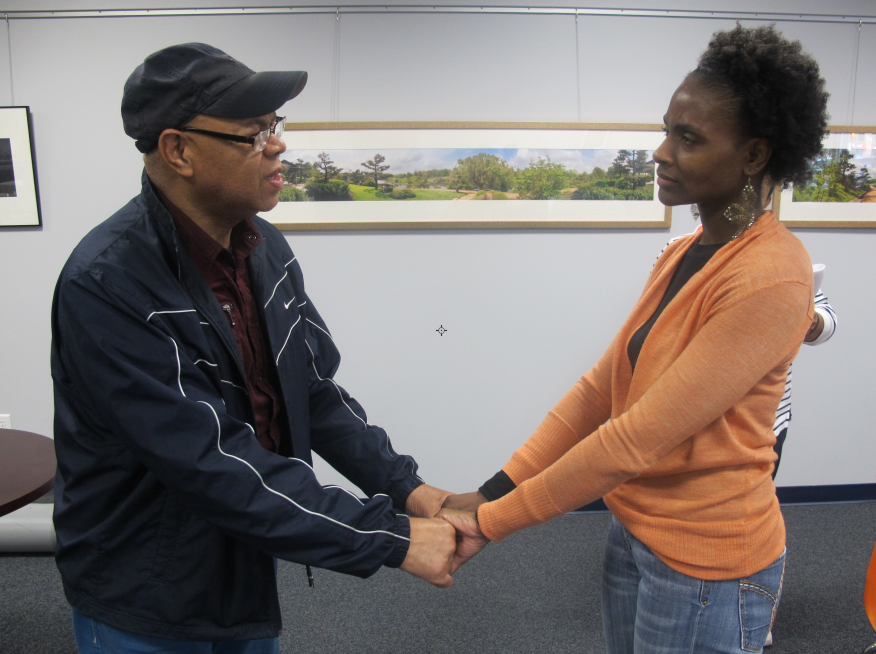 Actors Charles Anderson, who plays Grandpa Pete, and Juanita Perry, who plays Ophelia, stand together during a rehearsal session.

She also said that the abuse that Ophelia receives from her husband is something that she has not directly experienced but has seen other people close to her go through.

Although the production is set on the South Side, the play tackles universal issues that anyone in the city of Syracuse could relate to.

“I think that black people can identify because a lot of us live on the South Side,” said Charles Anderson, interim president of the Paul Robeson Company’s board, who plays Grandpa Pete and has been living in Syracuse since 1967. “But anybody coming in can see this as a slice of life that they may or may not be familiar with, but the issues, I think, are very universal.” 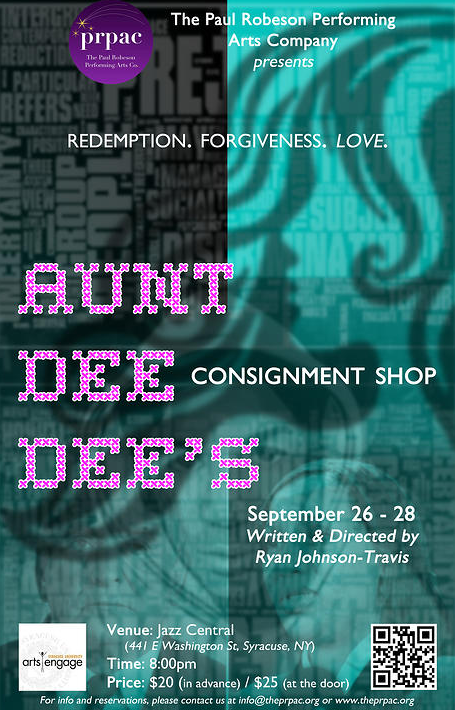