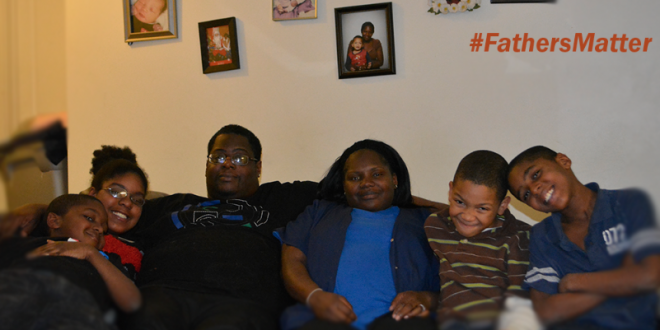 Following death of wife, South Side man takes on role of single father 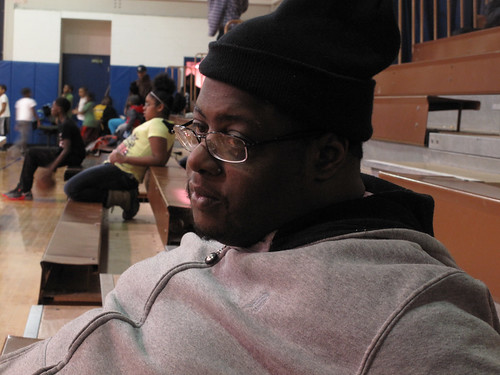 Ricky Worley watches his sons and stepson practice for their last basketball game of the season while his daughter Nevaeh looks on in the background from the bleachers at the Southwest Community Center gym. | Ashley Kang, Staff Photo

Nevaeh Worley, 10, laughs in the living room of the family home, mimicking her father, Ricky Worley, who is sure to be standing and cheering for his sons as they make their way to the basket during one of their Saturday basketball games.

Worley, 39, is a single father who splits his time working as a line cook at TGI Fridays, getting his children on the bus to and from school, and making it back in time to volunteer as a coach for his children’s basketball team at the Southwest Community Center.

“He’s always the loudest one,” said his son, Ricky Jr., 9, of his father’s unshakeable presence on the sidelines.

Worley explains: “It’s important to be involved with kids. I believe it’s my calling.”

For Nevaeh Worley, some of her special moments with her father happen before the day begins. “He does my hair daddy-style. It’s real cute!” she said with a grin.

Being involved with his children has never been a question for Worley, who was taught by his own father that “it’s a man’s responsibility to provide for his family.”

But that doesn’t mean the journey has been effortless for a man whose own dad passed away more than 20 years ago. 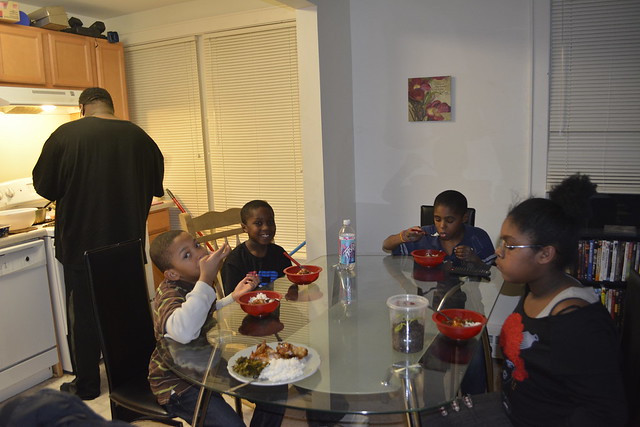 Ricky Worley prepares dinner for the children. His love of cooking helps bring the family together. | Drew Thomas, Staff Photo

Being a single father wasn’t in the plans for Worley. Just one year after his youngest child, Quantae, now 7, was born, Worley’s wife died after suffering a heart attack caused by long-standing health and weight issues.

“It’s a day I don’t forget, but they were so young that they don’t remember,” Worley said, recalling the heartbreaking day when he found his wife unresponsive on the floor of their South Side home.

“It was a big transition. But I stopped everything to take care of them,” he said of the children.

For Worley, “stopping everything” meant starting over, a new chapter in his life where he has worked relentlessly to be an active provider and presence in his children’s lives.

It was a big change for his own mother, too. Carol Worley, 64, stepped in and became a crucial player on the team when her son began picking up the pieces to get back on his feet after suffering the loss of his wife and mother of his children.

The kids’ grandma-turned-mom moved out of her senior living building and into a rented home on the South Side with her son and his children. Today, she looks back emotionally on it all.

“The one thing he stood firm on was his kids. He’s never thrown his hands up and said, ‘I just can’t do this,’” she said.

It still brings a smile to Carol Worley’s face when she recalls the time she spent living with her grandchildren and the progress her son has made in raising his family.

Though his father is no longer alive, Worley attributes some of his core values as a parent to him. Growing up with a pastor as a father and a mother who didn’t take “no” for an answer, Worley learned by example exactly what it meant to be an involved parent. One thing he remembers was spending every Sunday at church, a mandatory routine instilled by his father that has kept Worley grounded in faith throughout his life. 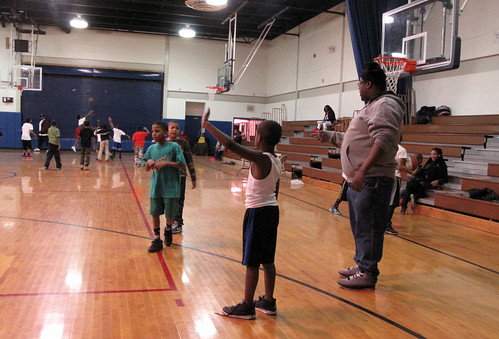 “Even when it seemed to a lot of people like I had nothing, I had my family, and family is the only thing we really have,” Worley said as he watched his sons on the Southwest Community Center basketball court where they practiced one recent Tuesday.

After his wife died, Worley began starting his morning routine with his three children, commuting as a family on the city bus to his children’s bus stop for school. And, routinely, Worley would accept the positive messages shared in passing by Charres Burnett, 32. Burnett, a single mother to her son, Sayvion, 8, recalls seeing Worley when he would send his son on his way to McKinley-Brighton Elementary School in the morning.

“She always had something uplifting to say, and I needed that,” Worley recalls of Burnett. “Eventually, she asked me out on a date to a Tyler Perry movie, and we’ve been together every day since,” Worley said of his now-fiancee, who is expecting their first child together. 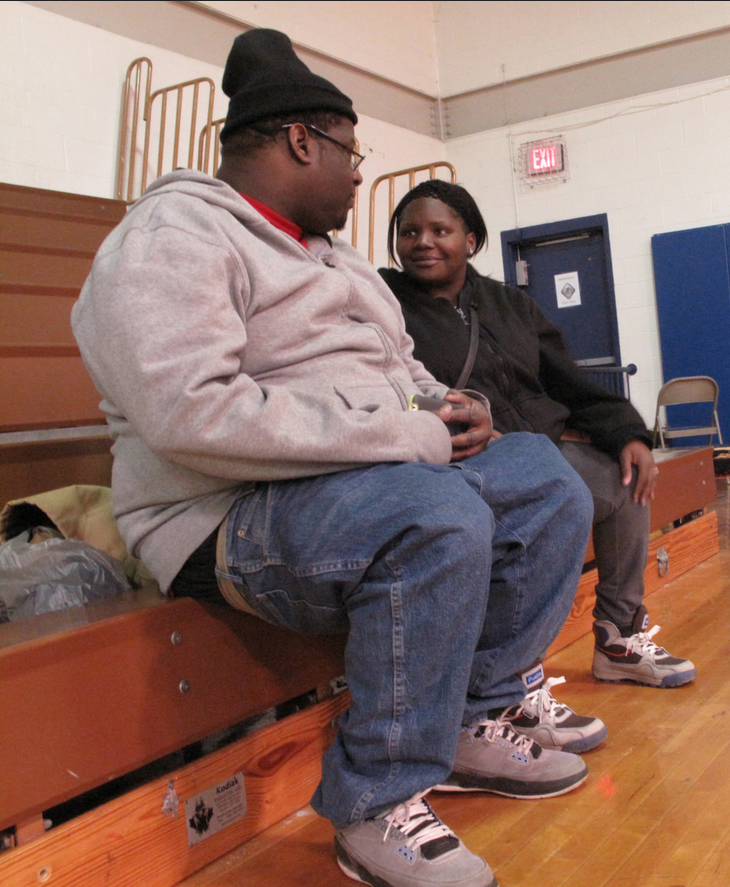 Ricky Worley talks with his fiancé Charres, who is expecting a baby girl in June, before their children start basketball practice at the Southwest Community Center gym. | Ashley Kang, Staff Photo

“He treats my son like he’s one of his own,” Burnett said of the way Worley has embraced Sayvion since they have joined their families. When he’s cheering from the sidelines every Saturday, he’s cheering for Sayvion too.

Worley and Burnett decided to move Worley’s family out of the South Side and into Burnett’s East Side apartment, where long days end in laughter, dance competitions and the aroma of Worley’s barbecue chicken, rice and collard greens.

Carol Worley recalls her son’s love for cooking from the time that she stayed with him and his family. “I think that brought him and the kids even closer together after his wife died.”

While the kids laughed and stuffed their faces at the dinner table on a recent March weeknight, Worley tidied the kitchen and explained his pride for his children’s accomplishments, both on and off the basketball court.

“I got an award at school,” Nevaeh humbly bragged to her younger siblings.

Just as seriously as he takes participating in his children’s extracurricular life on the court, Worley makes sure that school is their priority.

“I let them know they have to do well in school if they want the privilege of doing the extra things that they want to do. So far it’s working,” Worley said. 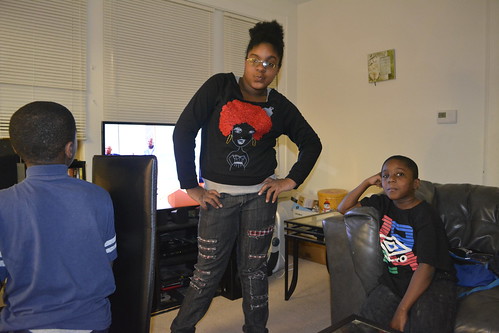 And Nevaeh Worley has set the bar high for her younger brothers by making her father proud as an honor role student. She flipped through her folder of homework assignments boasting about her A+ grades on her math assignments, but complaining about her reading comprehension assignments that she struggled with the night before.

Worley stopped her mid-sentence the second she said the word “can’t” in reference to her work. “It’s the ‘I can’t’ attitude that makes me feel like she’s not ready,” Worley said about the option Nevaeh has to skip the sixth grade based on her high performance at school.

He is his children’s biggest supporter, but it’s a call Worley is not ready to make. “I don’t want to push her too quick.”

But there’s another call he’s sure of.

“My next big plan is to legally adopt my stepson and to make Charres my wife.”

Know a Father to Spotlight?

To nominate a father, send a short explanation with contact information to The Stand Director Ashley Kang by calling  (315) 882-1054 or emailing ashley@mysouthsidestand.com