Two longtime residents of the South Side, Sue Wentworth and her daughter-in-law Valerie Wentworth teamed up to help continue the clean up efforts they started three weeks ago. They worked diligently in the warm sunny heat to help restore the positive view of Kirk Park in an area most people may rarely notice.

“The South Side doesn’t have a great reputation due to a lot of violence that has occurred over the years,” Sue said. [But the park] is a great place for families to come and relax  and have an enjoyable time in their neighborhood.”

Sue hopes that the community will continue to work together to keep up the great work that has started with the clean up undertaking. 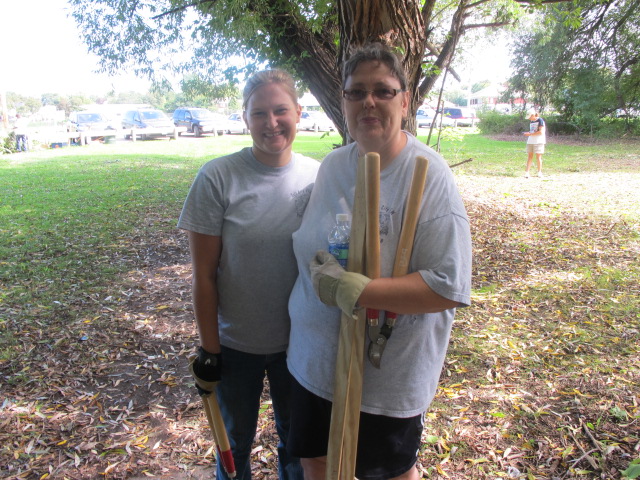 And this pair was not alone. Several community groups including the newly formed Kirk Park Association, 100 Black Men, alumni members of the sorority Lambda Kappa Mu, Mothers Against Gun Violence, the Syracuse Parks Conservancy, Syracuse Healthy Start and the Perinatal and Infant Bereavement Network volunteered Saturday, Sept. 10, to make Kirk Park look like it once did during one of the recently organized Acts of Kindness Weekend events.

Mike Behnke, president of Syracuse Park Conservancy, assisted in cutting down some tree limbs, which were in desperate need of removing. Evelyn Williams, of Lambda Kappa Mu, also helped by clearing debris from the area just over the bridge where the creek runs through the park.

What a great way to see that community volunteers working together in a team effort to bring a positive appearance for the whole park. This volunteer effort fell on the 10-year anniversary of the 9/11 tragedy where so many lives were taken, which greatly affected our country.  It is awesome that some great acts of kindness happened this weekend for the South Side of Syracuse.