Q&A with Mary Nelson on Her Annual Event

The Stand: Is there any additional information about the event that you would like readers to know?

Mary Nelson: It is a community event that is family oriented. I encourage all families to come. I am creating an environment where everyone is paying it forward and getting it back. We are helping the parents, and parents are going to
help other students. We have a band called the Elks Marching Band.I’m asking every parent to bring a dollar donation. And at five o’clock we are going to present that money to the Elks Marching Band to buy new equipment and uniforms. I want to do this because I feel that the parents should give back to the community. We are helping them with the things that their children need for school so they should turn around and help someone. 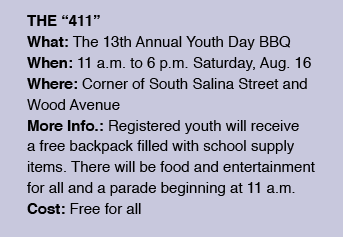 They [The Elks Band] are using the same equipment that their fathers and mothers used when they were younger. We had a Gala, a Black Tie Affair, about two years ago and we had them play. I always said that I wanted to do something for those babies. This is a great opportunity for me to give back to them. We are asking for one dollar per family — not one dollar per student.

MN: I saw a little girl take a pencil and break it into three parts. [Mary laughs as she shares the story] I asked: “What are you doing?” She said: “I’m breaking it so that my sister and brother will get a piece.” I responded, “Baby, not today. You are going to get four pencils, four pens and everything that you need for school.” She was trying to look out for her sister and brother. It was funny to me. That’s why I started laughing. She was wondering why I was laughing. I said: “No, baby. You don’t have to do that.”

TS: Dinosaur Bar-B-Que has been ranked among the best on the East Coast. How would you rank the barbecue served at your Youth Day Barbecue? 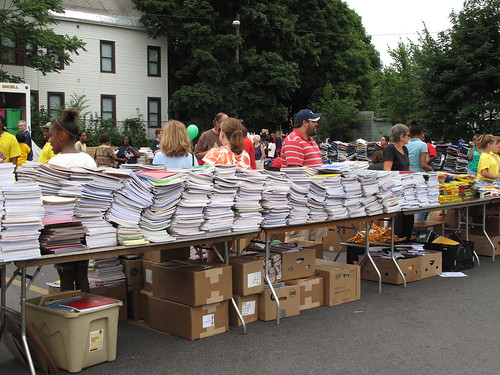 TS: If you were stuck in an elevator with President Barack Obama, what would you say?

MN: I wrote a letter to him and asked him if he would acknowledge our youth when he came to Syracuse. We are one of the “White House Roundtable Youth Centers.” I would ask him, “Why didn’t he acknowledge our youth center and our youth for our backpack program here in Syracuse?” If you go to the Whitehouse website, you will see that the Mary Nelson Youth Center was a roundtable meeting ground for youth. We are the only one here in Syracuse.

TS: How blessed are you and why?
MN: Do you really want me to answer that question for you? People think heaven is up in the sky. Heaven is all around us. Our Father walks with me each and every day. That’s why I’m blessed, because I walk in faith with him.

TS: If you could sing one song on “American Idol,” “America’s Got Talent” or on “Apollo Live,” what would it be and why?
MN: Mariah Carey’s “Hero.” I love that song. I look at all of our kids as heroes — not just Mary Nelson. Our babies are our heroes.

TS: The bio-movie about James Brown “Get on Up” was recently released. If there were a bio-movie produced about your life, what would be the title?
MN: “Beyond the Dream” 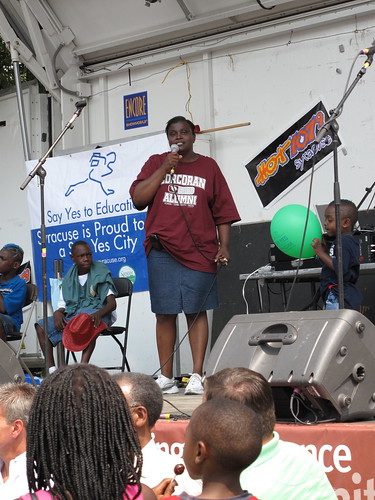 Mary Nelson speaks to the crowd at a previous year's event.

TS: Who would play you and why?
MN: My friend Denise Moore. When I first started this, she was the voice within me. I never had a voice and when I asked her to go speak for me, she always spoke for me. I didn’t have to talk to her about what I believed in. I didn’t have to give her the right words to say. She always spoke as though I was speaking myself.

TS: James Brown was called “The Godfather of Soul,” “Mr. Dynamite” and “The Hardest Working Man in Show business.” What title or song best describes your work ethic?
MN: [She ponders for a moment] The “Greatest Love of All” by Whitney Houston. 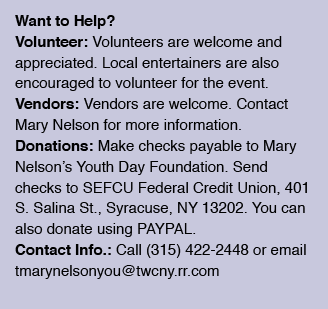 TS: Tell our readers something special about the volunteers  you work with.
MN: [They all have] commitment, dedication and compassion.

TS: This interview will appear in The Stand Newspaper. Please describe an incident where you took a stand on a particular issue. Or, what does Mary Nelson stand for?

MN: My message: “Stay in School.”  Education is a deterrent to violence. If you stay in school, you won’t have time for the violence.

TS: If you were on the front page of the newspaper, what would be the headline?

MN: “Beyond the Dream.” The reason why I say that is because back in 2002, if someone would have told me that this [Mary Nelson Youth BBQ Day] was going to become as big as it is, I would not have believed it. It’s nothing but a dream that I am still living. I’m living “Beyond my Dream.”