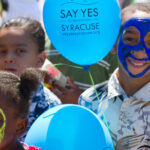 Program aims to help keep talent in Central New York By Darian Stevenson Mentors serve as a source of knowledge and can help set goals and plans for the future. Now some of Syracuse’s own career professionals are setting aside time to serve as mentors to a group of Syracuse City School District students. In collaboration with Believe in Syracuse, ... END_OF_DOCUMENT_TOKEN_TO_BE_REPLACED

June 9, 2011 Comments Off on More Than 300 College Students to Begin Training for Say Yes Summer Camps

More than 300 college students, representing 46 colleges and universities, will be on the Syracuse University campus Monday, June 13, to train as Summer Enrichment Specialists for the 2011 Say Yes to Education Summer Camp. END_OF_DOCUMENT_TOKEN_TO_BE_REPLACED

More than 400 eighth-graders learned about college life and the importance of an education Seventy-five students from the Roberts School, at 715 Glenwood Ave., joined their peers from Frazer and Grant middle schools to spend an April day at Syracuse University. The eighth-graders learned how to be accepted into college and what an education at that level can offer. END_OF_DOCUMENT_TOKEN_TO_BE_REPLACED

Students start with sewing basics and then go on to create projects such as pillows, handbags Say Yes to Education recently started offering sewing classes to elementary school students on the South Side. Staffed by instructors from Peterson Sewing School, 920 Euclid Ave., the classes are for students at Elmwood Elementary and Roberts School. Students can enroll in a free, ... END_OF_DOCUMENT_TOKEN_TO_BE_REPLACED

More than 70 university students attended the Say Yes to Education volunteer meeting held on the evening of Tuesday, Jan. 26, at Syracuse University. The program that offers free college tuition to all students who qualify in the Syracuse City School District is seeking volunteers for its kindergarten through fourth-grade after school programs. “You should never be denied access to ... END_OF_DOCUMENT_TOKEN_TO_BE_REPLACED

September 17, 2009 Comments Off on Say Yes to Gain Donations

August 26, 2009 Comments Off on Reflections From Say Yes to Education Summer Camp