Reflecting on Frederick Douglass’ legacy of fighting for justice

November 28, 2018 Comments Off on Reflecting on Frederick Douglass’ legacy of fighting for justice 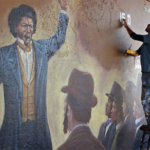 Celebrated abolitionist commemorated by local artist, national newspaper columnist Frederick Douglass, who has been called the greatest American of the 19th century, grew up as a slave named Frederick Bailey. He became a prominent American abolitionist, author and orator. He made several appearances in Syracuse during his lifetime (1818-95). On Nov. 14, 1861, he gave a speech, “The Rebellion: Its ... END_OF_DOCUMENT_TOKEN_TO_BE_REPLACED