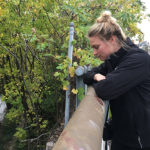 An unlikely friendship opens opportunities for homeless community It’s a cloudy Saturday afternoon as Kate Waltman crosses the intersection of South Clinton and West Onondaga streets. She walks under the overpass where the “Lives Change Here” sign is painted and stops at a bridge. Looking down, she points to a spot below. “That’s where Timmy and I would sometimes meet.” ... END_OF_DOCUMENT_TOKEN_TO_BE_REPLACED

Kevin Frank has been named the executive director of the Brady Faith Center. He will replace the current executive director, David Allen, who will retire from his post after three and a half years of service. Frank, whose appointment is effective May 3, will join Father John Schopfer, Brady’s pastoral director to carry out the mission of serving those in ... END_OF_DOCUMENT_TOKEN_TO_BE_REPLACED