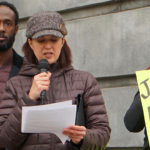 A resolution asking the state to rollback New York State’s latest bail reform passed the Onondaga County Legislature on Feb. 4, despite criticism from local protesters in front of the building.  The resolution, proposed by GOP Legislator David Knapp, will be sent to the state legislature to push forward an attempt at amending or suspending the controversial bail reforms. The ... END_OF_DOCUMENT_TOKEN_TO_BE_REPLACED