To help children deal with bullies, a Roman Catholic elementary school has teamed up with a karate school to offer a weekly program for young boys and girls. The Tuesday afternoon program — called “bully-busting” — is hosted by Most Holy Rosary School, at 1031 Bellevue Ave., in collaboration with Central New York Karate and Kobudo Schools. The program takes place during after-school sessions in the school’s gym.

“Our school has a Catholic identity which transfers into all aspects of our curriculum and extracurriculars,” said Brenda Reichert, the principal. “The program teaches self-discipline and control which benefits our students in and outside of the classroom.”

Karate instructor John Nelson demonstrates how to fend off an attempted choking with John Sheridan, 8, during a class at CNY Karate in East Syracuse. | Jim Tuttle, Staff Photo

The four main facets of the program are: character building; prevention and avoidance; verbal resolution; and protection. Labbate and child psychologists developed the program to ensure students learn how to handle bullying.

“Psychologists train here that are black belts, and over the years they have helped me to formulate a concentrated bully-busting program that has an actual curriculum to build character,” Labbate said. “We don’t expect students to just learn through osmosis, but truly internalize the lessons. We then have students verbalize them back to us and then practice.”

John Nelson, manager of CNY Karate, teaches the Holy Rosary program and has seen a transformation in students.

“The kids at Holy Rosary were terrific to start off. Very behaved. Very polite. But I can see these children growing into confident young people,” Nelson said. 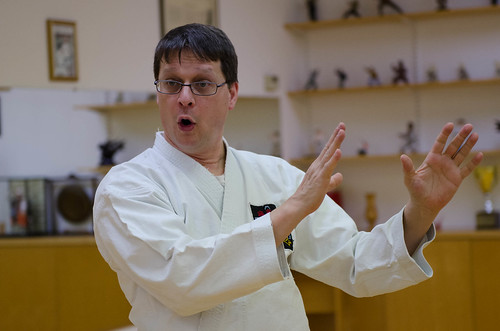 The class lasts 45 minutes and is structured the same each week. Nelson leads the children through a short warm-up, followed by a discussion of a life lesson and how martial arts can be a part of it. Bully busting is the main focus, and a different technique is taught in each class. Students are dismissed after a fun drill that ties the lesson together.

“We start at base level. If someone pushes, they block. If someone grabs, they break the hold. If they have to go to the next level, we do show techniques that cause some discomfort to the bully but couldn’t injure him or her,” Labbate said.

“Our hope is that children gain the self-confidence so they don’t become a target of bullying and are able to stand up to bullies and help other children,” Nelson said. “If they need these techniques, they’ll have them.”

Steve and Margaret Sheridan enrolled their three children in the Holy Rosary karate after-school program. The sons, Christopher, 11, and John, 8, have begun to take additional classes at CNY Karate during the week, as well as a program taught by CNY Karate at St. Luke’s  Episcopal Church, 5402 W. Genesee St. Evelina, John’s twin, continues to attend the after-school program.

“My wife and I thought it would help our children gain confidence in themselves and enrolled them in the Holy Rosary program a couple years ago,” Steve Sheridan said. “Our boys really look forward to it and were invited to join a tournament team.”

He added: “CNY teaches a great bully-busting program which, I think, calms children down and gives them the confidence to handle different situations.”

The Sheridans have seen the biggest change in Christopher. His confidence and listening skills have improved, and he has become more focused, Sheridan said. 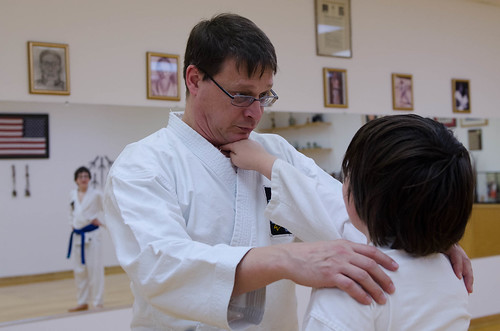 John Sheridan, 8, of Strathmore, practices fending off an attacker during a demonstration with instructor John Nelson at CNY Karate in East Syracuse. | Jim Tuttle, Staff Photo

“When the boys do drills, it’s light contact, and they don’t allow my sons to spar against each other because it’s much easier to escalate between two brothers,” Sheridan added with a chuckle.

Labbate’s program has set out to disprove that karate is violent. CNY Karate improves students’ balance, speed and agility through martial arts, and Labbate teaches students to avoid confrontation first.

“We want to improve the student as a human being. These are the young people that will become future productive members of society, and we simply use martial arts as a vehicle to do so,” Labbate said.