Late on a Monday night in January you could hear the laughter coming from inside the foyer of a church on South Salina Street.

“I love my mommy!” shouted a 6-year-old with a smile from ear to ear. “She’s going to graduate and go to second grade!”

All of the adults chuckled, and so did the girl’s mother as she held back her tears. The puzzled child froze with a shocked look on her face.

“Isn’t she going to second grade?” she asked. 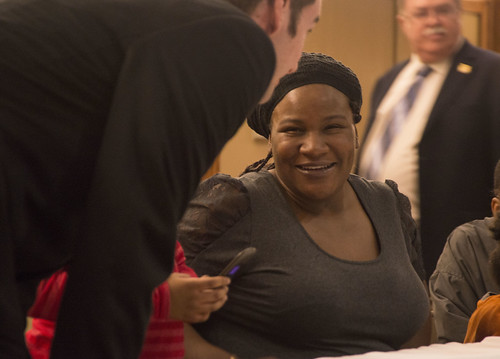 Tisha Joyner says thank you to Pastor Taylor Gordon for the support she received for completing the Jobs for Life program at the Reformed Presbyterian Church in Syracuse. Joyner, a mother of four children, said she plans to become a nurse one day. | Mark Logico, Staff Photo

She didn’t understand what her mom was going through, what obstacles she had to overcome, and what still was ahead — but she knew how she felt about it all.

“I’m proud of her, I love my mommy.” And with that, she skipped into her mother’s arms for a hug. Her 3-year-old younger brother trailed behind.

Clentisha Joyner was heading out of her last class session before graduating from the Jobs for Life program at the Reformed Presbyterian Church.

Jobs for Life is a 16-week program that began in October. It aims to help unemployed and underemployed people through mentorship, skills training and spiritual motivation. The course consisted of classes that targeted resumes, skill assessments, applications, conflict resolution and evaluations. But interlaced with the curriculum of Week 13 — titled “How Do I know I am Going in the Right Direction?” — was a study of the life of Joseph from the Bible. Other lessons intertwined the stories of David, Jonah and Noah.

“We aren’t Bible bashing, but we don’t hide who we are,” said Taylor Gordon, the student relation leader and a teacher in the program. “We’re going to teach you job skills that we think are going to be character-building.”

On Feb. 11, three students became the first graduating class from the program. Among them was Gordon’s mentee, Joyner.

“Without schooling and education, it does take a while to actually get that good job you need,” she said. “In high school and growing up, I wasn’t able to do presentations in front of a large crowd and I’m actually good at it now and it’s going to help me in the work field.”

But more than preparation for a job, Joyner points to her spiritual growth as well.

“Along the way of this journey, God is always here so it’s definitely a good place to be and learn about your life.” 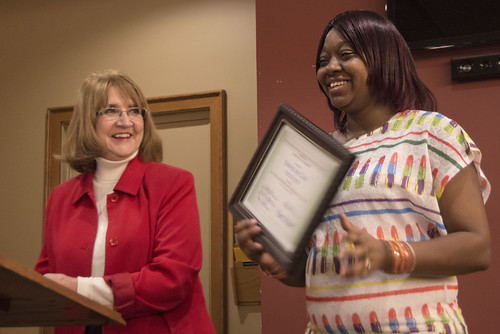 Saleina McClain receives her certificate of completion as she graduates from the Jobs for Life program at the Reformed Presbyterian Church in Syracuse. McClain plans to become a physical therapist. | Mark Logico, Staff Photo

Joyner invited her friend Saleina McClain to go through the program with her, and both women — who dropped out of high school years ago — were able to graduate together. McClain said she’s glad she followed through in a program with a faith center.

Joyner is, too. “I could be somewhere better than I thought I was and it showed me to trust in God and let him lead the way and you can make it anywhere if you ask God to help,” Joyner said. “It (Jobs for Life) plants it in you and just going out there trying they don’t teach you the stuff that they taught you here.”

According to the National Center for Education Statistics, more than 3 million students drop out of public schooling each year across the country, more than 180,000 of them in the state of New York.

McClain vividly recalls her decision to drop out of school. She was 18 and in the 10th grade. She knew she was behind, and so did her teacher, but not the rest of her class.

“Then one day he broadcasted that to the whole class,” McClain said. Embarrassed and humiliated, she started skipping school. It was only a matter of time before she stopped going. 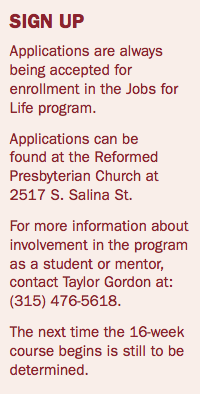 When the Jobs for Life program began, there were eight people enrolled, but five dropped out during the course. While some left because they were able to find a job, others just weren’t committed. Gordon said he’s always accepting applications and rarely turns down someone who genuinely shows interest.

“I’m just looking at the application to see that they’re trying and that they care,” he said. “We want to meet students where they are and develop them as people. It’s a classroom program, but it’s also about mentorship.”

At the end of their last class meeting, pizza was served for the students and mentors. As Joyner smiled and said, “I’m graduating,” Gordon was right across the end of the table cheering her along.

“I very rarely depend on people,” Joyner said. “I like to do it myself unless I’m to the point that I can’t do it all. I’d like to teach my kids there’s nothing wrong with asking for help.”

The following Monday, with her two children and mentor encouraging her, Joyner graduated. “I’m always looking forward to something new that’s happening,” Joyner said. Next, she wants to conquer her GED.