From the wood-framed window of his office on the second floor, pastor Daren Jaime looks down on the 2300 block of South Salina Street. The cracked pavement that used to bear crack pipes and the trailing footsteps of prostitutes, now paves the way for small business owners with an added interest to invest in their community.

To credit the five-year evolution, most people will point to the old stone building of the People’s A.M.E. Zion Church. Those in the church will point to one man, Pastor Jaime, who in turn points up to give credit to God.

“I acquired a heart and a passion for people and community,” Jaime said. “God basically told me this is what he wanted me to do.” 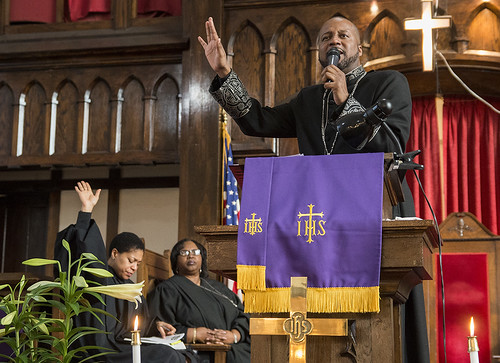 Pastor Daren Jaime with the People’s A.M.E. Zion Church, located across the street from recent renovations along the 2300 block of South Salina Street, has been instrumental in the block’s improvements. | Mark Logico, Staff Photo

Since the diocese moved the business-oriented pastor to Syracuse, he’s done more than just deliver sermons behind the pulpit. Jaime gave up his career in journalism to focus on ministry but still hosts a two-hour, community-oriented radio talk show each Saturday on Power AM 620. And the Harlem native flies back to host two television shows each week in the Bronx — an hour-long, live call-in show, and a 30-minute show that focuses on issues in the African-American community and current events.

He said he just likes to stay busy, but his media presence also helps him and the church stay relevant, even among those who don’t know about the church ministries. In just a few weeks, famed gospel singer and minister Donnie McClurkin will worship and deliver the message at the church revival. 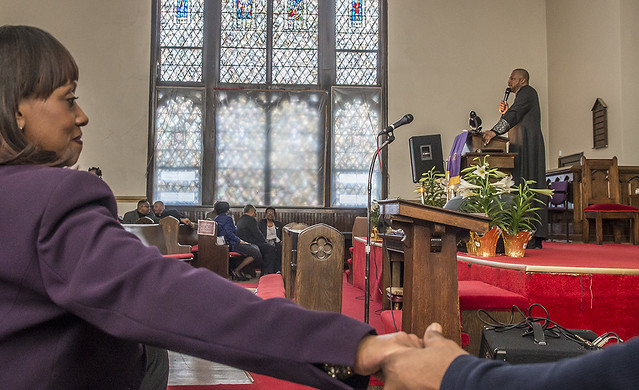 Jaime is also a member of the trauma response team that partners with the Syracuse Police Department; is
on the board for Southeast Gateway, which deals with housing on the South Side; and works with Reach CNY, which is involved with infant mortality. He emphasized that his work is about shifting the mentality of church beyond its four walls.

“When people start to see that outside we’re engaged and we’re active and trying to make a difference, I think that was the catalyst,” he said. “And I believe we preach a relevant message to people in a way that they can understand it.”

The church itself also has plans for expansion and business ventures. Jaime recently unveiled to the congregation Project Save 711. It represents 711 E. Fayette St., one of the last remaining buildings from the historical Fifteenth Ward and the former house of worship for the church, which is the oldest African-American congregation in the city. Jaime wants to turn it into a community café and a place where people can learn culinary skills.

All are ideas that have the support of Gwen Fagan, who has been a member of the church since 1998, which was 10 years before Jaime moved to Syracuse.

“Some people didn’t like it, and I’m quite sure some of those people just like to sit and wait and see,” she said. “But now they’re like ‘Ohhh’ and they’ve jumped on the bandwagon.” 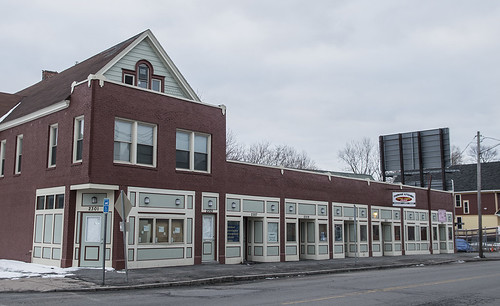 Fagan was laid off and finishing work on her M.B.A. Then she received what she can only describe as a vision from God when she had a dream of walking into a clothing store and asked for Mrs. Fagan. It was herself who walked out, and when she woke up, she was told to call it Suit “U” Now. Jaime encouraged her to pursue it.

“So I took my 401K and opened this shop with no loans, no nothing,” she said. “Saturday it’ll be two years since then.”

Her business is located across the street from the church in the newly renovated strip of businesses built with grant money under Jaime’s leadership. Fagan said she’s not getting rich, but business is stable and she loves not having to report to anyone else. She doesn’t see the same people that used to walk the street, but knows they probably still come at out night because every now and then she’ll see a beer bottle in front of her store or one nearby.

“This was a leap of faith,” Fagan said when explaining how much more it meant to her to have a business in conjunction with the church. “And he [Jaime] was instrumental in it.”

And the list of Jaime fans doesn’t stop with his flock.

“He’s got star power,” said Timothy Jennings-Bey, better known as “Noble,” director of the trauma response team and leader at the Southwest Community Center. “People feel like they know you but never met you … and you can’t teach that, that’s a gift.”

Noble explained that the trauma response team partners with the Syracuse Police Department to meet on the scene of shootings and other traumatic events primarily located on the South Side, to serve as a liaison between the police and the families involved. While Noble said he invited other pastors from the South Side to join in the initiative, Jaime was the only one to follow through, and he does so with consistency.

“I remember the worst incident we responded to when a baby was killed and Pastor Jaime was like an alligator in a swamp,” Noble said. “Everyone was on high alert, it was chaotic.” 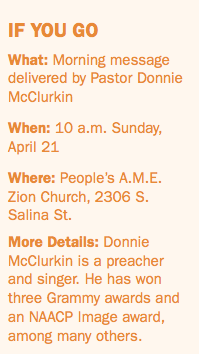 That response was the November 2010 gang shooting that killed 20-month-old Rashaad Walker Jr. when he was sitting in his car seat in a minivan on Coolidge Avenue. Noble said the baby’s father grew up going to the community center, so losing the baby was like losing his nephew.

“I got to a point where I couldn’t go any further, that was it,” he said. “But pastor went above and beyond that so even though I’m the director of trauma response, to have someone like that, that’s willing to go that length speaks volumes.”

Jaime also recalled the horrific night and said it was one of his hardest. One of the most difficult moments for the church was being the constant victim of burglary. About two years ago, someone stole around $10,000 worth of audio equipment. And before a full recovery, the church was burglarized again, but the second time people from the church investigated and caught up with one of the thieves.

“And after he turned himself in to the police, of course they charged him, but I promised him, I said if you would help me get all my stuff back, because it was him and three people involved, I would work very leniently with you,” Jaime said. 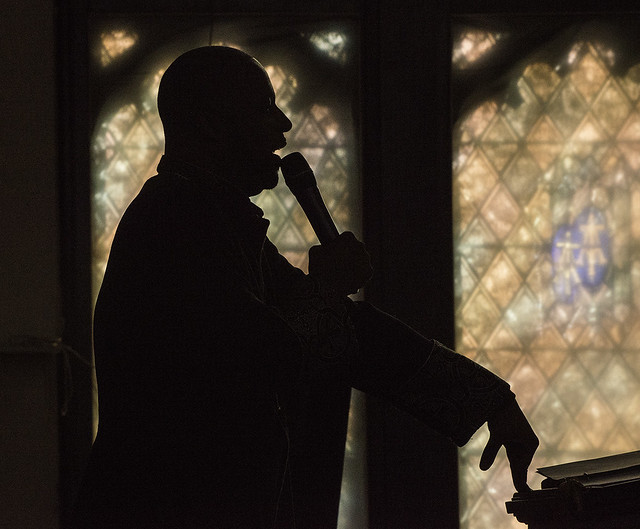 Jaime went to court with the young man, who ended up being released on probation under the pastor. While Jaime describes it as one of the most painful times for the church, he said God was able to turn it around for the good. The young man eventually joined the church and was active in the audio/video ministry there.

“He comes by here now frequently and nobody’s scared, he’s accepted as part of the family,” Jaime said.

Noble says Jaime is “the new breed from that old- style preaching,” describing him this way: “He doesn’t have a four-wall ministry. He brings the principles that Jesus came to teach, outside, and he put it in the streets.”

Pastor Tony Roach of the Minda Street Church of Christ in Abilene, Texas, has a radio talk show and even competed in a reality television show on Oprah’s OWN network. He, too, has a strong media presence and has expanded his congregation’s initiatives beyond the church walls.

“Christianity in discipleship and discipleship doesn’t occur in the four walls of a church building,” Roach said of outreach such as Jaime’s. “Discipleship occurs in the lives of people they do business with on a day-to-day basis.”

The people that Jaime does business with on a daily basis have helped increase the size of his flock. Fagan described the church a few years ago as only having a few dozen people scattered through the pews. Now, the church has about 500 members and standing-room-only on some Sundays.

During the 11 a.m. service, the parking lot is full and cars line the street. You can hear the choir singing from outside the church walls. And as for Jaime, “to God be the glory.”