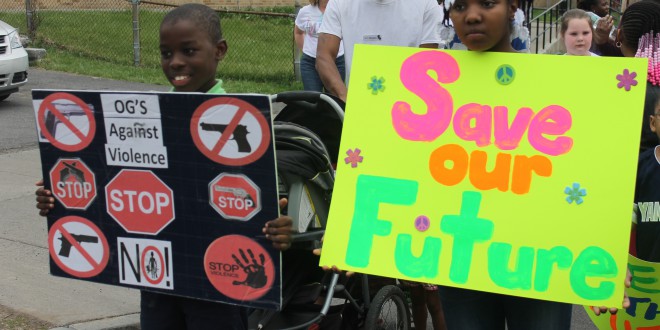 First of many events organized to address impact of community violence

Students and teachers at the Head Start Merrick School held a neighborhood march on Thursday afternoon, April 21, to protest violence in the area. 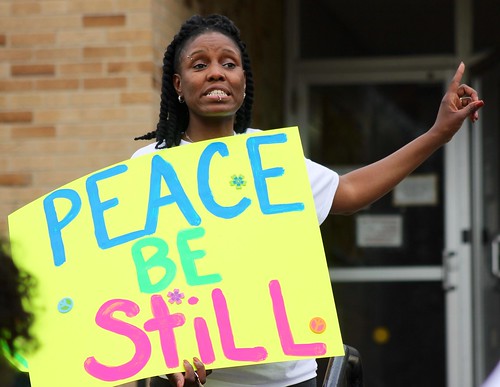 Shaundeese Jones helped to organize the march. She wanted to do something to help after her son was shot and injured late last year.

Merrick family worker Kerry Madison worked with Shaundeese Jones to plan the rally during the center’s annual “Men in the Lives of Kids” celebration. Jones, a grandparent of two children in the Head Start program, said she got the idea for a march in November when her son was shot and injured.

Jones said it’s imperative for the community to get involved to stop street violence from the time children are young.

“We start at Head Start because this is the beginning – they still have to get to 12th grade,” Jones said. “These babies have to grow up.” 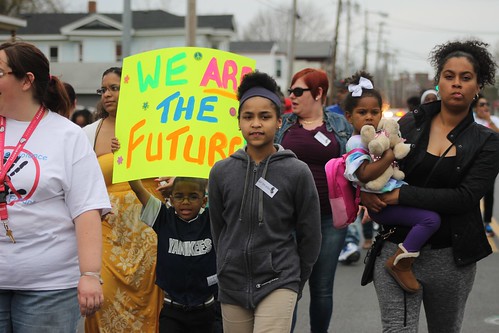 Head Start is a federally-funded program to enhance school readiness for children younger than five from low-income backgrounds in order to offset achievement gaps that are in place by the time they enter kindergarten. There are six Head Start centers in the city of Syracuse. The Merrick center, at 175 Hudson St., takes children from 6 weeks to 4 years old.

Madison said that some of the children at Merrick have been affected by the violence directly because someone in their family has been shot or killed. Even indirectly, she said, there have been ripple effects. The children used to go outside and walk around the block, but they don’t do that anymore because of the risk of violence.

Just last week, a 17-year-old was shot near the school, at the intersection of South Avenue and Tallman Street around 5 p.m.

Jones said that this march would just be the beginning, and they would continue throughout the summer.

Madison and Jones invited community leaders to speak about the importance of ending the shootings: Timothy Jennings-Bey, the director of the Trauma Response Team; Ed Mitchell, the founder of Team ANGEL, and Lepa Jones, the president of Mothers Against Gun Violence.

“It’s very important that we do this and show you that somebody in the community does care,” Jennings-Bey said. “Because with the level of violence that’s been going on in our communities, people start to lose hope.” 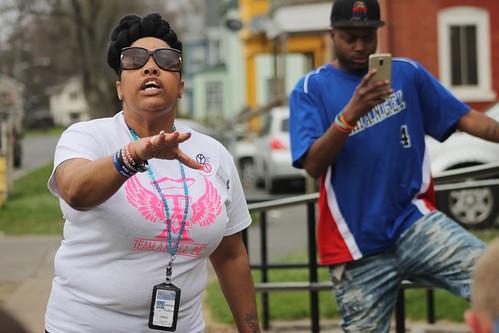 Lepa Jones, president of Mothers Against Gun Violence, speaks to students and teachers of the Head Start program at the end of the march

Clifford Ryan, the founder of OGs Against Violence, joined the group during the march around the block. Children, families, teachers and community activists followed behind a Syracuse police escort and chanted phrases such as: “Stop the violence” and “We are the future.” They wore pins and T-shirts also adorned with the phrases.

At the end of the march, Lepa Jones spoke about the importance of parents inviting positive influence into their children’s lives. She added that her work, and her organization’s work, doesn’t stop until there are no more shootings.

— Article and photos by Ashley McBride, The Stand’s staff reporter 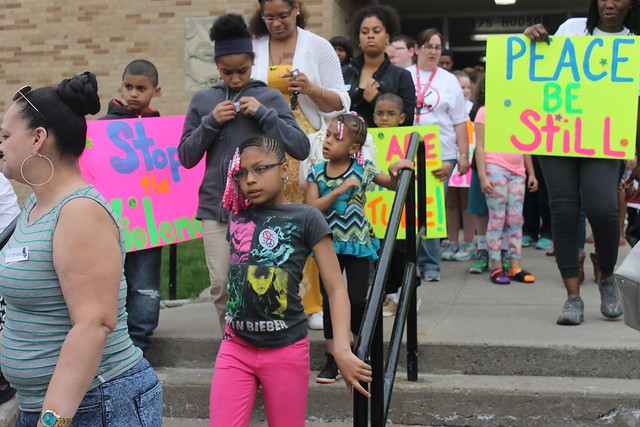