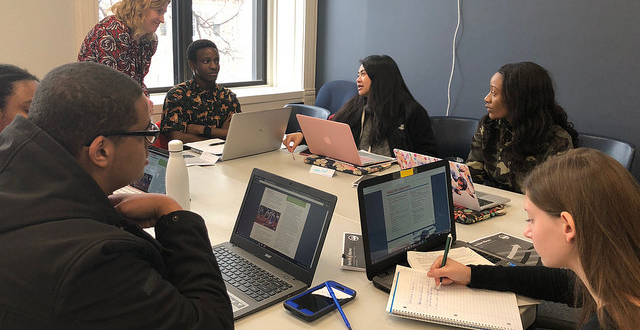 The members of the Youth Advisory Council have brought up numerous concerns they have about Syracuse, including crime, poverty and the quality of education.

Back in December 2016, a couple of influential Syracuse Common Councilors put their efforts behind a new idea to help reinvigorate the city — create a forum in which a diverse group of thoughtful adolescents could learn from and talk with city officials. Since then, the Youth Advisory Council has been created, with 16 teens, ages 14 to 19, from public and private schools throughout the city.

Councilor Susan Boyle sees the benefits as running two ways, with the teens learning about the city’s operations, while city officials become familiar with the hopes and fears of Syracuse’s youngest generation. Boyle, councilor for District 3 and chair of the council’s Education and Human Development Committee, says politicians and government officials can gain a new understanding of how the legislature in the city can affect this demographic.

“My role is to open the doors of City Hall to the kids,” Boyle said in a telephone interview. “The goal is to engage these kids about current events in our city and make sure they understand how everything works, what their role is and what their role can be.”

In interviews, the current students on the advisory council spoke of concerns they have for the city.

Corcoran High School sophomore Anahja DeLee says the most pressing issue in Syracuse ultimately stems from a lack of humanity and understanding among its citizens. DeLee says this makes the life of lawmakers and local government officials more difficult.

“I say there is not enough compassion in the city,” DeLee said in a phone interview. “I think the problem is really among the people, and this makes it harder on congressmen and women when people aren’t willing to cooperate.”

The Youth Advisory Council, which is intended to facilitate cooperation and conversation among Syracuse residents, is run by Eleanor Leach, a Syracuse City School District educator in the curriculum and instruction department, and Nick Stamoulacatos, supervisor of social studies for SCSD.

“Right now, among our youth, there is a sense of hopelessness on national levels, state levels and local levels,” Stamoulacatos said. “On the local level, they seem to feel a little more informed because it seems that this new administration is communicating a little bit more with this generation.”

The Syracuse Common Council funds the advisory council. The focus on local issues includes finding ways to improve education and to create more opportunities for economic growth and development. The student members also research ways to create more positive spaces for younger Syracuse residents. The idea is to make the city an attractive and safe place to live.

Dominique Donnay, a sophomore at the Institute of Technology at Syracuse Central, says the council is a way for Syracuse high school students to pinpoint the issues that affect them and come up with solutions. 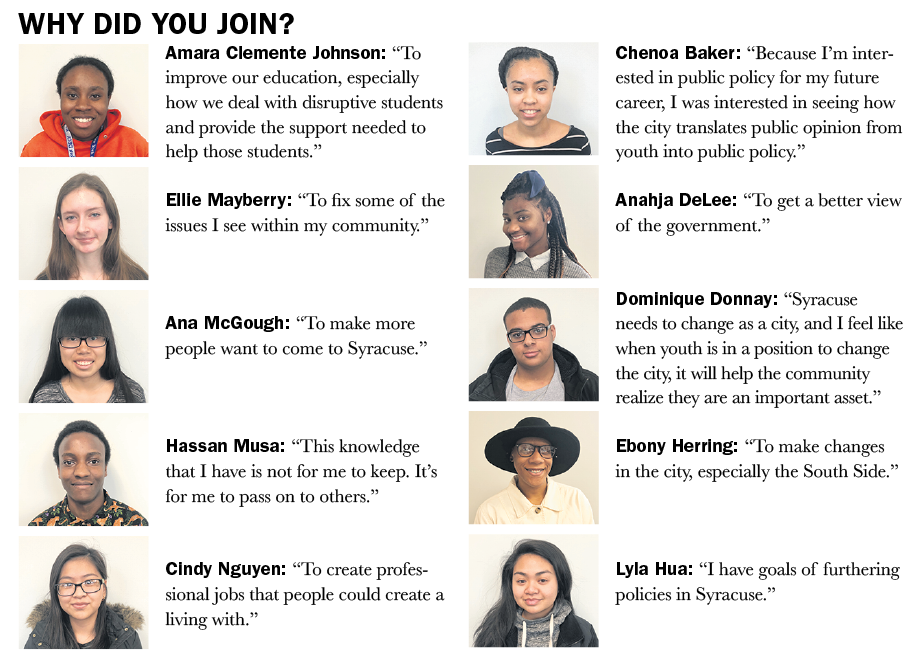 Homicide is still a fear among many of Syracuse’s young residents even though it has declined, Donnay said.

“I know everybody has their own reason for wanting things to be different, but I think the main one is that they’d like to see Syracuse become a better city,” Donnay said. “I think they’d like to see the violence that happens decrease to where we don’t have to worry about getting injured or assaulted just by walking out the door.”

During their first three meetings, the students on the council have had the opportunity to discuss the issues that plague every sector of the city. At their last council meeting, they discussed their concerns with Mayor Ben Walsh in City Hall. Walsh welcomed their perspectives and assured the students of his support.

These students already have begun to immerse themselves in the political process with the help of their advisers. Among the issues: Syracuse city schools; parks and recreational centers; increased crime and poverty rates; and snow removal.

The Youth Advisory Council lasts the duration of the academic school year. Then the students are expected to complete a multimedia capstone project as a team by conducting research on local issues and each contributing a portion of the project.

Madison Prowak, a junior at Bishop Ludden Junior-Senior High School, is one of the 11 members and five alternates on the council. Prowak stressed the importance of the council in giving younger Syracuse residents insights into career fields and helping them learn what they can do to make a difference.

“Syracuse is in a stage of transformation,” Prowak said. “I want to know how much we can do. I think we have a lot of potential because we are the next generation, and our voices are important.”

— Article and photos by Ivana Pino, The Stand staff reporter