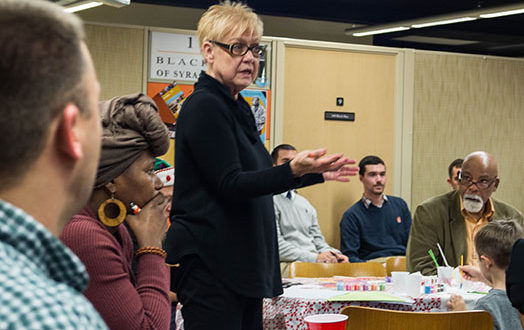 Jean Kessner, Common Councilor at-large, is pushing to form a Youth Advisory Council. Teens in the group would advise the Syracuse Common Council on local legislation and its impact on young adults. | File Photo

The city of Syracuse has its sights set on the future, as it is about to select members of its first Youth Advisory Council to aid the Syracuse Common Council.

A council of this type has not been tried before in Syracuse. The group of young people is meant to establish a method of communication between the city government and the underrepresented youth.

The council will be made up of 11 members, ages 14 to 19, with five alternates. Members of the youth council do not have to attend Syracuse city schools, but must be in ninth through 12th grade and live within the city limits. The council is not officially affiliated with the Syracuse City School District.

Tracy Jackson, the supervisor of counseling and guidance services with the Syracuse City School District, said the Youth Advisory Council will be able to give significant input to the Common Council.

“They’ll sit in meetings. They’ll get to work on different projects,” Jackson said. “They would have the opportunity to have a say on different issues.”

Jean Kessner, an at-large councilor, said that until now, the municipal government has not been able to take the pulse on the young people.

For example, Kessner said that the city spent considerable money on parks, but wasn’t sure how youth wanted that money to be spent. “Would they rather have a basketball court or a tennis court? We don’t ask them,” she said. “So, how do they come up with these ideas?”

Youth will take turns on the council, with each member serving one school semester. That way, Common Council members said, the process will maximize the number of younger voices the Common Council hears. Jackson said the members will do more than just give their opinion to the Common Council. They will immerse themselves in the different processes needed to run the local government.

“They’ll learn in the process how you will go about writing legislation,” she said, adding that members would learn “how you go about lobbying to get enough people to agree to pass it. So, it’s basically a hands-on civics lesson.”

Kessner said she hopes the insights picked up by young people will be able to eventually shape policy that governs the entire city. From issues like speed bumps on streets, to body cameras worn by city police officers, the formation of the Youth Advisory Council will ask young people to help shape the laws of the city for years to come.

The Youth Advisory Council is also seen as a potential source of ideas going forward.

“We don’t have to adopt any recommendations they might have. We might say, ‘Wow, that’s a great idea, we didn’t think of that,’’’ Kessner said. “But there’s a reality of being able to pay for what we say we want to do, and where do we find the money, how do you raise it,” she stressed. “There’s a lot of things they can learn, and it just remains to be seen what it is they come up with.”

If you are interested in becoming a member of the Youth Advisory Council, you must apply. Find the online application here or, for a paper copy, call (315) 448-8466.

Next, complete the application and submit by email to jconroy@syrgov.net or mail to:
Syracuse Common Council, Room 314 City Hall, 233 Washington St., Syracuse, NY 13202