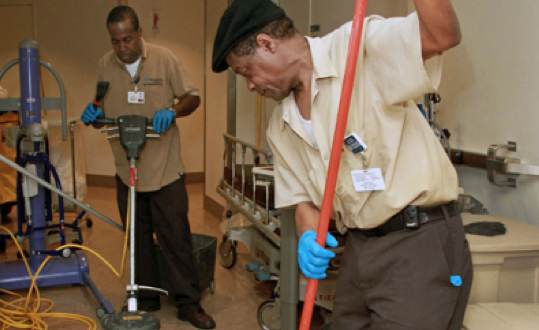 Because people spend so much of their time at work, it is important to become aware of the ways that work impacts health. Low-wage jobs have become essential to our economy. Low paying, unstable work arrangements have created large numbers of workers with high risks of poor health due to hazardous health and safety conditions, the lack of a living wage, the potential for wage theft, the lack of union representation and discrimination. 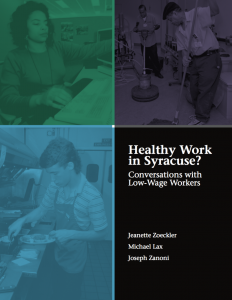 There have always been dangerous and stressful work conditions, but historically, workers in difficult settings were frequently paid higher wages and benefits to compensate for the danger. Under these conditions workers in low wage jobs find it increasingly difficult to make a “decent living” under healthy conditions.
Because these striking national trends are also likely locally, the Low-Wage Workers’ Health Project sought to characterize local low-wage workplace conditions and some of their potential impacts on worker health with an aim toward developing ideas and strategies for improving working conditions. The Project is a collaboration based at the Occupational Health Clinical Center in Syracuse.

More than 569 low-wage workers in Syracuse have described their working lives through surveys and focus groups conducted in the past three years.

What can we learn from low-wage workers?
A living wage is the minimum income necessary to meet basic needs without resorting to any type of assistance. Low-paying jobs serve many important and essential functions in our society, yet these jobs don’t offer a living wage. Occupations include cleaning, cooking, bus driving, painting, building, processing products or managing the personal care of the elderly or very young.

Employment for those who earn low wages is “precarious.” This means that the work is not steady and is likely to change due to circumstances beyond the workers’ control. Most low-wage jobs held by the workers we encountered did not provide a long-term occupational path or medical benefits. The majority have been in their current jobs for less than two years. One-third predicts their current job would not last six months.

More than 30 percent of low-wage workers we surveyed experience physical symptoms as a result of their work. This represents thousands of workers in Syracuse alone.

When asked if there was one thing they could change about their jobs, low-wage workers simply wanted to experience less disrespect. Being treated poorly felt like an assault to their human dignity. Workers were often called names, yelled at, or ignored. This was deemed particularly hard when the job just didn’t pay enough “for so much trouble.” Many working adults were particularly frustrated and afraid that they might never gain financial stability, especially because better jobs with adequate wages and benefits were so difficult to find. In fact, they sensed they were losing ground all the time, slipping behind.

Unsafe workplace conditions
Low-wage workers told us about numerous concerns regarding the health and safety of their workplaces. Some workers were frustrated because workplace conditions could be easily cleaned up with very basic changes made by employers, but employers were not taking care of these basics. For example, when workers experienced poor air quality from moldy, dusty, dirty, smelly or stuffy conditions, they could not get even the most basic ventilation solution in place. In these cases, improvement might be quick, effective and not terribly difficult to undertake, but nothing was being done.

Workers sometimes reported more troubling dangers such as being required to use seriously compromised equipment. These workers were stymied about what could be done about these life threatening circumstances as they could not imagine an easy fix. Workers in these situations were demoralized because they were told there was no recourse or even a future plan for repairs. 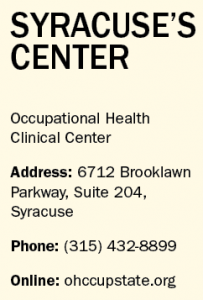 Understaffing is yet another very common frustration and leads to dangerous conditions because more work must be done by fewer employees. For example, many health care aides describe difficulties with lifting patients. Certified Nursing Assistants found it quite “ironic” that while there was a grand push for “safe patient handling” so that workers and patients alike can be safer, their everyday experience was that “safe patient handling” was impossible. Similarly, warehouse workers were faced with conditions promoting unsafe practices and few workarounds for the problem of understaffing.

Patterns of physical suffering on the job varied according to occupation. Restaurant workers describe fast-paced work on slippery floors. Cooks expect to endure a number of cuts, scrapes and first-, second-and even occasional third-degree burns. Dishwashers face back pain and skin irritation. Wait staff expect to have their schedules change at a moment’s notice, have concerns about losing out on tips, and about having to hustle too hard to provide good customer service in a constant environment of understaffing.

Office workers reported physical hazards, such as long periods of sitting and stress from issues involving increasing pressure from management to produce more with less. Surviving office politics, workplace bullying and disgruntled customers were paramount in their minds; they reported having difficulty getting these problems off their minds when not at work.

Ultimately, if the difficult working conditions are not changed or avoided, physical symptoms described by low-wage workers will take their toll. For some workers, occupational health illnesses will develop and may lead to long-term battles with serious health conditions, chronic pain and possibly even permanent disability. Mental health is also commonly affected. The troubling work conditions and stressors associated with low-wage work can trigger new health conditions or aggravate existing health conditions. Respiratory disease, skin disorders, hearing impairment, musculo-skeletal problems, or even cancer can emerge, depending on work conditions.

Connecting the relationship between the symptoms and conditions on the job can be challenging and require the help of an occupational medicine specialist. The health implications of work-related illness can be serious for any working person, but low-wage workers face additional threats to their wellbeing.

For more information, e-mail Jeanette Zoeckler at zoecklej@upstate.edu
This article is adapted from two longer reports