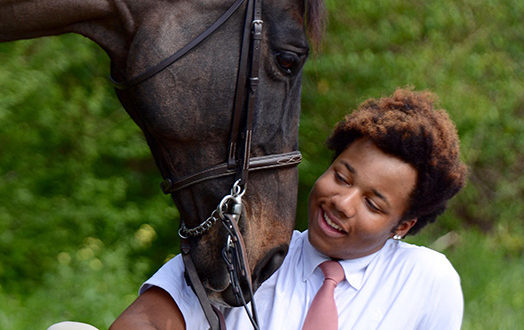 Jovan Daniel spends time with one of his horses outside of training at St. Andrews University. | Provided Photo

Jovan Daniel has felt drawn to horses since he first saw a group of them being fed and groomed on a University of Minnesota campus some 20 years back. His mother, Roshana Daniel, was studying for a degree in psychology. He was barely beyond kindergarten, but so clearly fascinated with the sleek, muscular animals that the college caretakers allowed him into the barn for a closer look. 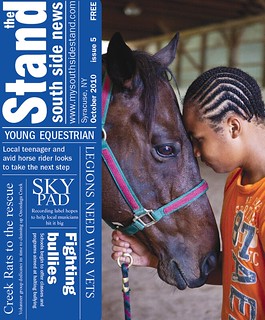 These days, he is the one in college, where he rides and cares for horses as part of his studies.

“She thought it was a phase,” Daniel said, referring to his mother, in a recent interview. “But I was immediately hooked.”

By the time he reached middle school, he found out a person could train as an equestrian in college. He saw his life’s goal laid out in front of him. “It was pretty much a wrap at that point,” he said.

Where did Daniel’s interest come from?

“I don’t have a horse background,” Roshana Daniel said. “I’m not such a lover of animals, so he really had a huge learning curve.”
Still, her son’s fascination may be natural.

“I tell people that it kind of skipped a generation because my grandmother is from a farm,” she said.

As a toddler, Daniel did not care much for cartoons on television. He preferred watching nature programs. When he was young, he fantasized about turning into a horse and then gravitated to wanting to be a jockey, his mother said.

After he outgrew the average height and weight of jockeys, Daniel’s mother encouraged him to do more volunteer work and less riding. She said she hoped to direct him in a path that didn’t include as much riding.

“I thought for sure this is going to knock that right out,” she said. “But he just grew to love it even more.”

The two moved to Chicago, Roshana Daniel’s hometown, after she graduated from the University of Minnesota. When Daniel was 8 years old, they moved from Chicago to the South Side of Syracuse. That’s where Roshana Daniel’s sister lived with her own 8-year-old son. They lived there until Daniel was in high school.

Daniel would wake up at 5 or 6 a.m. during the summer to take the city bus to do volunteer work at a couple of barns near Syracuse, his mother said. She met a bus driver a couple of months ago who remembered her son, saying he used to drive him to the barn where he volunteered each morning.

“He wanted to know how he’s doing and if he’s still riding,” she said. “It really does take a village. It was a community effort. Everyone helped because I couldn’t always do everything.”

After graduating from Corcoran High School, Daniel started college at Morrisville State College. Three years later, he decided to take a year off — from 2014 to 2015 — to work as an intern for a horse trainer at a sales barn in New Jersey. He also had an apprenticeship with the trainer in Florida.

He then transferred to St. Andrews University, in Laurinburg, North Carolina, where he plans to graduate in May 2018 with a bachelor of arts in equine business management and a concentration in equestrian riding.

While he doesn’t own a horse, he rides customers’ horses in each horse’s discipline. At school, he said, there are horses that come from all walks of life, which “helps us riders become more versatile.”

Daniel’s goal is to become a professional rider who is a world-renowned jumper rider. He eventually wants to be a part of the U.S. Olympic Show Jumping Team.

“I see it as a job that I completely love that doesn’t seem like work,” he said. “So why not get paid to do something you love doing?”

His mother said she thinks people really gravitated to her son when he was growing up and enjoyed having him around because he opened up a door that they didn’t know existed.

“They really pushed and encouraged him because he was kind of a unicorn in our community, so to speak,” she said. “Even now people are asking, ‘How are you doing with those horses?’ when he comes home.”

She said as a child, her son didn’t see black men on horses. Even now, she said not that many people of color are in the professional level of riding he wants to do. He gives kids the courage “to be OK being the only one, which is tough,” she said. 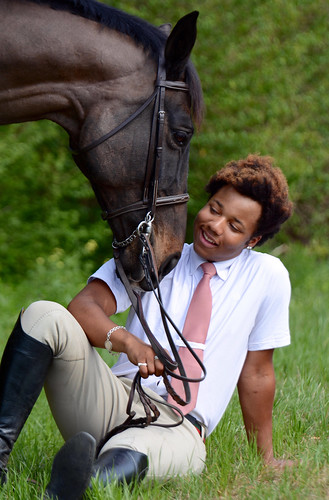 Roshana Daniel said class and economic differences are what her son struggled with more than anything growing up. He had to work hard for the things that people he knew were being given so easily.

Coming from the South Side, she often was asked by people how she pushed her son to go to school and study. She said she tried to encourage and develop his interests. She also wants parents to know that doing that on any level is important because parents never know where that’s going to take them.

Emily Szabo is the barn operator at Cedar View Farm in Cazenovia. Three years ago, when she met Daniel, she put him on higher-end horses, jumpers and difficult ones. She said he takes the time to see what upsets them and what can make them the best they can be.

Tharyn French, a teammate at St. Andrews University, describes him this way: “Jovan is bold, confident and eccentric. That’s also his riding style.” She added that she thinks he has matured a lot and has become a strong rider in the past year.

French said that he has been there for her almost every step of the way in the past year.

“Jovan always has my back, which is pretty hard to find,” she said.

Roshana Daniel said that at the schools her son has attended, he has been the first or the only riding student that she knows of who is a black male. She thinks it’s great that it doesn’t faze him that he may be the only black male at his college.

“I talk to him about that stuff because sometimes it’s good to see people like you,” she said. “But it’s really telling of the places and friends he’s around because it’s not a big deal. Those things kind of disappear after you get to know someone.”

— By Katelyn Faubel, The Stand reporter