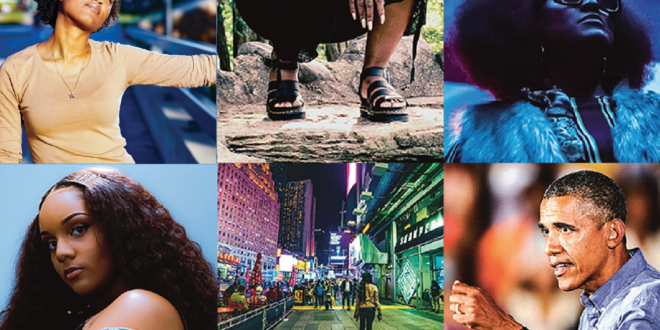 Eurain Scott has shot countless images in the last four years including of former President Barack Obama. | All images by Eurain Scott

Eurain Scott broke his $2,400 camera lens the day he set up his new tripod. The 22-year-old photographer knew he had to take action. He is almost never without his camera.

“I’ve sacrificed so much to get that lens,” Scott said. “And after that broke I was like, ‘Oh no. I need to do something about this.’ I made a few calls and I started a new job today in construction.”

To some, physical labor may seem like a lot of work to replace a camera lens. This was never a question for the Syracuse resident, who found his love of photography five years ago.

“Every opportunity that I had with Eurain to offer him, he took full advantage of it,” Lisi said. “Not that he was great at every one right away, but he was never afraid to try. He was never shy about failing and taking criticism in a way that would make his work better.”

Some of the opportunities Lisi helped Scott obtain included a freelance contract with Syracuse.com, in which Scott took photos at all his high school football team’s games, and an opportunity to photograph former President Barack Obama when he came to speak at Henninger High School, Scott said.

Scott demonstrated a willingness to learn and a passion for his work, Lisi added.

“He was never the type of student that would shut down and give up and that’s amazing,” Lisi said.

After his senior year in high school, Scott said he participated in The Stand’s summer storytelling series, “From Where We Stand,” in which he documented his summer through photographs. He then attended Onondaga Community College to study electronic media communication, before deciding that he didn’t want to continue his studies.

“Everybody has their own different perception of what success looks like,” Scott said. “I felt like I could’ve found success a different way.”

Abeer Alziadi said she met Scott because they were both participants in the Educational Opportunity Program, which helps students with economic or academic disadvantages. Alziadi said some of her fondest memories with Scott at OCC were when she would stay on campus late doing work, and Scott would walk her to her car, even if he finished his work earlier, to make sure she got home safely.

“He never had to stay that long,” Alziadi said. “He could’ve went home and went to sleep. Sometimes he used to fall asleep in there waiting for me to get my work done.” Alziadi said Scott would sometimes use his time in the office to work on photography projects. In addition to a job at Best Buy, Scott said he supports himself through his commissioned work, including portraiture and videography.

Scott added that he continues to develop his photography style over time.

“You can tell he’s passionate about it because he spends endless hours editing and I don’t even see him anymore because he’s always working on projects like that,” Alziadi said.

Alziadi said she and Scott participated in many conversations and debates about social issues such as culture and religion in the Educational Opportunity Program’s office space.

“He speaks his mind and he uses it carefully but he makes sure he gets his point across,” Alziadi said. “He’s not afraid to voice his opinions.”

Scott demonstrated an interest in debate and social issues when he was a founding student at The Expeditionary Learning Middle School, said Richard Richardson, who was one of the founding teachers at ELMS and is the principal of Danforth Middle School. One project Scott participated in at ELMS included researching local abolitionist heroes, Richardson said.

“Eurain has lived all over the city but when we find these special landmarks in our community and show them to young people it instills a sense of pride,” Richardson said. “Eurain’s a pretty prideful young man. He was back in those days too. When he has an idea, he sticks with it. He’s passionate about it.” Richardson said when Scott found out about the goal to start an expeditionary learning school at Danforth, he asked to be a part of the process and to provide free photography services.

Scott said he is proud of living in Syracuse and sees himself staying in his home city.

“Essentially the city just needs more people that are going to help and give back,” Scott said. “I’m not only just talking about financially, but just emotional support for the community too.”

Scott said he hopes to use photography to uplift the Syracuse community and eventually provide jobs and new opportunities to other aspiring photographers and videographers.