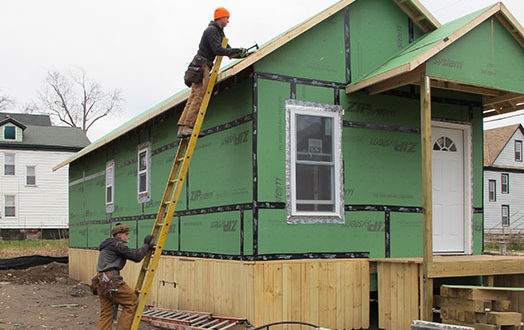 Early one November morning, Andrew Lunetta drives a nail into the roof of one of the new units on Bellevue Avenue. | Ashley Kang, Staff Photo

Andrew Lunetta dug his shovel into the ground, creating a small trench in the dirt. Pieces of plywood lay nearby, baking in the hot September sun. The plot of land at 208 Bellevue Ave., empty as it was, might not have looked like much. But Lunetta regarded it as a solution, a potential answer to a national problem: homelessness. 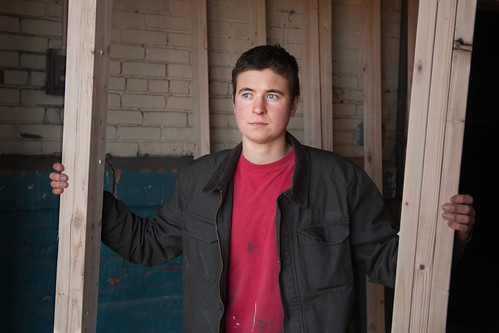 Now, just three months later, Lunetta has built four very small homes, each around 200 square feet. He, alongside a couple of dedicated volunteers, has constructed the walls and laid down the flooring for each of the new homes, fitting each one with windows and furniture.

The houses, set to be completed this winter, will provide permanent housing for the homeless, specifically homeless veterans, in Syracuse.

“People see homelessness as someone panhandling on the side of the road, or overdosing, but it’s not really like that,” Lunetta said.

“These are people who have jobs or are struggling and need a place to live.”

These homes are not Lunetta’s first: He has built three tiny homes on South Salina Street and a two-unit home on Rose Avenue.

Lunetta first came up with the idea while volunteering at Oxford Street Inn, a local homeless shelter. Once a person moved out of a shelter, he was either on his own or assigned to housing with a roommate, an arrangement that usually did not work.

Bob Dougherty, a former city council member and board member of A Tiny Home for Good, said shelters do very little for long-term stability.

“Guys would end up back at the shelter in a matter of weeks,” he said.

Lunetta reasoned that homeless veterans, some struggling with post-traumatic stress disorder, would be better suited in a single-room occupancy. From that insight, the small homes project was born. 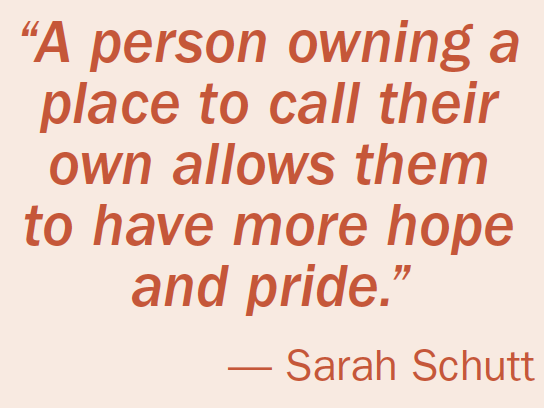 Sarah Schutt, an administrator at the Housing and Homeless Coalition of Central New York, said homelessness is an issue in the region — last year, there were 442 homeless people in shelters in Onondaga County; 17 of them were veterans.

Though these numbers are lower than other cities of the same size nationwide, Schutt said programs like A Tiny Home for Good address larger problems in the city by reducing the serious problem of people lacking shelter. Homeownership also provides a psychological boost.

“A person owning a place to call their own allows them to have more hope and pride,” she said. “And if we can give them any ounce of that, we can improve the community.”

Veterans get their own space, are able to create a small community, get opportunities to interact with one another and also have easy access to a bus line — many don’t have a car — which gives them access to the larger community of Syracuse.

Tenants must give only 30 percent of their monthly income to rent. Lunetta said any person can be chosen to receive a small home, but the nonprofit tends to choose veterans.

Residents of the homes said they are beginning to assimilate to their new lives. One man, Ted Bauer, is a veteran who previously lived on Norman Avenue. While living there, he said local drug dealers killed his dog. He fell into a severe depression.

Now in one of the tiny homes, Bauer bikes every day and feels a lot more hopeful.

“I was angry, I was frustrated,” he said. “The tiny homes helped me regain my footing.”

Another tenant, James Hall, served at an American base in Germany before moving to the Syracuse area, where his brother lived, in 2008. He lived in a homeless shelter before moving into a tiny home last summer. He now works at the Syracuse VA Medical Center.

Though Hall wishes there was room for a large stereo system to listen to his extensive metal collection, he said he has a tiny boom-box perfect for his space.

“You can’t beat the price,” he said, smiling.

Lunetta said he has noticed residents becoming more comfortable with their new space. He recalled how one day last winter, he showed up to a property to shovel snow off walkways, only to find a resident had already done the work. He said he hopes the same kind of tiny community will form in the new properties being added on the South Side.

For him, there has been no “big” victory, but a series of small ones along the way. He said a resident who had been opposed to the plan came to the ribbon-cutting for the first tiny homes in a show of support.

“That made me feel confident in my decision to go forward with the project,” Lunetta said.

Councilor Dougherty said he agrees that though success may appear slow, progress is there.

“It’s not the answer, but it is definitely part of the answer to end homelessness,” he said.

• Residents Speak Out Against Tiny Homes