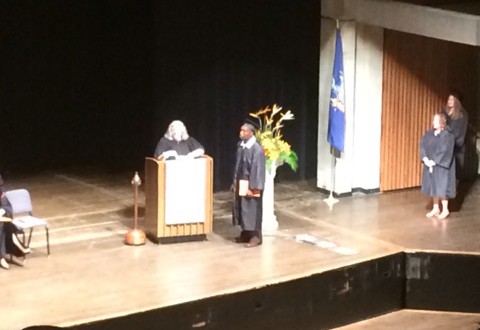 Charles Rivers, who has had a year full of growth and accomplishments, walks across the stage to accept his bachelor’s diploma June 5 at the Civic Center.

What a Difference a Year Makes

Just over a year ago, we met Charles Rivers in a special in-depth journalism project on segregated housing called My Housing Matters. 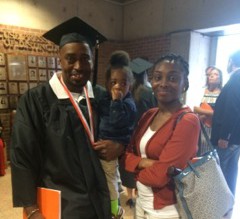 Charles Rivers stands with his daughter and his oldest grandchild after graduating.

We reported that Rivers, his wife, their daughter and a newborn grandchild along with a nephew they had recently taken in had outgrown their current rental. Rivers, who at that time had a seasonal job with Onondaga Earth Corps. and subsided his monthly rent with Section 8 vouchers, was happy in the house that had been their home for the past 20 years, but now saw that they needed more space.

But a year later, the family has jumped forward.

“It’s been an awesome year,” he said. He also completed a bachelor’s degree in human service from SUNY Empire, welcomed his second grandchild, is preparing to take the helm as the Inner City Rotary president and bought the home he had been renting.

A big contributor to his success he says was the article, which inspired him to reach farther.

“That article really gave me a lot of motivation,” he said. “It gave me a chance to sit back and look at myself, look at what my situation was and figure out a way to improve some things and move away from some thoughts.”

Shortly after the article came out the family took their first family trip, which was a much-needed break for Rivers who had been working several part-time seasonal jobs along with attending college full-time.

“Securing a full-time job with benefits really provided the stability Charles was looking for and needed,” said Gregory Michel, executive director of the Onondaga Earth Corps. “Charles was always ready to learn and excited to take on new projects, and we helped him secure additional part-time work with the school district. We are sad to see him go, but it’s good that he is not having to race to three different jobs any longer.”

“I saw that I needed a break,” Rivers added. “That vacation really gave me breathing room and changed my perspective.” 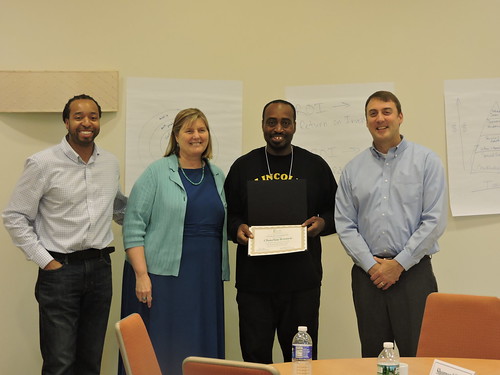 This past year, Rivers also completed the Nourishing Tomorrow’s Leaders Class with the Gifford Foundation and received a certificate for completing the Leadership Classroom training with the CNY Community Foundation (pictured here).

Upon his return, he started his full-time position with PEACE Inc. on the East Side and was later promoted to a center on the South Side.

“It’s been an active year for Charles,” said Rasheada Caldwell, center coordinator for PEACE Inc.’s Eastside Family Resource Center, one day last month when she stopped in to check on Rivers at the South Side center. “He’s accomplished a lot.”

Rivers also began thinking about buying his family’s current property instead of moving.

“A lot of my life has been spent in this house,” he said. “And because it also has an apartment upstairs, we can keep that as a rental property to help cover each month’s mortgage payment.”

He closed on the house March 3 with a closing fee of $68.75. Another huge factor in being able to become a homeowner and not renter, he says, was working on his credit.

“The owner told us the only way he would sell that house is if we bought it, and he said he would ensure we could afford it,” Rivers said. “Our whole team involved, from the lender to the lawyer, was supportive and it was an amazing thing to happen to our family.”

Then by April he was promoted to his current position as the program coordinator for the South Side PEACE Inc. center, which is right around the corner from his home. “This job gave me a footprint in the community, and it made me feel like this is where I belong.”