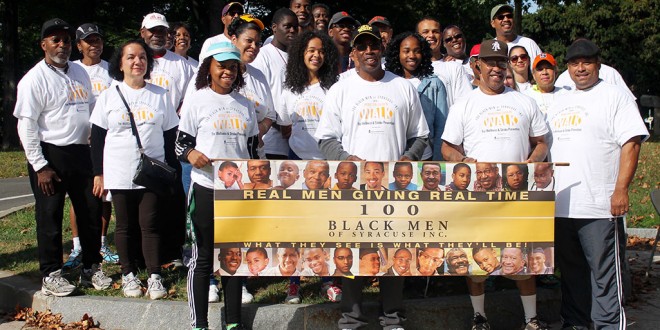 Members and supporters of 100 Black Men of Syracuse gathered Saturday to promote healthy lifestyles in the African-American community. 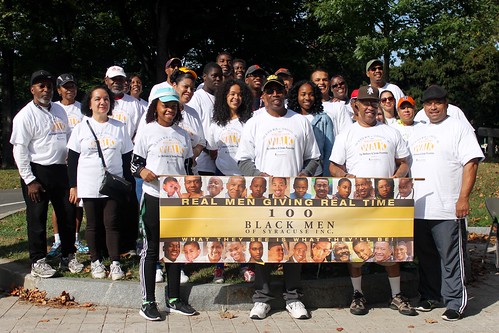 About 50 people attended the Winston Gaskin Walk for Wellness and Stroke Prevention on Sept. 26, which is more than in past years, according to Drake Harrison, the vice president of programming and chair of the economic empowerment committee for the organization. The goal was to complete three laps around a 1-mile loop, at Upper Onondaga Park, but members hope that participants use this event to change other harmful habits.

“This is just one of the initiatives that we do under our health and wellness component of the organization,” Harrison said. “Hopefully not only will people continue walking but they’ll make healthy choices and we’re trying to provide that image to the community. 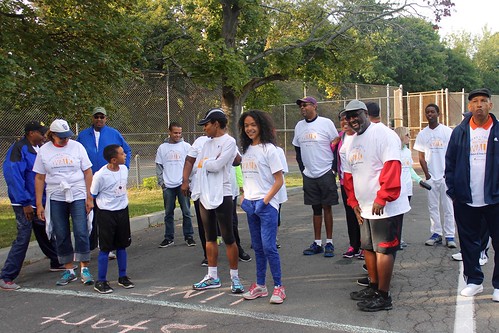 Participants line up at the start line for the 2015 Winston Gaskin Walk. Kieasha Campbell, center, said she did the walk because she wants to join her school’s track team in November.

“I just met her today and I needed a buddy,” Gregory said. “It was great fun.”

The walk specifically addressed stroke prevention because African-Americans have a higher risk of the condition. According to the Centers for Disease Control and Prevention, black people have nearly twice the risk of having a first stroke as whites and are also more likely to die after a stroke than white people.

Pat Tenace, a stroke nurse from Crouse Hospital, attended the walk to talk about stroke care and prevention. Onondaga Healthy Families also had a representative available to talk about community resources regarding primary care, breastfeeding education, fatherhood programs and other services for new parents. 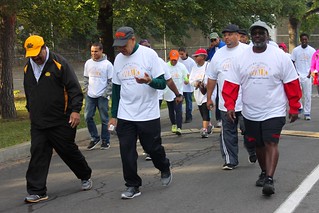 Throughout the walk, people talked about the importance of health and wellness. Charles Anderson, center, chair of the health and wellness committee, said this issue is important to him because his sister died after suffering four strokes.

100 Black Men of America is a national organization with local chapters that focuses on four areas: mentoring, education, health and wellness and economic empowerment. The Syracuse chapter hosts college preparation classes for youth, a tour of historically black colleges, workshops concerning financial literacy and programs with local health organizations, like Vera House and the Red Cross.

Harrison has been a member of 100 Black Men of Syracuse since its inception in 2006 and said he joined to make an impact on others’ lives.

“When I was younger I had a number of mentors that helped me through life,” he said. “So I made a promise that when I became an adult and was in a position to give back I would.”