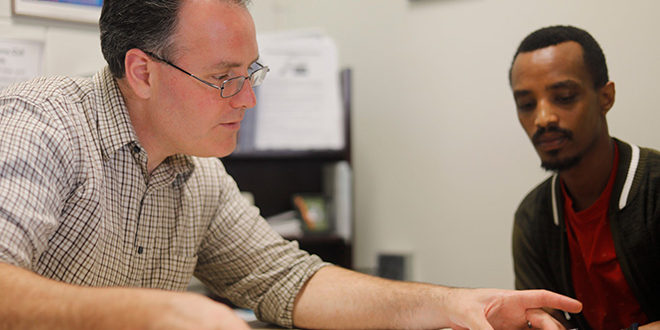 Empowerment counselor Thom Dellwo works with Serge Muhire advising him to work on his credit by applying for a credit card. | Cherilyn Beckles, Staff Photographer

Citizens get free financial counseling and guidance from new program

Seriously, you need counseling. Financial counseling to be precise. That’s the premise of a free city service — that every Syracuse resident, regardless of zip code or income level, can benefit from sitting down with a certified financial planning expert. Especially when it doesn’t cost a nickel.

“Everyone can use this,” said Mary Margaret O’Hara, manager of the city’s recently established Financial Empowerment Center (FEC). “I’m trying to get my Mom to use this.”

What’s offered is not a group seminar or lecture. You call and make an appointment at one of the eight centers throughout the city. You bring your bills, a recent bank statement, basic health insurance information, a pay stub and your I.D. You should also bring a willingness to candidly discuss your finances and goals with one of the four city-contracted counselors. The initial confidential, one-on-one, session can last as long as two hours. Follow-up sessions are free as well.

Launched nine years ago by New York City in response to the economic devastation wrought by the collapse of the housing market, the FEC concept has caught on nationally with 33 cities on board. Funding for two years comes from Bloomberg Philanthropies. After July 2021, Syracuse will need to sustain the local program on its own through grants, corporate partners and other sources.

According to FEC’s manager, the center has cut debt for more than a third of its clients, but its overall success is greater than what it can do just for individual citizens. “We’re going to have better, thriving neighborhoods and our community is going to prosper more,” she explained. “Not only is [the FEC] great for yourself, but it’s a great investment in the future of Syracuse.”

Glenwood resident Brenda Muhammad first learned about the free counseling through Syracuse Cooperative Federal Credit Union where she does her banking. Under the counselor’s guidance, she sold her home in Georgia. She had been paying the mortgage for 10 years but rarely used the residence after moving to Syracuse to live with her new husband Keith, a retired Syracuse Fire Prevention captain. Maybe selling a home seems like a no-brainer, but Brenda needed a nudge. Financial practices tend to get entangled with emotions. It was hard to let go of the house and the ties it represented.

“It was a connection,” the retired court clerk said. “It was the first place I ever felt at peace.”

But it was an expensive keepsake.

“I was sending Georgia an allowance,” she joked over coffee.

With the proceeds of the home sale, Brenda was able to open a money market account and pay off her credit card debts using utilities refunds. The sale also freed up funds for her new passion, a non-profit she started called Focusing Our Resources For Community Enlightenment (FORCE).

The city’s Financial Empower Centers have 171 clients so far. On a recent Monday, a new client, Serge Muhire, who immigrated to the U.S. in 2018 from the Democratic Republic of Congo after years in a Rwandan refugee camp, allowed The Stand to observe his initial consultation with empowerment counselor Thom Dellwo at the North Salina office of Cooperative Federal. The interview was friendly but focused. As it proceeded, it became clear that Serge is in a pretty good place money-wise. He earns $14 and hour as a night warehouse worker at a medical supply company. Household expenses are split with a nephew who earns slightly less. Impressively, the 29-year-old North Side resident has amassed $9,000 in savings, despite often sending money home to his brother’s family in Africa. His only debt is a travel loan for his $1,200 flight to America, which he pays off in increments of $180 every five months. His goals include taking college courses, perhaps in accounting, and owning his own home. Thom crunched the numbers and determined that Serge generates a $1,500 monthly surplus more or less.

“In terms of saving and spending you’re doing a good job,” Thom concluded.

His advice: Get a credit card with a $500 limit to establish credit (Serge has no credit score), and either don’t use the card or pay it off in full each month. He also suggested establishing an in-home mail collection point to avoid occasional lost bills that lead to late fees. Finally, he recommended rental insurance, a roughly $20-a-month investment that can save a lot of heartache.

A follow-up appointment was set for December. Serge left the session feeling encouraged, not just about his finances but by the sense that in Thom he had found a new ally in his transition to his new country.

“He is someone who can help me,” Serge said.

Jeff Kramer is a columnist for The Stand. He has written
newspaper columns for many, many years in Syracuse and elsewhere.
To contact him with story ideas, call (315) 420-2619 or email jeffmkramer@gmail.com

— Note additional reporting for this story contributed by Chandler Plante