In an effort to raise awareness about the plight of the working class, Central New York’s Fight for $15 Coalition organized a “minimum wage challenge.”

For March 7 through 11, about two dozen people pledged to live on the minimum wage for their daily expenses, from transportation to food. After taking out money for constants such as housing, car payments and bills, participants were left with $97 for the week, or about $19 a day.

The coalition hoped the challenge would encourage greater support for raising the minimum wage to $15 an hour, up from New York’s current $9 an hour.

After the challenge ended, the group traveled to Albany on March 15 for a rally at the state capitol. Gov.Andrew Cuomo has been outspoken in his support of raising the minimum wage.

Other cities, like San Francisco and Seattle, have already passed laws to eventually raise their minimum wage to $15.

Recently, state Sen. John DeFrancisco, who represents areas of Central New York, spoke out against the wage increase. During his press conference, he encouraged business owners to talk about how the increase in minimum wage would adversely affect their businesses. Jerry Lotierzo, the chairman of the coalition, responded to DeFrancisco’s comments.

“I was shocked by the fact that he didn’t have any low-wage workers,” Lotierzo said. “He didn’t have anyone there who could speak about how difficult it is to
live below that 15 dollars an hour living wage.” 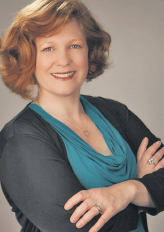 Q: What was the most difficult aspect of the challenge?
A: Much of my lifestyle is designed around eating out. I have social engagements, business lunches … I had prior commitments that I didn’t change. On my Facebook page I talked about how I took a colleague to lunch and that particular colleague doesn’t make very much money, and I bought her lunch. So I broke the rules. I broke the rules several times because it was the right thing to do in any given circumstance. Because the reality is that I was only pretending that I was living on minimum wage. I bought Girl Scout cookies from an inner-city Girl Scout Troop because they actually needed me to buy the Girl Scout cookies that support their program.
What I really noticed is there’s a lot of privilege in a middle-class lifestyle. And most people have some kind of budget that they have to work up against. But where the flexibility in the budget is, varies considerably from family to family. If you’re a solidly middle-class family, you do have areas of flexibility. It doesn’t mean you don’t watch what you spend at the grocery store or limit how much you go out to eat, but you make choices. And you can flex those choices when you want to or when you need to.
I think another big thing I came up against was my pets. I have a lot of pets. And the first time I really, really went over on the budget, I had to buy supplies for my pets.

Q: What did you learn as a result of the challenge?
A: Some of this I kind of knew already, because I’ve worked in human services for a long time, but a lot of people who are in poverty, or living on the edge, they’re women and children. They’re families. Sometimes there’s a perception out there that these are healthy single adults, men, who can take care of themselves and go get a job. But these are people who have a job or are trying to work or are working more than one job and raising a family, and trying to get their kids to school and grocery shop. The list of things and tasks that these people have to do just to survive, it’s exhausting. I just can’t even imagine. I don’t see how you can do it on $97 a week. 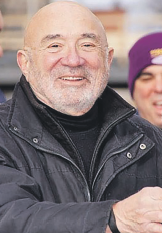 Q: How was your experience?
A: I ran out of money on Wednesday night, because it was just impossible to do some of the things with $97 a week, especially when I needed to buy socks and razor blades. I spent a lot of money on gas because I’m active in the community. I certainly couldn’t do that if I had to live on $97.

I wouldn’t even be able to afford the car, probably. But also, the food. I spent a minimum amount of food for me and my wife, around $50 for the week, but my money ran out quickly. I can sympathize with those people who have to live on that amount of money.
I just don’t know how they do it, especially if you have a cost. Like I had to buy razor blades because I ran out of them, and that cost me quite a bit. In the future, if I was living on that amount, I would buy not such good blades, because I couldn’t afford them. So you have to really do a lot of thinking. You don’t realize if you’re going to live on that amount of money, you have to sacrifice some quality things just for the sake of buying something that you need. So it was very, very difficult.

Q: How did you get involved with the Fight for $15?
A: I’ve been an activist all my life. And my mother demonstrated that to me. My mother once told me, whenever someone is suffering and needs help, stop and help those people. 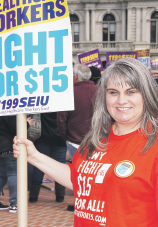 Q: What inspired you to take on the challenge?
A: To try to put a light on what it’s like to live on minimum wage and how desperately we need an increase so that people don’t have to live in poverty while working full time.

Q: What was the most difficult aspect of the challenge?
A: Transportation. We had one day when we were supposed to take public transportation or get rides in to work or to do whatever you were needing to do. I decided to carpool that day, which meant that I had no flexibility in doing what I needed to do. The next day my son, he smashed his hand in a car and we had to take him to the doctor’s. I was just thinking about if I had to try to get him to the doctor’s and I didn’t have a vehicle or couldn’t afford a vehicle, how would I do it? The co-pay was $20 but thankfully I had health insurance. So what would I have done if I didn’t have health insurance? And even the $20 co-pay was a lot of money coming out of the $97 that we were allotted for the week. So making the decision of, “Does he really need to go see a doctor?” Could we have put that off for financial reasons? How does that work for society if you can’t get medical treatment when you need it? 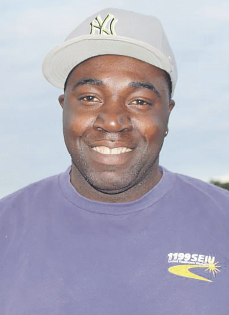 Q: What was the most difficult aspect?
A: As true as I tried to stay to the challenge, I knew that it wasn’t a true representation of what actual low-wage earners go through. Up until about three and half years ago, I was actually making just a little bit more than the minimum wage, around $10.50, $11. And it was difficult then. One of the things that we had to do with this challenge was, we had a specific task that we had to do, and then we had to report on it, whether we took a video with our cellphone or type something up and then post it to social media. When I was actually not even making minimum wage, but just above that — the Internet, cable, television — all of that was a luxury. I just didn’t have it. So even staying within the budget of $97 a week, I realized that there were things that I just automatically take for granted. Because I know, three and a half years ago, I couldn’t do it. There was no way. So even taking the challenge … it’s just one of those things where even the best intentions don’t accurately represent what those folks are going through.

Q: Why do you support Fight for $15?
A: Just the fact that, you know, people hear $15, it’s not as much as it should be. I’m glad the governor came out in support of that. People are only looking at the financial aspects of it. People also need to take into account the dignity that it’s going to give people. Hopefully the decrease in crime that it may create because in taking some of those young people off the corner, the amount of economic growth that it’s going to create, because poor people don’t save money, they spend it. There’s a lot of things that are definite positives, and that’s what I want to come out. I know people have their reservations, thinking that it may cause job loss, and that we can’t afford it. I think we can’t afford not to do it. 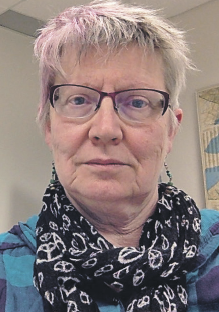 Q: Do you think you’ll change any of your habits or your routine now that you’ve completed the challenge?
A: I’m certainly thinking about how much things cost and whether I really need to buy something or not. The other thing is that — I realized this during the challenge — I think it reinforces my general shopping habits. People are saying that if the minimum wage goes up to $15, small businesses are going to hurt. But I really think that small businesses are being hurt now. Because people don’t have money to spend. I realize I wasn’t able to spend money at the local food co-op, I wasn’t able to spend money to get a sewing job done. So those were all local small businesses that I try to support. And places where I try to spend my money and I wasn’t able to do that if I really lived on $97 a week. So it’s just really important for my goal of supporting local businesses as best I can to avoid the big box stores. Sometimes they’re cheaper, but they’re not as big a part of the community as the local shops.

Q: Anything else?
A: I have a co-worker here who has three kids who also was taking the challenge, and she says, ‘I went broke.’ If I had kids to support on minimum wage, I just don’t know how I would do it. Between rent and food for kids, there’s just no way people can survive. And even if they’re two people doing two jobs, that’s still not a whole lot of money. I just question the fairness and justice. When you lift up everybody from the bottom, we all benefit. The vast majority of us will benefit.