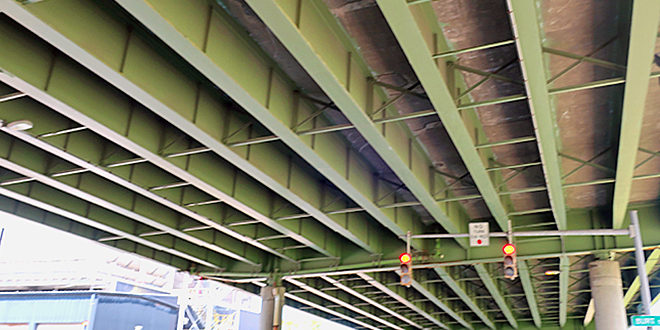 For years, the state Department of Transportation has studied options for removing and replacing the aging viaduct portion of Interstate 81. | John Adams, Contributing Photographer

A recent reader survey told us less than 20 percent of South Siders surveyed remember seeing a South Sider quoted in the last article they read about the I-81 project.

This lack of coverage on how residents feel about the future of I-81 is problematic because much of the neighborhood will be disproportionately affected by the construction to either replace — or more likely remove ­­— the elevated 1.4-mile stretch of the interstate currently cutting through the city.

Of course, every story in The Stand quotes South Siders. We work to bring as many South Side voices on to the fore as possible, especially on a project as controversial as I-81.

Here are three letters from Vincent Love, who was named CEO of Blueprint 15 this past July; Jackie LaSonde, a volunteer with the Central New York Chapter of the New York Civil Liberties Union, and Deka Dancil, president of the Urban Jobs Task Force.

Located within the 15th Ward is a Public Housing complex called Pioneer Homes, where I was born and raised. I was somewhere around 10 to 12 years old when the construction of I-81 brought dramatic change to the neighborhood that I called home.

Familiar landmarks I had become used to were no longer there. Gone were some of the homes and the people who lived in them. Even if I didn’t remember all their names, they were still part of my neighborhood.

Also gone, were some of the store fronts of small business, churches and other places that served as landmarks to me as young man, letting me know I was in familiar territory. Walking paths that led me to Crouse Hospital, Syracuse University Women’s Building Gym, SU Library and Archbold Stadium were now blocked by fences, concrete walls or other obstacles. The construction of I-81 not only altered the environment but also limited my ability to move about and restricted my access to resources in the community that were contributing to my development as a young man. The negative impact brought upon this community back then is still painfully present today but has snowballed into a much larger problem.

So now we are back to the same place in a different time. Talking about what to do with I-81 and how it will impact the neighborhood. My approach to this conversation is a bit different because I believe we must look at this question from a holistic approach that goes beyond the I-81 project and consider the neighborhood as a whole.

Understanding that I-81 is past its useful life means doing nothing is not an option. So, there will be disruption to the neighborhood in some form.

Therefore, we should use this as an opportunity to do a greater revitalization of the whole neighborhood and create an environment that brings back the resources and opportunities for healthy, productive lives for all current and future residents.

I have been involved with the I-81 Project. I discovered the bridge a topic of conversation and then learned of the three options offered: repairing or replacing, the community grid or a tunnel. I moved here in 2016 and purchased a home not far from I-81 which is near my backyard at the end of my dead-end street of Corning Avenue.

I volunteer with the Central New York Chapter of the New York Civil Liberties Union (NYCLU) with Lanessa Chaplin, a NYCLU attorney, who heads up a community group.

It has been challenging to get more continuous communication involvement and engagement. I have attended several workshops and informational meetings held since last year. Unfortunately, there is a short attention span for this project due to the many times it has been discussed over the years. We continue to go to different community lectures and informational sessions hosted by either NYCLU or the New York State Department of Transportation (DOT).

Currently our NYCLU group continues to provide postcards to all South Side residents. We ask them to share their specific concerns such as relocation plans or job availability for community residents to when the bridge project will happen and a host of others. The NYCLU realized South Siders’ concerns need to be presented to inform DOT that our concerns and demands are unlike our neighbors to the North and West, who seem to center worries around traffic and the residents getting home later than usual due to assumed gridlock.

The irreparable community disassembly and landlocked harm that has occurred and continues to occur needs to be corrected, because we will be able to see Syracuse University and have accessibility to it for the youth and progressive people in this community. Not to mention the environmental pollution that will dissipate when the street level community grid is in place. This option is an environmentally friendly transportation system with plenty of trees to absorb the harmful emissions which have plagued the playgrounds and homes in I-81’s path.

I feel it is high time to move forward in a better manner and not continue the concentration of poverty, limited transportation and lack of walkability issues. This is a step in the right direction to remedy the environmental devastation that is taking place here up to this moment.

Did you know that the I-81 Viaduct Project is about to bring 1,000s of good paying, I’m talking $30/hr or more, jobs right here to our city in Syracuse? Not dozens, not hundreds, thou-sands. Did you also know that if you live in the city, you probably won’t have a shot at even applying for one of those jobs? Now you are probably asking yourself, why the heck not?!

Let me ask you another question: have you ever paid attention to who was working on the never ending number of construction sites in our city? According to the Urban Jobs Task Force and Legal Services of CNY’s Racial Equity Impact Study, our construction trade industry is made up of mostly white males who live in the suburbs. That is why they are who you will mainly see working on those sites.

So what does all this mean? It means that if the I-81 Viaduct project construction started to-day, a very small percentage of Syracuse residents would work on the project. We have heard many community leaders and elected officials going around saying the project will be a “job changer” for Syracuse. That’s not entirely true. The I-81 Viaduct Project can be a job changer, but that will only happen if we take action as a community. Let me repeat the urgency of this issue one more time for the people in the back: if we do nothing, our city will lose out on 1,000s of good-paying jobs.

Whatever the case COULD be, we know that it IS a fact that only ONE person can make sure some of that $600 million in wages goes into the pockets of Syracuse residents. Who is that person? That person is you, dear reader.

So what can you do to ensure that Syracusans are able to work on the I-81 project? Go to www.ujtf.org and sign our petition. Become a UJTF member.
Tell everyone you know about this. It is time to revitalize our city, not just the infrastructure and business economy, but the people too.